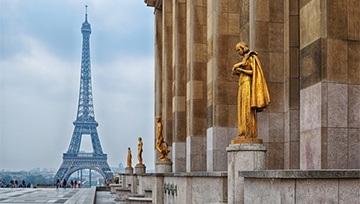 - Last week started with a gap in the US Dollar as EUR/USD broke-down to fresh yearly lows. As looked at last Tuesday, a bull trap had appeared on short-term charts around the US currency. A late-week sell-off in USD helped EUR/USD to recover from an early-week bearish breakout down to fresh yearly lows, and the pair continues to retrace with prices now trading back-above the 1.1400-handle. The November-high came in at the top portion of this resistance zone around 1.1500; and the question at this point is whether sellers show-up to offer lower-high resistance inside of this level, or whether fresh monthly highs print as buyers continue to recover prior EUR/USD losses.

- It’s a holiday-shortened week in the US, and this brings a lighter economic calendar with only a handful of high-impact events. There does remain risk around key events of Brexit and the European Commission/Italy theme, and the low-liquidity backdrop around holiday markets can bring even sharper moves than normal. Traders will likely want to be very careful in the latter-portion of this week, as Thursday brings Thanksgiving with ‘Black Friday’ following on the day after.

The US Dollar pullback continues following last week’s opening gap that saw buyers push up to fresh one-year highs. As I had warned in last Tuesday’s webinar, a bull trap had developed in the US Dollar and that began to fill-in later in the week. Prices pushed back to support around where that gap had shown, and after a pause, sellers took over to push the Dollar down to fresh weekly lows. At this point, sellers are continuing to push so far on the fresh week, with prices dipping below the 96.47 level. This is the 23.6% Fibonacci retracement of the 2011-2017 major move in USD.

Prices are now approaching the bullish trend-line that started around the September FOMC rate decision. This connects with the mid-October dip in the currency, and this trend-line projection helped to mark support in the US Dollar in early-November. A bit-lower is another zone of interest between 95.86-96.04; as each of those prices are mid-points on Fibonacci studies from 2001-2008 and 2017-2018, respectively. Perhaps more importantly, this zone had actual impact on price action as 96.04 gave four separate resistance inflections in October before buyers were able to push higher.

This week’s economic calendar is lighter than the outlays of the past few weeks, and the Thanksgiving holiday on Thursday along with ‘Black Friday’ the day after will likely keep liquidity levels low in the latter-portion of the period.

Despite the less impactful data outlay, there remains a couple of big issues for global markets. Brexit continues to carry an immense number of questions, as last week’s progress has been seemingly beset by even larger drawbacks and more high-profile resignations. And in mainland Europe, the question remains as to what the European Commission might do in response to last week’s re-submission of virtually the same Italian budget that the EC had rejected in October. This is unchartered territory for the Euro-Zone, and the template by which this plays out can have long-run repercussions for member states in the EU.

From the economic calendar, tomorrow brings a bit of interest around Mark Carney’s testimony in front of the Treasury. Brexit will, without a doubt, be a hot topic of conversation. Be careful around ECB meeting minutes on Thursday, as these will be published at 8:30 AM ET with most of the United States already on holiday.

DailyFX Economic Calendar: High-Impact Releases for the Week of November 19, 2018 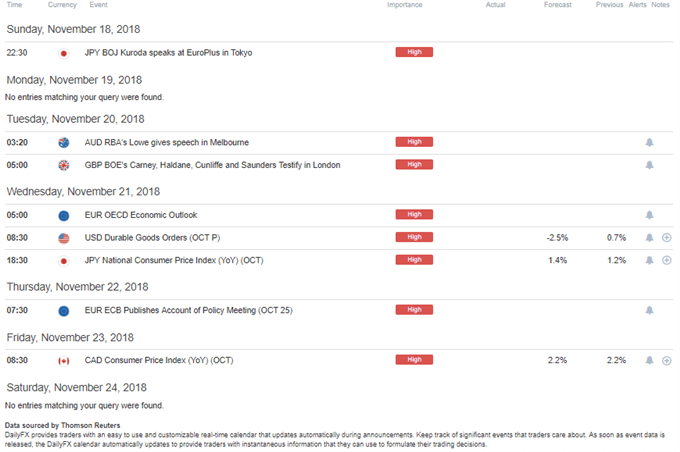 Last week started with a bang in the Euro as EUR/USD began to drop shortly after last week’s open and prices soon pushed down to fresh yearly lows. Around mid-session on Monday, however, sellers slowed the aggression as a key Fibonacci level neared at 1.1212, and the rest of the week saw prices in the pair retrace and move back above 1.1400.

Last week brought a number of twists and turns in the still-developing Brexit scenario and to date, we still don’t know how this is going to shape up. Theresa May did get a deal strung together but it seems to have cost her a portion of her cabinet as last week saw a number of high-level resignations. At this point, she has to gain approval of the plan in Parliament, which looks not very likely; and EU negotiators have put up the appearance that there is little room to modify the plan that would still have their approval. Theresa May’s next objective is to meet with the EU’s negotiator, Michael Barnier in Brussels; but regardless of any optimism that may show there, the obstacle remains in getting this draft approved by British Parliament. There also appears to be the outside chance of a leadership challenge, which would only serve to make the entire situation around Brexit even more opaque.

For its part, GBP/USD remains in the three-month range between 1.2671 and 1.3300. Despite a number of different drivers and themes that have shown up over this period, neither bulls nor bears have been able to drive anything that resembles a lasting move. For those with longer-term stances, they would likely want to wait for some element of resolution shows up here before picking a direction.