US Dollar Pulls Back as USD Bulls Take a Breather

US Dollar Pulls Back as EUR/USD, GBP/USD Sell-Offs Take Pause

- This week started with a bang for the US Dollar as the currency gapped-higher and continued to run to fresh yearly highs after the start of this week’s trade. The currency topped-out on Monday, and since then sellers have been taking control as indicated by a series of lower-highs. I had warned on Tuesday of a brewing bull trap in the US Dollar, and that potential remains as the lower-highs are coupled with a horizontal level of support, building into a descending triangle pattern that will often be approached in a bearish manner.

- Next week’s economic calendar is light and Thursday is a holiday in the United States in observance of Thanksgiving. Black Friday follows and this is generally a low-liquidity period in markets, and this can create a dangerous backdrop as low-liquidity conditions will likely be populating markets as a series of pensive themes remain in the headlines. This can create sharp, unpredictable moves, particularly in the latter-portion of next week, and traders should exercise caution in such conditions.

A Number of Major Themes Remain as US Holiday Approaches

Next week brings Thanksgiving in the United States, which means that the latter-portion of next week will likely be populated by low-liquidity conditions. Combine this with the number of outstanding macro issues, and this can create a difficult trading environment as very sharp moves can emanate from even small developments in these themes, much less the large changes that could very easily take place. In the UK, there may be a challenge for leadership as Theresa May faces a tough road ahead in trying to get her deal approved by Parliament after a series of high-profile resignations. And in Europe, we’re waiting for the next shoe to drop as to what the European Commission will do in response to Italy ignoring their budgetary advice. Neither side looks ready to yet give, and it’s this very same tension that triggered bearish runs in the Euro this year during April-May and then again as we traded into Q4.

The economic calendar for next week is rather light as there are only a handful of high-impact issues on the docket.

DailyFX Economic Calendar: High-Impact Events for the Week of November 19, 2018 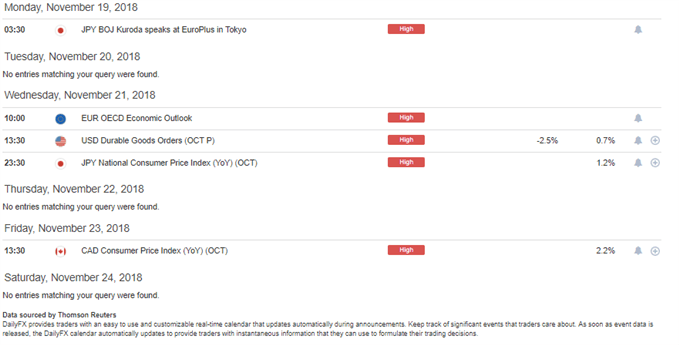 US Dollar Bulls Pause at 97.00 After the Week Started with Fresh Yearly Highs

The US Dollar gapped-up to start this week’s trade, and prices just continued to run-higher as bulls continued to push. This left an exposed area below prices and on Tuesday, I looked at this being a bull trap type of scenario in the US Dollar. Well, that gap has now filled and prices are continuing to test support around that area but, as of yet, buyers have not been able to take-control of the matter to push the currency back into that bigger-picture bullish trend. As a matter of fact, from short-term charts, there’s a building bearish formation that may be indicating a short-term move lower before that longer-term bullish move might be ready to resume.

On the hourly chart below, we’re looking at lower-highs since that Monday ramp combined with a horizontal level of support, creating a descending triangle pattern. Such a setup will often be approached in a bearish manner, expecting the motivations that’s pulled bears into the market at lower-highs to eventually overtake the horizontal support that’s continued to hold the lows.

Taking a step back, there are a number of interesting support levels for the longer-term theme. I had looked previously at the level around 96.47, which is the 23.6% Fibonacci retracement of the 2011-2017 major move in USD. Alternatively, a confluent batch of support exists around the 96-handle; although this comes-in below the bullish trend-line that’s held the lows in the currency since the September FOMC meeting. But – on the other side of the argument this would still be a higher-low from the prior November swing that bounced off of that trend-line previously, so the door could still remain open for bullish strategies if this confluent zone comes into play.

Going along with that early-week breakout in the US Dollar is an early-week breakdown in the Euro. The single currency was slammed after this week’s open and bears retained control until the long-term Fibonacci level at 1.1212 came near. Sellers pulled up just shy of a test of that level and over the past few days, a retracement has continued in EUR/USD.

On Tuesday, I warned against chasing the pair-lower, instead looking to two possible resistance levels based off of prior support. Given the amount of attention at 1.1300, I advised to add an additional level of reference at 1.1355, and this continues to help hold the highs for now a second day of trade. But – similar to what was looked at above in the US Dollar, a short-term formation has developed that may hinder the longer-term move, and that’s an ascending triangle formation with horizontal resistance coming-in around that 1.1355 level. This could spell a deeper retracement in the bearish trend before the long-term move lower is ready to resume.

GBP/USD: Mayhem in the British Pound

So, it was a pretty volatile week for the British Pound. Headlines around Brexit were very active this week, supplying short-term traders with a number of moves but, as of yet, price action has respected the range that’s built-in over the past few months between 1.2670 and 1.3300.

Perhaps most troubling around this theme at the moment is the lack of resolution. We still don’t know how any of this is going to play out because each small success seems to be coupled with a similarly-sized, if not larger setback. Taking the draft of the deal as an example, Theresa May got her cabinet’s approval. But, she lost a large portion of her cabinet in the process. Now she has to take her plan to Parliament where she faces stiff odds of gaining approval, and there’s still the chance that she faces a challenge on the leadership position so we may not even yet know who exactly will be pitching this deal to the EU.

This can be a dangerous scenario for traders over the weekend, as gaps can certainly show up around these headlines and this remains a fluid situation in which its very reasonable to expect at least some movement after market close. Traders may want to look to steer clear of GBP markets around this weekend.

For longer-term traders, a break of this multi-month range can open the door for big-picture strategies. I had looked into the matter during yesterday’s webinar.