US Dollar to Fresh Yearly Highs as Dow, S&P Bounce at Month-End

- The US Dollar has broken out to a fresh yearly-high as markets wind down the first month of Q4. That theme of USD strength has become rather pronounced in Q4, with a hastening of bullish price action over the past two weeks. Risk aversion items remain of interest, as the next couple of weeks bring US mid-term elections followed by the expectation for a revised budget draft out of Italy.

- Stocks are bouncing as markets near month-end, and this comes after a brutal month of October for the risk trade. US stocks punched up to fresh all-time-highs in the first days of Q4, but then spent the remainder of the month in some form of sell-off until support began to show over the past two days. Both the Euro and British Pound had difficult months, as headline events around each economy have gripped traders’ attention.

The US Dollar is putting in another strong topside breakout this morning, rising to a fresh 2018 high to continue what’s been an impressive two weeks of price action. This was a focus market in yesterday’s webinar, as a continuation of US Dollar strength has been a pivotal theme across FX markets so far in Q4. As markets move to wind down the first month of Q4 with the November open tomorrow morning, that topside breakout has continued to run as buyers have bid the currency-higher beyond the 97.00 level, which was last traded at in June of 2017.

There still remains some key risk events on this week’s economic calendar to go along with the November open. Tomorrow morning brings a Bank of England ‘Super Thursday’ rate decision, and Friday morning brings Non-Farm Payrolls along with Canadian jobs numbers. On the equity side of the ledger, today after market close will bring Apple earnings for the most recent quarter, and this could be a driver across US tech stocks, which have led the way-lower during the October sell-off in American equity markets.

Next week brings another key driver as mid-term elections are set for Tuesday. This could bring a large bearing on the risk trade depending on how the results roll out.

DailyFX Economic Calendar: High Impact Events for the Remainder of This Week 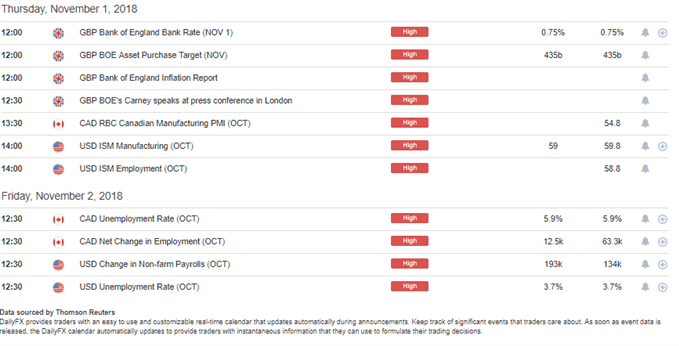 Stocks Catch a Bid Ahead of Month-End

So far this week has brought a change in tonality from the bearish trends that drove stock prices lower for most of the month. The Monday open brought more selling, but a bit of support showing near market-close held through yesterday, and eventually bulls were able to make a mark by pushing prices higher throughout the session. Prices are continuing to run-higher today, adding a bit of hope that the worst may be over from this recent swing-lower.

But be careful with that, at least for right now, as we may be seen month-end flows after what became a brutal period for US stocks. Mid-terms on the calendar for next week remain a risk event, and we haven’t exactly seen the Fed back down from recent hawkish rhetoric, nor has there been any positive items yet showing on the Chinese tariff front.

In this week’s technical forecast, I had outlined a level on the Dow that I wanted to see re-claimed before opening the door to bullish approaches. Prices are nearing that level ahead of this morning’s US market open, so watching to see whether buyers can continue to push, and whether higher-low support shows at this level to further indicate bullish continuation remains to be seen. But – if this does take place, the door soon may re-open to topside strategies in the Dow.

EUR/USD Stuck Between a Rock and a Hard Place

EUR/USD weakness continues to show, but prices may be nearing a difficult area for Euro bears. The level of 1.1300 is the yearly low, and this price held up a strong down-side run when it was encountered previously in mid-August. That support level helped to stop the bearish trend on a dime, and in short order bullish price action followed as the pair drove back to the Q3 highs ahead of Quarter-End.

But Q4 has brought sellers back into the mix as the debt stand-off between the ECB and the Italian government continues to stoke fear around the single currency. Italy has previously said that their revised budget will be sent to Brussels before November 13th, or one week after US mid-term elections.

Ahead of that date, a couple of items on the calendar for next week will remain key. Monday brings a monthly meeting of Euro-Zone finance ministers, and this could bring some additional pressure on Italy to modify the draft of the budget. And then on Thursday, November the 8th, the European Commission will publish economic forecasts that will show whether the EU estimates for growth, debt and deficit projections. If these numbers veer far away from Italy’s own estimates, further pressure may be ahead as the assumptions used by Italy for creating the budget come under additional questioning.

As for price action in EUR/USD at the moment, be careful. Prices have broken below short-term support around the 1.1330 handle, and the yearly low looms just a few pips below current prices around 1.1300. While breakout potential remains, there’s the very real question of how much motivation bears might be able to show below that level as markets move towards month-end. There are likely a bunch of stops sitting below 1.1300, so a tick-below could lead to a quick run of weakness as those stops get executed. But, will the pair be able to elicit fresh sellers while sitting at yearly lows while markets move to wrap up what’s become a busy month of October?