US Dollar Breakout Holds Higher-Low Support Ahead of Busy Calendar

- US equity futures have bounced from support in the overnight session ahead of the US open, and this week brings a busy calendar into the mix as there are high-impact macro items set to be released each day of this week. This is coupled with continued earnings announcements out of US corporates, with this week seeing names like Facebook and Apple reporting recent results. Not to be discounted – a number of headline items remain of risk, and another popped-up this weekend around German Chancellor, Angela Merkel, who announced that she would not seek re-election as the head of the CDU party, a role which she has held since the year 2000.

- From a price action perspective, a number of themes remain in-focus, including last week’s stern topside breakout in the US Dollar to go along with bearish breakouts in both EUR/USD and GBP/USD. Will the Dollar be able to punch up to fresh 2018 highs, crossing the resistance that showed-up in mid-August around the 97.00 handle? Or will the risk trade find its way back after a difficult start to Q4 for global stocks?

US Dollar Strength in Focus for Big Week of Data

This should be a busy week. Price action has posed some interesting moves already in Q4, with a spate of US Dollar strength over the past couple of weeks that’s seen the currency make a fast move towards 2018 highs. Global equities are on their heels as the end of October nears after what’s been a troubling month for the risk trade, and this week’s calendar is loaded with event risk. The macroeconomic calendar contains high-impact announcements for each day of this week, including two major rate decision from the Bank of Japan and the Bank of England. Earnings season continues in the US, with big names like Facebook and Apple set to report results. And big picture issues in Europe and the UK remain in-focus, with the inclusion of another risk variable coming into the equation around Angela Merkel in Germany.

Collectively, this backdrop has so far produced an environment of risk aversion in Q4, and the US Dollar is holding support near two-month highs, right around the 23.6% Fibonacci retracement of the 2011-2017 major move at 96.47.

A Busy Calendar is Ahead

This week’s economic calendar is bookended by two key US items with the Monday release of PCE and the Friday release of Non-Farm Payrolls. In between those two announcements, there will be a couple of additional high-impact US items with Consumer Confidence on Tuesday and ISM on Thursday. The Bank of England rate decision is a Super Thursday event, meaning that the bank will release updated projections and forecasts to go along with the accompanying press conference. No moves are expected here, despite a backdrop that could likely support such tightening. Continued concern on the Brexit front will likely keep the Bank in a passive spot for now. 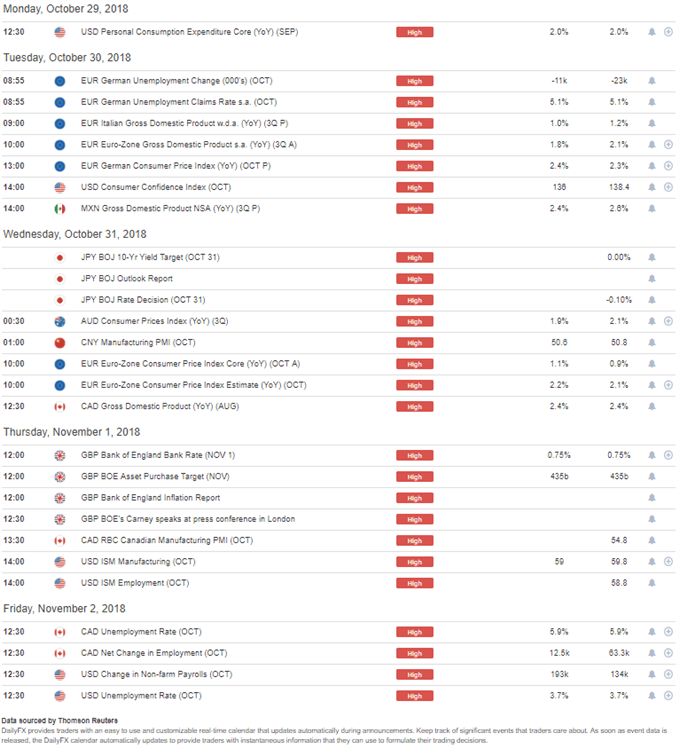 EUR/USD Struggles at 1.1400 As Another Political Risk Emerges

A number of risk items remain of importance around Europe, as the Italian budget continues to present a bit of unsettled discord after the European Commission rejected Italy’s proposal last week. The EU said that Italy must make changes and submit a new budget by November 13th, and the question remains as to whether the recently-elected Italian government will cave to Brussels’ demands.

Over the weekend, another risk emerged, however, and this time in Germany. Angela Merkel announced that she would not seek re-election as leader of the CDU after the party’s coalition suffered a tough defeat in Hesse, one of Germany’s wealthiest states. This follows coalition losses in Bavaria earlier this month, and speaks to the weakening base of support for the German Chancellor in Europe’s largest economy. A key point here – Ms. Merkel stepping down from the top role at the CDU doesn’t necessarily mean that she’ll step down as Chancellor.

It does, however, hit at confidence around the single currency as Ms. Merkel has been atop the party since the year 2000, and this order of potential change rarely goes unnoticed by market participants. Perhaps helping to soften this blow so far on the new week was the fact that S&P Global Ratings left Italy’s credit rating unchanged at BBB, just two notches above junk; and this comes despite cutting the outlook around Italy to negative. There was growing concern that Italy’s rating could be cut on the basis of debt loads and budget spending but, similar to what happened at ratings house Moody’s. But – S&P reiterating a BBB helps to remove maybe just a dash of fear that’s entered the equation over the past month.

On the chart, EUR/USD remains on its heels after last week’s bearish breakout below support. The big question is how aggressive might sellers continue this theme, and the prospect of lower-high resistance at prior support was a central part of this week’s FX Trade Setups of the Week.

Last week was also tough for the British Pound as the currency continued the sell-off that started two weeks ago. I had looked at a setup here last Monday, plotting to use prior support as fresh resistance for bearish continuation, and that filled-in on Tuesday. Since then, it’s been largely a one-way show as prices plummeted down to find support at the prior September swing-low.

Headline risk remains an issue here as little clarity has been seen on Brexit negotiations. Last week did see Theresa May survive the 1922 Committee, but that seemed to matter little to the currency as the British Pound simply continued to fall against the US Dollar until that Friday support began to stem the declines.

This week brings a Bank of England rate decision, and there are few expectations for any actual changes, largely on the basis of Brexit risk in the foreground. Without Brexit, the backdrop may be supportive of near-term hikes, likely around February of next year at the next Super Thursday event; but that is not the environment that we currently have.

The bearish side of GBP/USD was also included in this week’s FX Setups of the Week, looking for resistance at prior Fibonacci support around 1.2877. This was a price that offered a bit of support during the Wednesday sell-off, and this comes from the 61.8% retracement of the 2017-2018 up-trend in the pair. Resistance at this prior support keeps the door open for strategies of bearish continuation.