EUR/USD, GBP/USD Fall to Fresh Lows as USD Breaks Out to Key Level

- US Equity futures are bouncing ahead of the US open, but the big item from the overnight session has appeared to take place in FX for a change-of-pace in October price action. The US Dollar has broken out from the 96.04 resistance level that held the highs on four separate occasions so far in October, and prices have run up to the next big level on the chart at 96.47, which is the 23.6% Fibonacci retracement of the 2011-2017 major move.

- The bullish breakout in the Dollar has shown quite visibly in both EUR/USD and GBP/USD, while both NZD/USD and AUD/USD have held support relatively well over the past 24 hours. A bit of strength has also shown in USD/JPY after yesterday’s test of a key support level just inside of the 112-handle, and this can be a positive for the risk trade as USD/JPY strength has held a degree of correlation with equity strength so far in Q4.

US Dollar Breaks Out From One Resistance Level to Another

It’s been a climactic morning already across FX land, and as somewhat of a rarity of the past few weeks, FX volatility is looking a bit more interesting than what’s taking place in stocks. Global equities appear to be trying to re-gain their footing after yesterday’s spill, but in Forex, both GBP/USD and EUR/USD are breaking out to fresh lows as Dollar strength has priced in rather aggressively.

The US Dollar has put in a clean breakout on the morning as prices ran from one resistance up to the next. The 96.04 level that I’ve been following through October, which previously gave four separate iterations of resistance in the month of October, has finally been taken-out; and prices in DXY made a bee-line for another resistance level on the chart at 96.47. This was in focus during yesterday’s webinar as each of those resistance inflections over the past couple of weeks have appeared to carry less push, leading to an upward sloped trend-line taken off of the lows.

US Dollar Two-Hour Price Chart: USD Breakout From One Resistance Level to the Next

The price of 96.47 is the 23.6% Fibonacci retracement of the 2011-2017 major move in DXY, and that’s the same study that helped to mark the February low all the way down at 88.26. While price action did trade above this level for a couple of days in August, bulls were unable to hold support at this prior area of resistance, and sellers soon came back to reverse the entirety of the previous bullish move over the next seven weeks.

But that slumber appears to have come to an end given the past week of activity in the US Dollar, as last week’s support test below 95.00 has been followed by a rather aggressive rally that’s pushed prices up to the next big level of resistance.

In GBP/USD, I had looked at lower-high resistance on Monday of this week, plotting strategy for short-side continuation after an initial breach below a symmetrical wedge pattern. That resistance came-in yesterday, and prices have been offered down to fresh monthly lows, with a bit of support coming-in off of the 1.2900 handle.

The economic calendar for the next 24 hours has a couple of key items of interest: Today at 10 AM ET brings the Bank of Canada with a widely-expected rate hike, and tomorrow morning brings the European Central Bank for their first rate decisions since starting to taper QE purchases. Of course, additional items of interest are surrounding the ECB at the moment, so the accompanying press conference will likely be key as market participants try to gauge Mario Draghi’s tone on issues such as Brexit, Italy and the bank’s continued drawdown of bond purchases.

DailyFX Economic Calendar: High-Impact Events for the Remainder of This Week 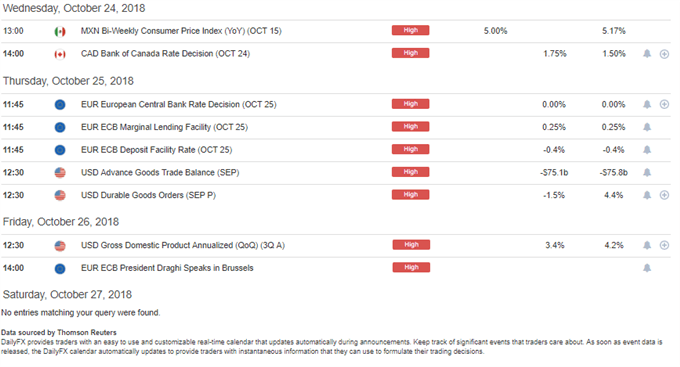 Going into that ECB rate decision tomorrow, EUR/USD has just pushed down to fresh two-month lows, crossing below a stubborn zone of support that’s given trouble to bears for the past two weeks. This is setting up for a showdown at the 1.1300 level the functions as the yearly low in the pair, and this level had provided a rather vigorous bounce when it last came into play in mid-August. This also opens the backdrop for lower-high resistance at that prior zone of support for Euro bears as we approach tomorrow’s ECB rate decision. The big question here is whether sellers we be able to keep pushing as we move towards that meeting.

EUR/USD Daily Price Chart: Testing Below a Big Area of Support Ahead of ECB, Draghi