- US Dollar bears have put in another lower-high resistance reaction to start the week, but a heavy economic calendar for the next five days will likely keep the currency on the move as we wind down Q3. It’s been a really interesting quarter for the US Dollar, as the currency came-in with strength that largely held for the first-half of Q3; after which an aggressive reversal has taken-over to bring back the prior 2017-2018 down-trend. With USD now showing bearish tendencies, will Q4 bring a full-on sell-off back down to key levels of 92.00 or perhaps even 90.00 on DXY?

- Going along that that move of USD-weakness, we have a bullish breakout in EUR/USD that continues to hold. This morning has brought another iteration of higher-low support from an area of prior resistance, and even GBP/USD has put in a recovery after last week’s headline-driven sell-off. Perhaps most interesting over the past week, Yen weakness appears to be back and this can keep the door open for topside strategies in both EUR/JPY and GBP/JPY as we move into the final quarter of this year.

US Dollar, EUR/USD Hold on to Big Themes as End of Q3 Nears

As we move towards the end of Q3, a number of viable themes remain across global markets and this week’s economic calendar will remain busy into the end of the period. Of particular interest is US data, as we have high-impact releases set for each day Tuesday-Friday. On Wednesday, we get the Federal Reserve at a rate decision that’s highly-expected to bring a hike; and it would probably be far more shocking at this point if we didn’t get one. But despite this well-anticipated rate hike along with very realistic prospect of another a few months away in December, the US Dollar has been extremely weak over the past month-and-a-half. This is somewhat of an extension of a theme that became commonplace last year, as the US Dollar dropped by as much as -15% despite the Fed being pretty much the only game in town for rate hikes.

DailyFX Economic Calendar High-Impact Events for the Week of September 24, 2018 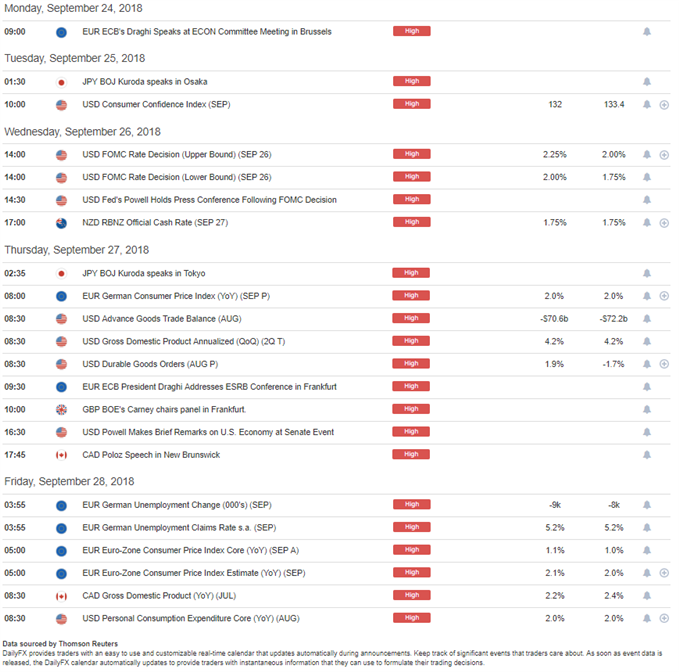 US Dollar Strength Goes on Hiatus in the Middle of Q3

After a two-month spurt of strength that started in Q2, the wide thought was that we were at the forefront of a shift; where the US Dollar could regain prior losses as both the Euro and British Pound sold-off on the back of existential fears from Italian politics or Turkey, or perhaps even Brexit. And while each of these scenarios furnished some element of weakness to the representative currency in Q3, those themes could not hold; and an aggressive reversal in the US Dollar from the middle of Q3-on has left the Greenback in a precarious position as we move into Q4.

We looked into the US Dollar sell-off last week just as the US Dollar broke below a key level of support. The August swing-low in DXY helped to hold the lows in the Greenback for the first part of September. Each support bounce, however, grew weaker as bears began to take-control of USD price action, and the horizontal support combined with the lower-high resistance gave us a descending wedge formation in the US Dollar, and that gave way last Thursday.

Over the past week, we’ve looked at multiple short-side setups on the basis of lower-high resistance showing around prior support. This has now taken place around the 95.00 level that was the May swing-high, the 94.75 area from the middle of last week; and now we have another case of resistance coming-in off of prior swing support, this time taken from the level around 94.33. This keeps the door open for bearish USD setups as we move into the end of Q3.

US Dollar Two-Hour Price Chart: Lower-High Resistance From Prior Support as Bears Take Over

Last week we looked at bullish continuation scenarios in EUR/USD, plotting higher-low support from an area of prior resistance around 1.1725. That level came into play shortly after this week’s open, and prices have put in a respectable bounce since.

As we wind down the end of what’s been a really active Q3 in EUR/USD, the big questions is whether bulls can continue to push after clearing this big zone of resistance. At this point, the Q3 high that was set in July has helped to hold the bullish September advance, and that takes place around 1.1791. But buyers have shown no signs yet of letting up, and if we do take-out this high ahead of the Q4 open, the end of the year brings a set of strong scenarios for the single currency after a very strong six-week run.

GBP/USD Comes Back After a Gnarly Close to Last Week

We looked into this on Friday as Brexit headlines created ripple waves throughout GBP price action. As we move into Q4, this will likely remain as a huge driver to GBP, as we still lack clarity or any element of certainty towards what type of deal the UK may actually be able to strike with the EU. We discussed this earlier in September, and after last week’s example, it looks like this type of headline-driven volatility may be here for a while.

Nonetheless, the bullish bias GBP/USD remains. The support level that we were looking for last week came into play on Friday and held into this week’s open. Bulls have since taken over and we’re now almost 100 pips higher. This support zone runs from 1.3034-1.3065; but any trader working with setups around GBP needs to be armed for strong moves, in either direction, as tensions remain high and clarity remains low.

Yen Weakness as a Primary Theme as we Move into Q4

One of the larger takeaways from the past two weeks has been a re-emergence of JPY weakness, and this comes even as the US Dollar goes through its own bearish patterns. USD/JPY is holding at two-year-highs, and this is a good illustration of that fact, with JPY weakness outpacing that which has been seen in the Greenback as we move towards the end of Q3.

USD/JPY Four-Hour Price Chart: Yen Weakness Comes Back with Consistency, Even Against a Weak US Dollar

As we’ve been discussing, that theme of Yen-weakness would likely be more attractive elsewhere as USD goes through its own gyrations. Last week we looked at topside setups in EUR/JPY as part of our FX Setups of the Week of September 17th, and that setup remains of interest as we wind down Q3. At this point, EUR/JPY has caught support off of a key Fibonacci level at 132.05, and this had previously helped to set the Q3 high. That support has held into this week’s open and prices are now re-approaching last week’s high above the 133.00 level.

GBP/JPY Bounces From a Big Level

We looked into resistance on GBP/JPY as we came into last week, drawing attention to a really interesting level that’s been in-play for some time. This is the price of 147.04, and we saw a double bottom formation form here in Q4 of last year. We’ve seen multiple inflections around this price since then, most recently in July as we came into August when this price helped to set the swing-high ahead of an aggressive bout of selling.

Bulls ran through this level last week, but the Friday pullback saw prices drop right to this price. After a hold on Friday and through the weekend into this week’s open, bulls pounced and that level remains as the most recent iteration of higher-low support. This keeps the door open for topside strategies with bulls pushing towards the 150.00 psychological level in the pair as we move towards the end of Q3 and the open of Q4.