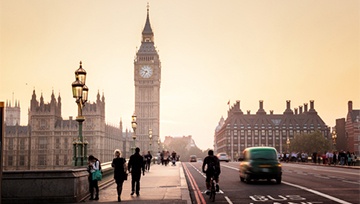 - Next week is the final week of Q3, and it looks to be a prime backdrop for volatility as we wind down what’s become an interesting year of FX price action. The British Pound is on the move this morning as Brexit discussions have seemingly disintegrated in front of our eyes, and it now looks like the UK is going to need to go back to the drawing board. Already, Theresa May is talking up Hard-Brexit options, and this is something that could continue to provide pressure into the Pound.

- Not to be lost in the shuffle, both EUR/USD and the US Dollar put in significant moves yesterday as each broke out to fresh inflection points. EUR/USD is softening after establishment of a fresh Q3 high, while USD is pulling back to find a bit of resistance from prior short-term support, taken around the 94.33 level that helped to set a short-term low on Tuesday and Wednesday of this week.

As we move towards the end of this week, a busy economic calendar is ahead as we approach the final week of Q3. The big item on the morning is an aggressive reversal showing in the British Pound as Brexit discussions have seemingly gone awry. While the currency has been lifted throughout September on optimism of a softened stance from the EU, a rejection of Theresa May’s Chequers plan has brought to light, again, the possibility of a No-Deal Brexit. This has invoked a sharp reversal in the British Pound, and bullish strategies should come into question as this new item or driver gets priced-in to the equation.

A Busy Calendar into the Q4 Open

As we move into the final week of Q3, a number of themes have shown items of interest, particularly around US Dollar pairs following the currency’s breakdown from support. The US Dollar started on a down-trend in January of 2017 that didn’t start to slow until February of this year. Q2 saw a bullish theme develop in the Dollar, but this also went along with some stark downside themes in both the Euro and British Pound. As we walked into Q3, we had the legitimate prospect of a continuation of that Dollar strength, as matters remained fairly risky around both Europe and the UK; and the Federal Reserve was sticking out as one of the few major Central Banks ready to continue pushing tighter policy.

That strength even lasted for the first-half of Q3. The US Dollar jumped up to the first target that we were looking for in our Q3 Technical Forecast on the US Dollar at 96.47; and after a week of stall, a reversal began to develop that continues to hold a bearing on USD price action. That theme gained speed as we traded through the second-half of Q3, and yesterday gave us a significant down-side break to fresh two-month lows; setting the stage for what looks to be a very interesting final quarter of 2018 around USD-pairs.

US Dollar Four-Hour Price Chart: Descending Wedge Breaks, Followed by Bounce Up to Resistance at Prior Support

It looks as though the quarter will finish with high potential for continued volatility, and next week’s economic calendar brings a number of high-impact US items, as we get at least one such release each day next week from Tuesday through Friday.

European CPI numbers will likely be highly-watched, as this could provide further evidence of sustainability for the pair’s bullish breakout. In the UK – we’re likely going to continue to see headlines around Brexit dominating the flow, and we may even get some BoE-speak on that topic when Mr. Mark Carney hosts a speech on Thursday.

DailyFX Economic Calendar: High-Impact Events for the Week of September 24, 2018 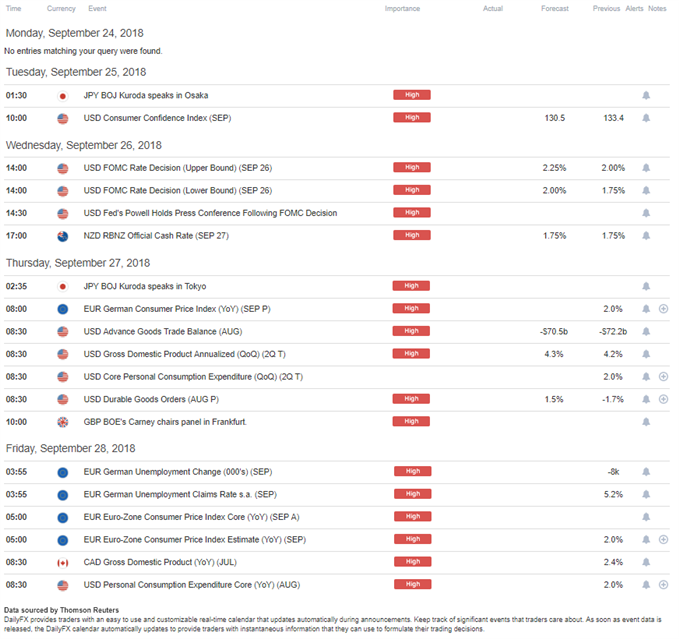 EUR/USD Breaks Out to Q3 Highs

This week’s bullish breakout in EUR/USD was significant for a number of reasons, key of which is the spot on the chart at which this theme took place. There was a build of resistance in the price zone that runs from 1.1709-1.1750, and this area had reversed multiple topside advances.

The latter-portion of July saw a steady outlay of selling pressure develop here, and when we re-encountered this zone in late-August, resistance was able to cap the advance. We saw the pair begin to re-engage with that zone last week; but this time – sellers weren’t able to push as deeply as the prior test in late-August. We looked at the pair trying to form higher-low support earlier in the week, and sure enough bulls were able to hold the line; embarking on another test of this key zone of resistance.

As we pointed out, the increasing frequency with which resistance was coming back into play combined with the higher-lows that were building as evidence of a waning impact of that long-term resistance – it appeared as though bullish breakouts would soon be on the cards for EUR/USD. That finally took place yesterday, and the pair ran-up to fresh Q3 highs.

Now that we’re pulling back, the big question is where in this area of prior resistance might buyers come back-in. We’ve seen a bit of short-term support develop at the top of the zone, around 1.1750, but given the theatrics in the pair this week, this may not be able to hold support. A bit deeper, we had looked at a price around 1.1725, as this around swing-highs from both Friday and Tuesday of this week.

GBP/USD: Is the Bullish Trend in the British Pound Done?

Possibly. It’s still very early in this scenario as we just got that new information this morning, but the singular factor that appeared to shift price action in the Pound as we came into August was that softened stance out of the EU. It appeared as though we were safe to escape away from a Hard-Brexit scenario, and this helped to hold higher-low support in GBP as buyers priced-in a softer landing than what was previously feared.

But – at this stage, it appears as though the UK needs to go back to the drawing board. And Theresa May is openly talking about Hard-Brexit or No-Deal Brexit options, and given the way we saw the currency trade earlier this summer, that would likely be a negative factor for GBP.

At this stage, it’s still early, and traders would likely want to take a step back to let price action show the way. If we do see that continued pressure price-in, similar to what happened in early-August, then we could move forward with a bit more confidence that this morning’s reversal becomes something more with the generation of a new bearish trend. However – if we do see buyers step-in to defend prices around prior areas of interest, such as the 1.3000 psychological level or perhaps even the zone we’ve been following just below that, running from 1.2918-1.2956, there may be a usable thesis for a return of strength in the pair.