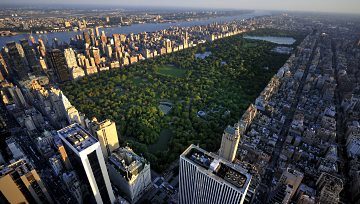 - It’s been a big morning already across the FX-landscape, as we’ve had rate decisions out of Turkey, the UK and Europe. But this morning’s volatility appears to be more driven by a non-Central Bank event, as US Dollar bears have taken over after the release of August inflation numbers out of the US. This has pushed USD/DXY to fresh monthly lows while EUR/USD and GBP/USD have both put in noticeable topside pushes despite a lack of much new information at this morning’s respective rate decisions.

- This makes the prospect of a deeper move of USD-weakness look more likely. We’ve been following the potential for a larger USD breakdown over the past few weeks as signals have started piling up that the two month spate of strength in USD from April and May is losing enthusiasm, and we may be soon nearing another trend of USD-weakness even with a hawkish Fed, much as we saw last year.

Inflation Gets the Attention of USD Bears

It’s been a busy morning thus far as we’ve now seen two major rate decisions to go along with the release of August inflation numbers out of the United States. In somewhat of a surprising twist, it’s the inflation print that’s seemed to elicit a bit more volatility than what was seen out of the Bank of England and ECB rate decisions. While both the BoE and ECB came-in largely as expected, US inflation tilted lower and printed inside of the expectation of 2.8%. Last month printed at 2.9% so we were looking for a draw-down as it was; but this morning saw the print come in at 2.7%. This is the first drawdown to headline CPI out of the United States since December of 2017, and the corresponding move in the US Dollar was noticeable.

US Headline CPI Since August, 2017 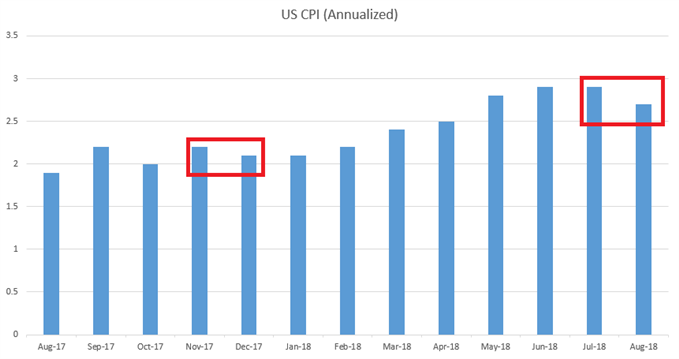 The US Dollar had largely held the line as we walked into this morning’s BoE and ECB rate decisions, even posing a resistance test at 94.94 in the European session before the festivities got underway. But, as the BoE shared a somewhat expected tone while the ECB announced a widely-telegraphed reduction in bond purchases, USD held the lines of support. The release of August CPI came-in right as the ECB press conference began, and this inflation data certainly appeared to get market participants’ attention as a quick rush of selling showed after the data printed.

At this point, the US Dollar is hard-charging at the August swing-lows around the 94.50 level. Given the veracity with which this selling pressure has shown, that support may not be able to hold up the declines for long. If it does elicit a bounce, the door could quickly be re-opened to short-side strategies, looking for that theme of USD weakness to continue on to fresh monthly lows.

This adds further evidence towards a topic that we’ve been discussing over the past few weeks, and that’s the prospect of a return of USD weakness.

The US Dollar spent 13 months selling-off from last January into this February. Eventually, DXY ran into the 50% marker of the 2011-2017 major move, and this helped to stall the declines for the next two months; but in April a blip of strength began to show as both EUR/USD and GBP/USD started on bearish reversals. That theme lasted through the month of May, helping the Dollar to lift-up to the 95.00 level on DXY; but the past four months-plus have seen considerable grind take place around that same 95.00 level with bulls unable to sustain any lasting pushes above this area.

US Dollar Monthly Chart: Persistent Failure at 95.00 After April-May Bounce

In an event that rivaled yesterday’s Apple reveal for being leaked ahead of the presser, the European Central Bank brought few surprises at this morning’s ECB rate decision. The bank announced that they’re going to begin tapering bond purchases next month, set to finish entirely by the end of the year, while also slightly nudging growth forecasts lower.

The single currency largely held up through the rate decision and announcement of stimulus taper. It wasn’t until after the 8:30 press conference began, at which point we already had the US CPI data from August, that EUR/USD began to show notable movement. So, it would be difficult at this point to discern exactly whether Mr. Draghi brought much pressure to the bid in EUR/USD or whether that strength was coming from a weak US Dollar following that inflation release. At this point, however, it does appear as though the US CPI release has had a larger bearing on this morning’s EUR/USD price action.

Regardless of the exact driver, the pair is now fast approaching a key zone of resistance, an area that we’ve been following for much of the past month to demarcate whether or not the bearish trend has any value remaining. This area runs from 1.1709 (the 38.2% Fibonacci retracement of the 2017 up-trend in the pair) up to the late-July swing high at 1.1751, and this helped to hold the August swing highs as prices pushed back down towards 1.1500. But, as we’ve now seen on seven separate occasions since late-May, bulls came-in at support to defend the lows.

In a similar move, GBP/USD softened in the immediate aftermath of the Bank of England’s rate decision, which brought few changes or surprises. But, after that US CPI release, bulls came into bid and drove prices all the way up to a fresh six-week high in the pair.

GBP/USD price action is currently seeing a bit of resistance off of the 1.3117 level, which we looked at yesterday. This is the 38.2% retracement of the Brexit move, and this comes from the same study that helped to mark both the April high and the August low in the pair.

As we discussed yesterday, a topside test of this level makes the prospect of bullish continuation look a bit more attractive; and this can now open the door for higher-low support.