- This morning’s release of August Non-Farm Payrolls data saw a beat of the headline number as the actual print of +201k beat the expectation for 191,000 jobs to have been added last month. Perhaps more importantly, the Average Hourly Earnings portion of the report came in with strength, printing at an annualized 2.9% versus the 2.7% expectation. Given the Fed’s focus on wage growth, this could slightly tilt the odds higher for a December rate hike out of the Fed.

- The immediate response to this morning’s NFP report was USD strength. But, as we’ve seen numerous times over the past few weeks, bulls quickly lost motivation and prices began to soften again. If a market doesn’t move-higher on good news, something is ‘wrong’ in the backdrop, and this could preclude a bearish move in the longer-term theme around USD. Next week brings a plethora of US items, so it’s time for bulls to either show or go.

This morning’s Non-Farm Payrolls number reflected a healthy job market in the month of August as the US economy added 201,000 jobs during the month. This printed against an expectation of +193k, so we had a slight beat on the headline number. The unemployment rate printed at the same 3.9% as last month, but missed the 3.8% expectation; and the wage growth portion of the report remained strong with Average Hourly Earnings coming in at an annualized 2.9% versus the expectation for 2.7%.

The net response was one of US Dollar strength as the currency bounced back-above the 95.00 level. DXY was in a persistent slip leading into the report, as USD had slid back-below 95.00 around the European open. The big question now is whether this morning’s report gives USD bulls enough motivation to continue pushing higher on the chart, as the bullish move that defined the US Dollar’s Q2 price action remains in a state of hold as we approach the end of Q3.

Next week presents an open window for prevailing themes to show themselves, as we have high-impact data on the economic calendar out of China, Europe, the UK and the US. Chinese CPI is released on Sunday night, and given the volatility that’s started to show in global equities, this can be an important release to start off the week. Thursday, in particular, should be a busy day as we have the Bank of England for a rate decision at 7:00 AM ET followed by an ECB rate decision at 7:45 and accompanying press conference from Mario Draghi at 8:30. That 8:30 slot is also when we’ll see the release of US CPI for the month of August, so EUR/USD should be especially interesting around this print. And Friday brings two more pieces of high-impact data out of the US with the release of August Advance Retail Sales followed by U of Michigan Sentiment at 10:00 AM.

DailyFX Economic Calendar: A Busy but Diverse Data Outlay Ahead 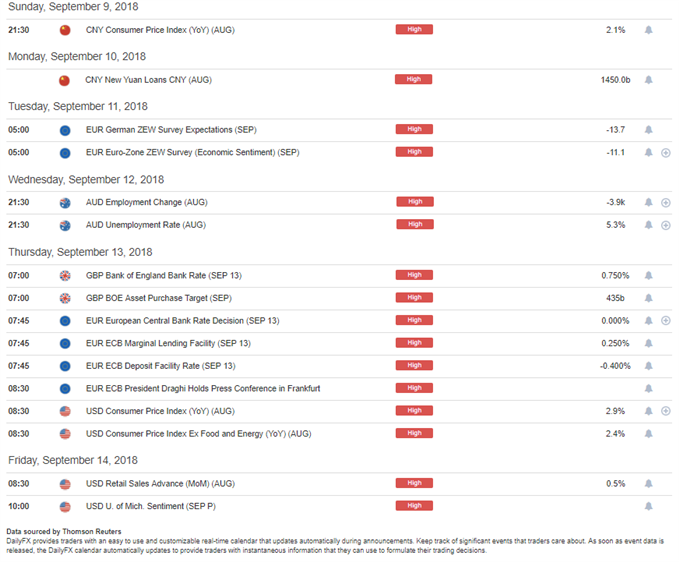 We looked into this in yesterday’s webinar, but the bullish run in the US Dollar has been in a state of hold for much of the past three months. While USD strength was very pronounced during the second half of April and the entirety of May, the currency hasn’t made much ground since setting a swing-high at 95.00 now more than three months ago. We did have bullish themes still showing as buyers were coming in at higher highs throughout the summer, but those same bulls appeared to lose motivation as we moved up to test fresh highs.

This played out quite vividly in the month of August. The first half of August was marked by a very strong US Dollar as EUR/USD dropped in response to the developing situation in Turkey. But the second half of the month saw an entire reversal of those gains, and we ended up pretty much where we had started. And this comes with a backdrop that should be supportive of USD gains, considering that the ECB appears far away from any near-term rate hikes while the Fed remains in the midst of a rising rate cycle.

US Dollar Monthly Price Chart: Struggling to Hold Above 95.00

So far in September, that bullish theme in the US Dollar has continued to lag, as we started off the week with a quick run up to resistance, after which sellers came back to push USD right back to that 95.00 level. After slipping below ahead of NFP, prices have popped-back above; and bulls maintaining the move here appears to be of the upmost importance as we have a positive driver coupled with bullish price action. A failure to continue the move would further put the prospect of longer-term USD strength into question, particularly if the currency fails to show a lasting response to a positive development.

Next week’s US data provides multiple opportunities for USD bulls to either show or go; and if we do see a continued failure around 95.53-95.75, the door may soon be opening to longer-term strategies of US Dollar weakness; alluding to the fact that the bullish theme that showed up in April of this year has been but a pullback in last year’s bearish trend in the US Dollar.

EUR/USD In Focus Ahead of ECB

Key to which direction DXY ultimately ends up taking on will likely be what happens with EUR/USD, as the pair accounts for more than 57% of the composition of DXY. Throughout this year, EUR/USD has provided significant drive to the Dollar, with the Greenback’s brightest showings coming at the cost of the Euro. This happened in late-April and again in May; and then in August the pop and drop in DXY mirrors the drop and pop in EUR/USD. This sets up both USD and the Euro for an interesting day next Thursday.

US Dollar Daily Price Chart (in Blue), EUR/USD (in red)

The big question is taper, and whether the ECB actually triggers the start of winding down their QE program. This was set forth at the June rate decision from the bank when the ECB alluded to the fact that they expected a reduction in bond purchases after September, with a complete wind down of the program expected before year-end. While nothing is certain here, it would likely be seen as a disappointment if this doesn’t happen, and that could bring on additional Euro weakness as the bank is seen as taking a more risk-averse posture to account for some of the recent developments. If we do get the start of QE-taper, the potential for Euro strength exists as the bank can be seen as making a key step towards eventual higher rates. And with the US nearing the neutral rate – this could keep the topside of EUR/USD as an item of interest.

At this stage, price action in EUR/USD remains bearish, and this can keep the door open for short-side approaches, as we looked at in this week’s FX Setups. But if we do see continued failure to put in a sustained break below 1.1500, then we may soon be looking at a re-emergence of the bullish theme that drove the pair for much of 2017. The area on the chart that we’re following for recognition of that theme runs from 1.1709-1.1750, and so far this has held the upward advance. But if/when this does get taken-out, the door soon re-opens for a continuation of EUR/USD strength.

GBP/USD In-Focus Ahead of BoE

Ahead of that Thursday morning ECB meeting, we get a rate decision out of the Bank of England. It’s unlikely that we’ll see any actual moves, and this meeting does not include updated projections nor will there be an accompanying press conference; for that we have to wait until November.

But the British Pound has been on the move of recent, and the big question at this point is whether the currency can stage any lasting move of strength after the August mid-month reversal.

We looked into the pair while remarking how messy near-term price action was. That fact remains, but given the topside push that has shown in the latter portion of this week, the possibility of bullish strategies remains, particularly if we can take out last week’s swing high ahead of next week’s BoE rate decision. We discussed potential around the approach on Wednesday of this week, and that outlook can remain as we move into next week.