US Dollar Opens at Support, EUR/USD Recovery In Focus

- The US Dollar has opened the week at the bottom of a support zone that had previously helped to shape resistance. Last week saw USD sellers take-over after the currency found resistance a little shy of the 97.00 level two weeks ago. With prices holding at support, will bulls take over to continue the trend that started in April? Or are we on the cusp of another wave of USD-weakness similar to what happened last year, when the Greenback fell by as much as 15% despite the fact that the Fed was the only major Central Bank actively looking to push hawkish policy?

- This week’s economic calendar has a wide outlay of events, with high-impact US data set to be delivered on Tuesday, Wednesday and Thursday mornings. Thursday and Friday bring some Euro risk with a couple of key releases there; but around the single currency, the bigger question will likely emanate from exposure to Turkey, as Turkish markets re-open this week after a week-long holiday last week.

US Dollar Opens at Support – Will Bulls Respond?

The US Dollar has opened this week at support, and this is the same area that held the lows through last week as well as earlier in the month. This is the psychological level of 95.00 that helps to shape the bottom of a zone that’s been in-play to varying degrees over the past few months.

The level of 95.00 came into play as the swing high in the month of May; and after breaking above in early-June, the area from 95.00 up to 95.53 helped to shape resistance for a little over two months. In mid-August, a bullish breakout showed as the Dollar traded up to fresh yearly highs, but buyers were unable to sustain the move and prices soon moved back to this key support zone. The price of 95.00 came back into play last Wednesday, and after a few tests there to close last week, that support remains as we open into a fresh week. The big question remains: Will bulls respond and push up to fresh highs? Or is the US Dollar on the cusp of a deeper bearish move that erases away the Q2 gains in the currency and reverts back to the previous bearish trend?

US Dollar Eight-Hour Price Chart: Opens at Prior August Support of 95.00

This week’s economic calendar has a wide-slate of high-impact releases; with high-impact US data set to be delivered on Tuesday, Wednesday and Thursday mornings. The Thursday print could be especially important, as this is the release of PCE for the month of July, which is the Fed’s preferred inflation gauge. Also populating the calendar later in the week are a few releases of European data that will keep the Euro in focus as the currency attempts to further recover from its earlier August sell-off. 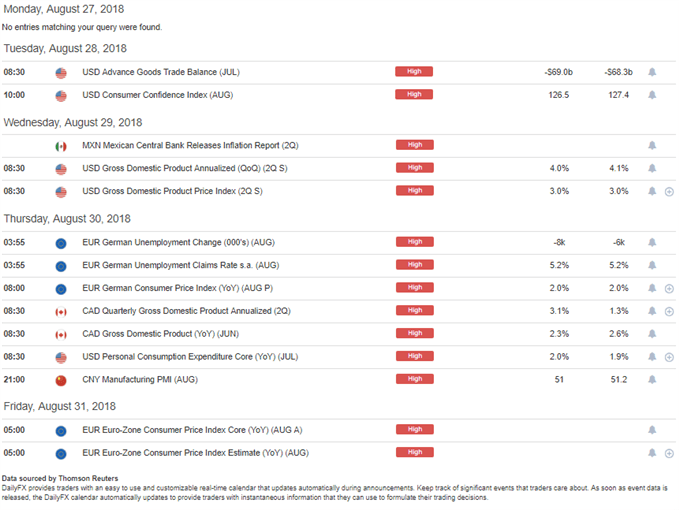 US Dollar Holds on to Bullish Trend But Carries Bearish Potential

The US currency has started to sputter after the pronounced bullish trend that began to show in Q2. But, going back to the visible drivers as the move was starting, it appeared as though that USD-strength was more resultant from Euro and Sterling weakness as each of those currencies were pushed-lower from April to June. While eroding inflation played a role in each of those bearish moves, it was largely external factors of fear that did the predominant portion of the pushing.

In Europe, the bearish move was first driven by volatility in Italian politics that remained ever-present through the month of May. And then earlier in August, fears around European bank exposure to the still-evolving situation in Turkey took over; helping EUR/USD to break-down to 1.1300. And in GBP/USD, the major fear has been Hard Brexit scenarios as Q2 made that situation even more opaque with a series of high-profile resignations from PM Theresa May’s cabinet.

While those fears remain in each market, last week saw traders take a step back from the proverbial ledge. But Turkish markets re-open this week after being on holiday for all of last week, so the potential for another leg of Euro-weakness on the back of that theme remains.

The US Dollar remains bullish as prices remain above the higher-low support that’s been recently established. But after last week’s downside move, a bearish formation has started to build that we look at below.

We looked at this in our FX Setups for the Week of August 27th, but the US Dollar formed a longer-term evening star formation last week, which will often be looked at for bearish reversals, indicating topping in a market. But – we avoided trading directly on the formation as prices remained above this key support area on the chart. If we do get a down-side break of support, we may be looking at a bigger-scale correction in the US Dollar that could bring back bearish themes in the currency, much as we saw through 2017 despite the Fed being the only major Central Bank actively looking to push a rising-rate environment.

The single currency was on the move as we opened into the month of August, soon breaking below a symmetrical wedge formation that had built over the prior two months. The big driver here appeared to be contagion fears as a number of banks in Spain carried exposure to banks in Turkey. As the economic situation devolved in Turkey, fears of European exposure to the situation pushed the Euro lower and prices continued to sell-off until the price of 1.1300 came into play. After a bit of support there, prices ticked-higher to close around 1.1450, and that strength continued into last week and price action is now back-above 1.1600.

This week sees Turkish markets re-open after a week-long holiday last week. Will sellers come back into the Euro to continue the down-trend, or have those fears completely dissipated to the point where prevailing trends and themes can take over again?

In EUR/USD, a big area appears to be around the 1.1750 level on the charts. There was a build of resistance here in late-July, just ahead of that bearish trend kicking-lower. If we do see bulls break back-above this area this week, that also means that we’ve probably seen a support break in USD, and the door could soon re-open to bigger-picture strategies Euro strength and US Dollar weakness. But like we looked at in our FX Setups for This Week, bearish strategies can remain attractive until that happens.

GBP/USD Digs Deeper into a Wedge

This is a similar theme as what we looked at above in EUR/USD, but bulls have simply had less push than with the Euro. This likely has to do with the nearing EU-UK Brexit negotiations and the fact that there are few bullish prognostications for GBP as we go into the event. Combine this with what’s been an extremely dovish BoE, and the prospect of continued strength becomes a bit more distant

At this point, GBP/USD had a similar support hit as EUR/USD a couple of weeks ago. But the topside move after the fact has been more moderate. In GBP/USD, the level of importance was 1.2671, as this is the 23.6% Fibonacci retracement of the ‘Brexit move’ in the pair. We looked at topside setups in the pair to start last week, largely on the basis of this support with a combined oversold backdrop in the currency. But after prices hit our second target, sellers came back on Thursday to push prices right back down, eliminating the morning star pattern that had started to show on the weekly chart.

This helps to keep the door open for bearish strategies in the pair, perhaps even to a greater degree than what we saw above in EUR/USD as bulls have been even more beset by sellers as prices have bounced from long-term support.