US Dollar Price Action, Euro Weakness In Focus for This Week

- The week opens with continued retracement in the US Dollar after last week’s fresh yearly highs, and this has helped to bring pullbacks of varying degrees to major pairs such as EUR/USD, GBP/USD and AUD/USD. We looked into each of these markets in our FX Setups for the Week of August 20, 2018.

- This week’s economic calendar is very light up front until we get to Wednesday’s release of FOMC meeting minutes. This leads into ECB meeting minutes on Thursday morning, and Thursday evening brings the release of July inflation numbers out of Japan. Friday marks the beginning of the annual Jackson Hole Economic Symposium in Wyoming.

US Dollar, Euro, Japanese Yen in Focus This Week

This week’s economic calendar, particularly the early portion is relatively quiet. We have no high-impact announcements on the docket until we get to Wednesday’s release of FOMC minutes from the August rate decision. Not much happened at that rate decision, so there aren’t many expectations for new information in the release of those minutes, but that leads into the release of ECB meeting minutes the following morning, and that’s followed by a release of Japanese CPI for the month of July.

Each of these Thursday items could be interesting, as Japanese CPI has come into focus after the earlier-year spike brought concerns that the BoJ may be soon nearing their own stimulus-taper; and around the ECB the big question is how the bank might handle another crisis flare and whether or not recent dynamics will derail their plans to start reducing bond purchases next month. The meeting minutes from that last rate decision in late-July may contain information regarding the bank’s posture should risks continue to rise around the Euro-Zone economy. The week closes strong with the start of the Jackson Hole Economic Symposium. 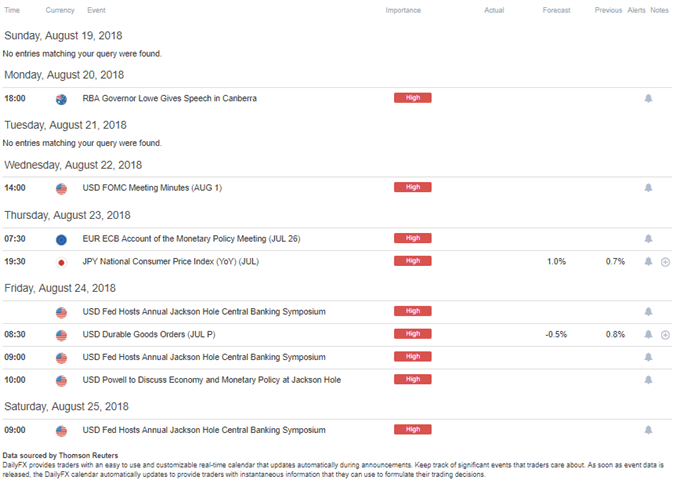 US Dollar Pulls Back from Fresh Yearly Highs

The big item from last week was the continued bullish breakout in the US Dollar. USD had closed the prior week after finding resistance at a big level of 96.47. This is the 23.6% Fibonacci retracement of the 2011-2017 major move, and the 50% marker from this same study had helped to set the low in DXY in February, far before bulls had come back to take control of USD price action.

That breakout ran for the first three days of last week, but started to pullback on Thursday and continued that move on Friday. As we open up a fresh week, short-term price action keeps the door open for a larger retracement, as indicated by the lower-lows and lower highs that have started to show on the hourly chart since Wednesday price action.

The big question is where long-term support might come into play. We had previously seen almost two months of resistance build in a zone that runs from the psychological level of 95.00 up to the June swing-high of 95.53. When the Dollar broke out two weeks ago, the topside move ran rather cleanly through this zone, and to date we haven’t yet seen the Daily or Four-Hour Charts check back for higher-low support. This could become an attractive area to look to in order to play pullbacks in the US Dollar’s bullish trend. Longer-term targets could be cast towards the 98.00 level on DXY, as we had looked at in our Q3 Technical Forecast on the US Dollar.

US Dollar Daily Price Chart: Support Potential at Prior Area of Key Resistance

EUR/USD Bounces Up to Initial Resistance

Matters have started fairly early for EUR/USD, as prices opened very near a key zone of resistance and have been moving-lower so far on the day. This zone of resistance was the first of three possible areas that we’re looking at for lower-highs in order to work with bearish continuation in the pair, and we looked at this setup as one of our FX Setups for The Week of August 20th, 2018.

EUR/USD found support at the 1.1300 handle last Wednesday, and a retracement has continued since and prices are now finding a bit of resistance at the 50% marker of the 2017 up-trend in the pair. A bit higher we have the 1.1509 level that helped to set the low in EUR/USD in both May and June and, as of yet, hasn’t been tested for lower-high resistance. And above that we have the prior swing high, which took place at a key zone of confluent resistance that we looked at earlier in August.

Coming into this week GBP/USD remains oversold on both Daily and Weekly charts, and a long-term Fibonacci level has just come into play. This is the 23.6% marker of the ‘Brexit move’ in the pair, and this is from the same study with which the 78.6% retracement helped to catch the top in April of this year.

While this collection of factors doesn’t necessarily portend a reversal of the negative flow that’s driven the pair lower over the past four months, it could produce an environment ripe for a retracement. We looked at the possibility of short-term up-side plays in the pair as part of our FX Setups for This Week, and this is largely on the basis of just how oversold the pair has become.

The two areas we looked at to sell from lower-high resistance last week can be repurposed for topside targets on retracement plays.

Of recent, we’ve seen those prior themes of Yen-weakness begin to quiet as markets gear-up for a potential move away from stimulus from the BoJ. To date, we’ve only seen initial signals of as such like the most recent BoJ meeting minutes combined with those reports that were circulating earlier in the month regarding previously discussed rate hikes.

Inflation spiked in Japan earlier in 2018, and in Q1 we saw the Yen strengthen considerably on the back of this drive. The prevailing thought being that rising inflation would push the BoJ into a corner similar to what was seen at the ECB last year, and as inflation continued to rise the Bank of Japan would be forced to act to first a) begin tapering stimulus and b) start adjusting rates.

We later found out that while this was happening, the BoJ planned as many as two rate hikes this year. They backed away from the idea as inflation softened again, and going along with that softness was a temporary return of Yen-weakness that lasted through Q2 and into the first part of Q3. But – as risk aversion has heated up of recent, so has Yen strength; and USD/JPY is moving back towards the vaulted 110.00 level of psychological support.

Thursday evening brings the release of July inflation numbers out of Japan. The past two months have seen headline inflation come in at .7% after a drop to .6% in April. This comes after the February spike up to 1.5%. 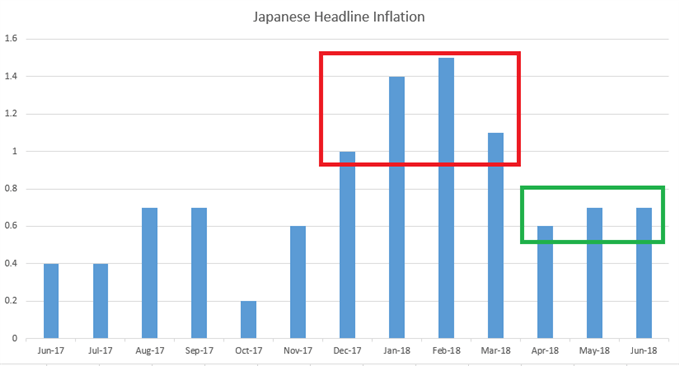 In USD/JPY, prices are in the process of wedging between two different trend-lines. Helping out with support is the descending trend-line taken from the January, 2017 top; and at resistance we have a shorter-term trend-line that can be found by connecting July and August, 2018 swing-highs.

AUD/USD Runs into Confluent Support, But Can it Shift the Tide?

A big support zone came into play in AUD/USD for the first time in a year-and-a-half. This is the confluent support zone around the price of .7200, as this zone had turned around two aggressive bearish advances in 2016, and hasn’t come into play ever since.

Wednesday saw prices test this zone for a few hours in the overnight session, but when bears were unable to push through, bulls began to take control and have been pushing higher ever since. We looked at this as one of our FX Setups for This Week, watching for prices to move up to the bearish trend-line that’s dominated the pair’s 2018 price action thus far.