- Tonalities of risk-aversion remain as we open up a fresh week, and the Euro has seen continued selling to start off the week by pushing down to a fresh yearly low. This theme is also showing in US equities as the Dow Jones and S&P 500 test support after last week’s pullbacks.

- This week’s calendar is rather light, with Euro-Zone GDP numbers on the docket for tomorrow followed by UK inflation on Wednesday serving as the highlights. Will either of these prints evoke enough of a pullback to open the door for themes of bearish continuation in the Euro and the British Pound?

The Euro is starting a fresh week by continuing the forceful fall from Friday, extending the downside run in EUR/USD to another new yearly low. The pair broke down last week as worries began to grip market participants around potential contagion in Euro banks from exposure to Turkey. Those worries have yet to recede and a risk-off feel continues to show across currency markets, with emerging market currencies being offered lower while safe-haven vehicles like the US Dollar or Japanese Yen remain bid.

This week’s economic calendar is rather light, so reversal drivers will probably not be emanating from FX data releases. The highlight of this week’s outlay is Euro-Zone GDP from Q2 set to be released tomorrow, and on Wednesday we get another UK inflation print. The big question around that inflation release is whether we finally see some element of calm develop around the British Pound after an aggressive sell-off over the past couple of weeks following the Bank of England’s earlier-month rate hike. 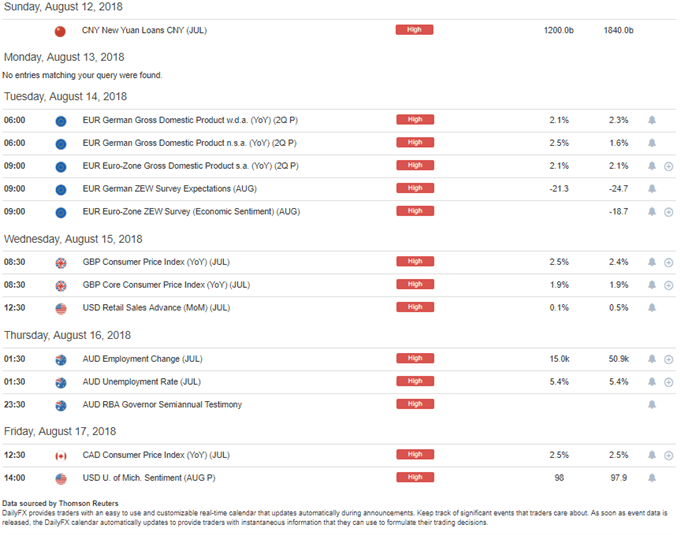 EUR/USD Down-Trend in the Spotlight

The big question around EUR/USD this week is whether we see extension in the pair’s down-side run. EUR/USD took a hit in Q2 on the back of a) a more dovish ECB and b) political risk beginning to show in Italy. But, the pair found support in mid-June and spent the next month-and-a-half building into a symmetrical wedge pattern.

Early August saw prices pose an initial break below this formation, and last Tuesday saw prices check back to find resistance on the under-side of that formation before prices broke down to fresh lows.

As we open this week, the prospect of continuation remains attractive: The primary complication being one of positioning on the chart as prices are fairly far away from any nearby points of resistance that can be used for stop placement or risk management. In our FX Setups for the Week, we looked at a few potential areas of interest for short-side continuation in this theme of EUR/USD weakness. Given the drivers on the calendar for tomorrow, this can be an opportune time to look for a pullback and a lower-high for those that want to look at short-side continuation without having to take on a 250 pip stop to get risk levels above the prior swing high.

The big question around Cable as we move into this week is whether we finally see some element of calm after what’s become an aggressive week-and-a-half of selling, and that aggressive sell-off comes on the heels of a larger sell-off that’s been hard to miss over the past few months. This is quite the change-of-pace in GBP/USD from where we were just a few months ago. As we came into April, the pair was flying high on the prospect of tighter policy out of the BoE, and that was largely in response to persistently strong inflation.

But, as inflation slowed, the BoE went dovish and prices began to collapse in mid-April. That sell-off continued into Q3 as worries around Brexit started to take-over; but the big point of capitulation appeared to take place around the Bank of England’s rate hike earlier in the month. This is when the BoE hiked while warning that one more might be on the way before 2020, and prices promptly fell as the Bank of England took on a more dovish tone than what was largely expected.

A Profound Change of Pace in the Pound: GBP/USD Daily Price Chart

This produces a backdrop somewhat similar to what was seen during the flash crash: A definitively dovish BoE is matched up with brute uncertainty on the Brexit front, and there is just very little reason for anyone to want to defend the bid in the British Pound.

That could, potentially, change a bit on Wednesday with the release of July inflation numbers, particularly if we see inflation beginning to tick up after a 2018 filled with drawdown. 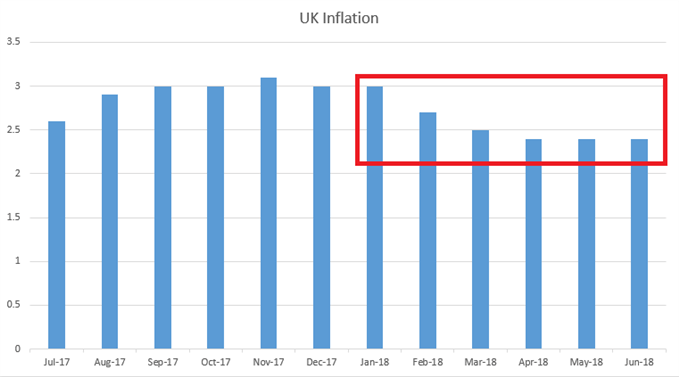 As we go into Wednesday’s inflation release, the big question is whether we can see pullback in the GBP/USD down-trend. Given how entrenched this theme has become, we’d likely need to see a really large surprise in this inflation print to bring about reversal, like a move back above 3%, and that’s incredibly unlikely. More operative, however, would be a quick blip of strength after shorts cover on the back of a better-than-expected print, at which point lower-high resistance can come into play for down-trend continuation.

Alternatively, traders can look for this theme of continued weakness in the British Pound against the Japanese Yen. We looked at this pair as part of our FX Setups of the Week, and the down-trend remains rather active there as the Japanese Yen has remained bid into a fresh week.

A risk-off feel continues to show around global markets as US equity indices remain near last week’s lows. The Dow Jones is in the process of testing an interesting support zone ahead of the US market open, but in FX-land the Japanese Yen remains bid.

USD/JPY dropped back-below a big trend-line projection and price action is putting in a short-term bounce above the 110.00 psychological level. This happens after falling below a key zone of support that runs from 110.63 up to 110.92, and this opens the door for short-term resistance at that zone of prior support. This also highlights how traders looking to sell Euros or British Pounds may be better served by looking to EUR/JPY and GBP/JPY as opposed to EUR/USD and GBP/USD, respectively. Because if this is going to turn into a larger risk-off theme, the Japanese Yen might have more to gain given our current backdrop combined with the rumors from last week that the BoJ may be soon nearing their own stimulus-taper.