US Dollar, EUR/USD Primed for a Heavy Week of FX Data

- It’s been a back-and-forth start to Q3 for many FX pairs, marked by continued ranges and digestion patterns showing in majors like EUR/USD. Last week’s ECB rate decision gave very little new information to work with, and this brings focus to tomorrow’s release of Euro-Zone Inflation figures.

A Heavy Slate of FX Data and Drivers Await

This week’s economic docket is full of drivers as we look to close out the first month of Q3. Later tonight (early Tuesday morning in Asia), we get the Bank of Japan’s July rate decision. Tomorrow brings a set of Euro-Zone inflation numbers that will likely garner even more attention after last week’s uneventful ECB rate decision/press conference. Wednesday brings the Federal Reserve’s August rate decision, and then Thursday morning brings a Bank of England ‘Super Thursday’ rate meeting that continues to carry a strong chance of getting a rate hike. The week closes with Non-Farm Payrolls on Friday morning, making for a rather brisk outlay of high impact data set to be released throughout this week.

DailyFX Economic Calendar: A Full Week of Data and Drivers 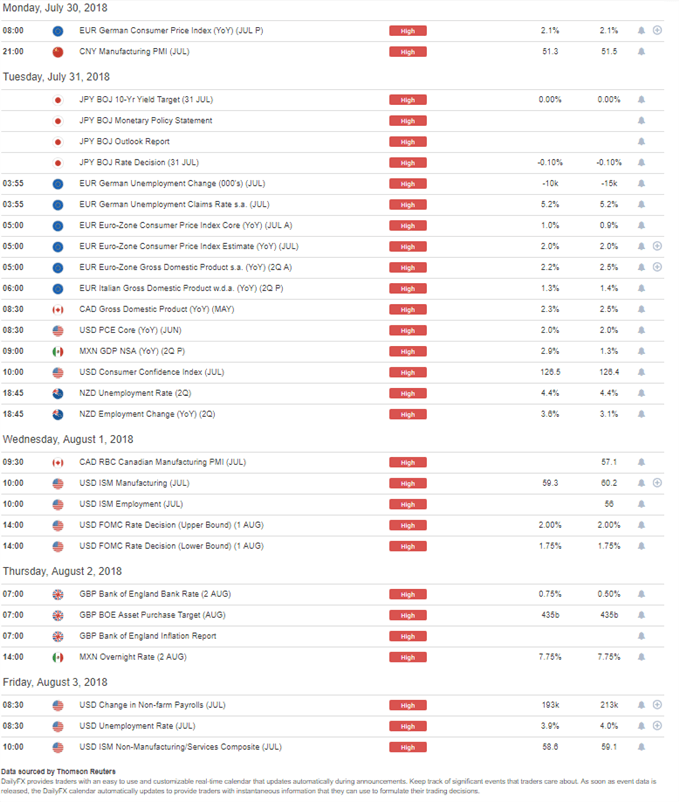 US Dollar Q3 Digestion Continues, Focus on EUR/USD For a Directional Break

So far the US Dollar has been lacking for direction in Q3, and this comes after a strong bullish move that showed quite visibly in Q2, helping to break a down-trend that had been previously driving-lower for more than a full year.

US Dollar via ‘DXY’: Q3 Price Action (in Grey) Marked by a Lack of Directional Trend

Given the divergent policies from the representative Central Banks, the prospect of USD-strength appears sound. The Fed is looking at another five rate hikes going out to the end of next year, while the ECB might be looking at one. But this isn’t necessarily all too different from what we had last year, when the Fed was basically the only major Central Bank looking to actively tighten policy and hike rates; yet the US Dollar still continued to lose ground as the currency dropped by as much as 15% in 2017.

This highlights the importance of forward-looking rate expectations. Optimism around the ECB shifting to a more-hawkish stance had helped to drive Euro strength last year – and deductively that helped to bring on US Dollar weakness, particularly in DXY where the single currency has more than a 57% representation of the Dollar index. That Euro strength largely remained until April of this year, when the ECB sounded very dovish after a dip in European inflation data. This led to the dovish ECB announcement in June in which the bank announced stimulus taper but also said that they were anticipating keeping rates at current levels ‘at least through the summer of 2019.’

Since that rate decision, however, we saw another strong print in Euro-Zone inflation as Euro-Zone CPI grew at 2% in the month of June. This is right at the ECB’s target, and this comes on the heels of a jump up to 1.9% in the month of May. The next data point for this series is set to be released tomorrow, and if we do see continued growth, Euro strength may soon be on the return, and this could finally lead to a break of support in the US Dollar.

Regarding support in the US Dollar: Last week saw prices test below the key zone that runs from 94.20-94.30, with buyers soon returning upon a test of the bullish trend-line connecting the June and July swing-lows. If we do see this trend-line taken out this week, deeper support exists around that June swing low in the approximate range of 93.20-93.30; and if that doesn’t hold, the next area of interest would be around the 92.00 handle on DXY.

Last week’s ECB meeting brought little by way of new information, with the ECB making only slight modifications from their previous rate statement that was released in June. This puts the focus further onto the data in the effort of reading whether the ECB may be forced to look at rate hikes sooner than the current low-bar Q4, 2019. European inflation will likely be a key determinant to this drive, and as we see below, this data point has been on an encouraging trend of recent after last year’s slumber below 1.5%.

Euro-Zone Inflation Returns to 2% in June 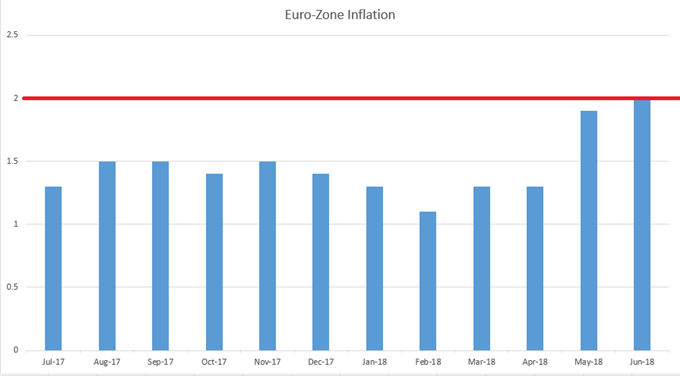 In EUR/USD, last quarter’s down-trend met its match at 1.1509, which helped to form the swing low in both May and June of this year. Since that most recent failure to trade through 1.1500, price action has built into a symmetrical wedge formation, indicative of digestion after a big move such as we saw in Q2.

USD/JPY Attempts to Carve-Out Higher-Low Ahead of BoJ

Later tonight brings a Bank of Japan rate decision to markets, and of recent there have been thoughts that the bank may be nearing their own announcement of stimulus-taper before too long.

While the Yen started Q2 with a consistent string of losses, that weakness reversed two weeks ago around the comments from President Trump regarding interest rate policy. Shortly after those comments, rumors began to circulate about the BoJ potentially pulling back on stimulus, and this has helped to keep the pair’s prices pinned around the 111.00-handle. This pullback shows at an interesting area, as we have both a prior trend-line projection as well as a prior batch of swing highs from June and July helping to hold the lows.

We looked at a bullish setup in USD/JPY as part of our FX Setups for This Week.

GBP/USD Met by Dueling Forces Ahead of BoE ‘Super Thursday’

There are strong probabilities for a rate hike out of the BoE this Thursday. But as we’ve seen around the British Pound in the recent past, Brexit risk continues to restrain the topside potential in the pair. The big question is whether this rate hike will be anything more than a one-and-done, if we get one at all; and the UK’s showdown with the EU in a few short months around Brexit negotiations can continue to act as a hindrance to bullish themes in GBP.

We looked at a bullish setup in Cable last week largely on the basis of just how oversold the pair had become. After a failed attempt to trade through 1.3000, prices budged-higher and continued to retrace up to the 1.3200 handle. At this stage, we’re set up right around the 38.2% retracement of the ‘Brexit move’ in the pair at 1.3117, and gleaning a directional bias here on shorter-term charts could be of a challenge. The bigger-picture down-trend remains, but we’re still rather far away from nearby resistance, making the prospect of short-side positions ahead of the BoE as somewhat of an unattractive prospect.