- The US Dollar’s bullish trend is coming into question after a rather aggressive reversal has shown from yesterday’s fresh yearly highs. At this stage, the move would be considered a pullback given that we remain above recently established support. But that could soon change, and next week’s calendar brings an ECB rate decision that could drive that change, along with a litany of corporate earnings reports from US-based companies.

- The driver for this pullback was a series of comments from President Donald Trump concerning FOMC rate policy, despite the fact that rate policy is clearly controlled by the Fed and this was even acknowledged by President Trump in his responses yesterday when he said, “I’m letting them (the FOMC) do what they feel is best.” Nonetheless, markets have continued to push the Dollar-lower after the earlier week ramp, and this keeps USD in-focus as we move towards next week.

US Dollar Pulls Back Shortly After Setting Fresh Yearly Highs

The US Dollar is lower on the morning, continuing the pullback that started yesterday afternoon after a series of comments from President Trump made their way through markets. President Trump opined that he wasn’t a fan of the Fed’s persistent hawkishness, noting how it could, potentially, offset or perhaps even derail his economic initiatives. In a sign of how closely markets are following the US President, a near-immediate pullback in the Dollar began to show and in short order DXY has perched back towards earlier-week support from the Fibonacci level at 94.30 just hours after having set a fresh yearly high. Given the momentum of this recent bearish move, and also taken with the ECB rate decision on next week’s economic calendar, and this pullback could soon move into reversal status should we see breaches of July and then June swing support at 93.71 and 93.20, respectively. 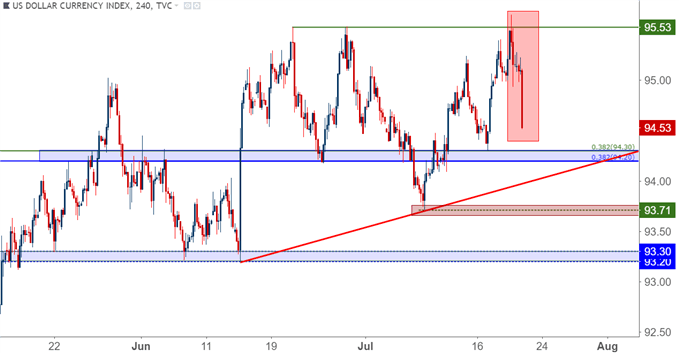 As we move into next week, focus begins to shift back to the Euro. The European Central Bank’s rate decision scheduled for next Thursday is the highlight of next week’s FX calendar, and this is the first ECB meeting since last month’s announcement of stimulus-taper. Also circulating around the Euro-Zone is the potential for another rise in Italian political tensions, as outlined by our own Justin McQueen earlier this morning. Outside of FX, US corporates continue reporting earnings for Q2, and expectations are very high for continued outperformance. 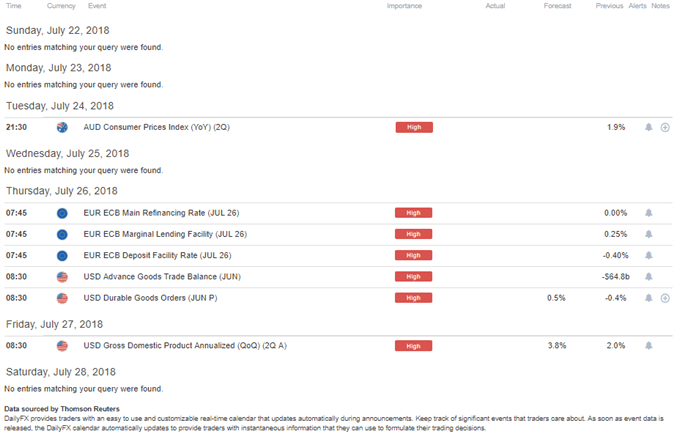 Did the US Dollar Just Top on Trump’s Comments?

The big question as we move into next week is circled around whether the bullish trend in the US Dollar can continue or whether we’ll see a reversal after President Trump’s comments. The full quote from President Trump may offer some clarity there, as he said: “Because we go up and every time you go up they want to raise rates again. I don’t really – I am not happy about it. But at the same time I’m letting them do what they feel is best.”

The second part of that statement appears pretty important, as the initial implication was that President Trump may try to stop or stall or even slow the Fed’s rate hike plans; while the addition of the second part of that statement highlights zero motive for pushing the bank in one direction or the other. This also begs the question as to whether yesterday’s reversal might have larger potential to bring on a deeper sell-off, and if we do see a larger pullback here, the same zone that helped to bring on support earlier in the week around 94.30 could be re-utilized as we move deeper into Q3. 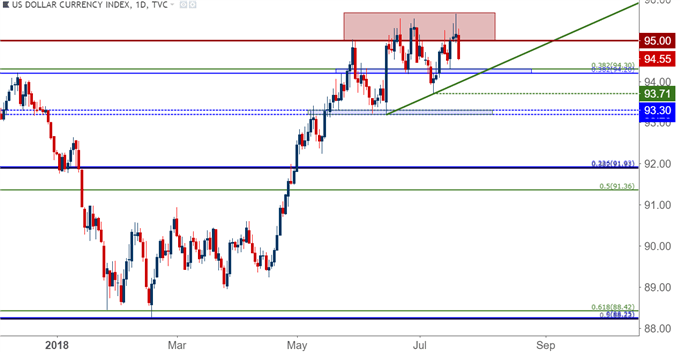 EUR/USD Weakness at Bay Ahead of ECB

The ECB delivered the motivation that Euro bears needed to extend the bearish run in the pair at their last rate decision; and sure enough, bears did take over after last month’s announcement. But, once prices got down to the prior month’s low, that bearish drive stalled; and then a week later, started to go into reversal as price action popped back-above the resistance zone of 1.1685-1.1736. Once we traded into Q3, sellers came back to push prices back below this area but, to date, we haven’t yet tested below the May swing-low in the pair.

The big question is whether next week’s ECB meeting gives sellers the motivation to push the pair below 1.1500 for the first time in a year, and the ability to do so will likely be a key determinant as to whether or not the US Dollar is able to re-ascend to yesterday’s fresh one year high.

Also pertinent and definitely worth keeping an eye on: The possibility of another flair of risk permeating European sovereign debt markets. Going along with the May swoon in Italian assets was a quick increase in Italian bond yields. This wasn’t quite to the tune of what was seen back in 2012, but this is something that could soon be of concern if the situation that we saw in May around Italian politics amplifies. Our own Martin Essex looked into this earlier this morning in his piece, Eurozone Debt Crisis: How to Trade Future Disasters.

EUR/USD Four-Hour Price Chart: Bears Unable to Yet Encroach Upon 1.1500 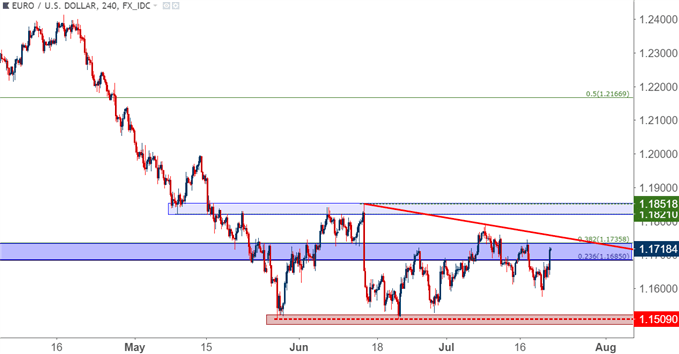 USD/JPY Pulls Back to Support – Will the Bullish Trend Continue?

Probably the most noteworthy FX event so far in Q3 has been the bullish breakout in USD/JPY. After spending Q1 in a nasty slump, and recovering a bit in Q2, turning the page into July brought bulls back into the fray as Yen-weakness became one of the more workable themes available to FX traders. USD/JPY broke out last week and that theme of strength continued into yesterday when the pair tested above the 113.00 level again.

But as the USD pullback has gained speed, so has the pullback in USD/JPY, and this may be soon opening the door for bullish continuation strategies in the pair. Potential higher-low support could be sought out around the area taken from those prior highs that runs from around 111.30-111.50. This could open the door for stops below the July swing-low around 110.25 while looking for prices to recover back towards 2018 highs. 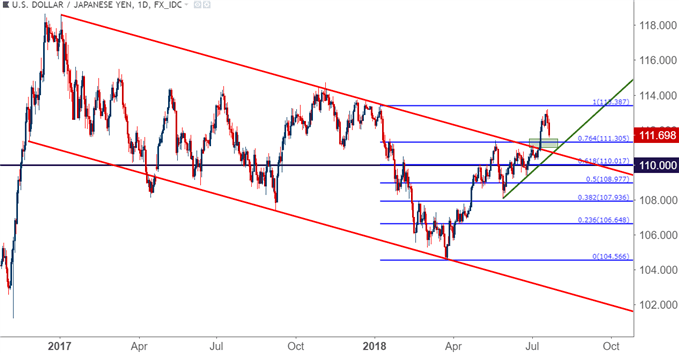 For those that do want to look at bullish plays in the Euro next week around that ECB rate decision, EUR/JPY could be considered more attractive than the major pair of EUR/USD. While US Dollar strength has helped to hold EUR/USD below resistance, a far different theme has shown in EUR/JPY considering that pronounced case of Yen-weakness so far in Q3. We looked into the pair yesterday, seeking out possible areas to look for higher-low support. The first of those areas has helped to hold the lows over the past day, but a bit deeper is another area of interest from the 130.00 psychological level up to the June swing highs. 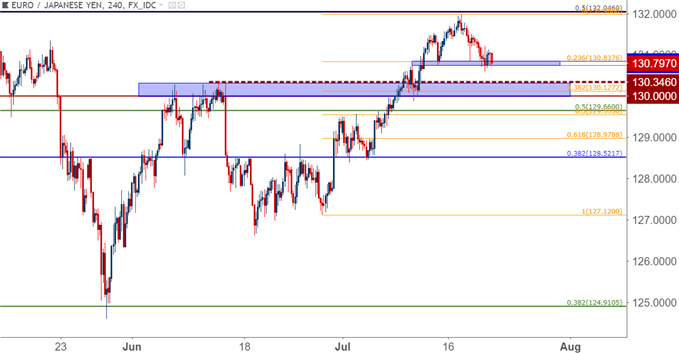 Also with this morning’s USD weakness we have a bit of CAD strength after a really strong CPI report. Canadian inflation came in at 2.5% for the month of June, well-above the 2.3% expectation. In response to the dueling dynamics in the US and Canadian Dollars, USD/CAD is pulling back to a trend-line that’s helped to define the bullish trend of the past three months. This also puts price very near the two most recent swing-lows, and this can keep the door open for bullish continuation in the US Dollar should this support structure remain respected. 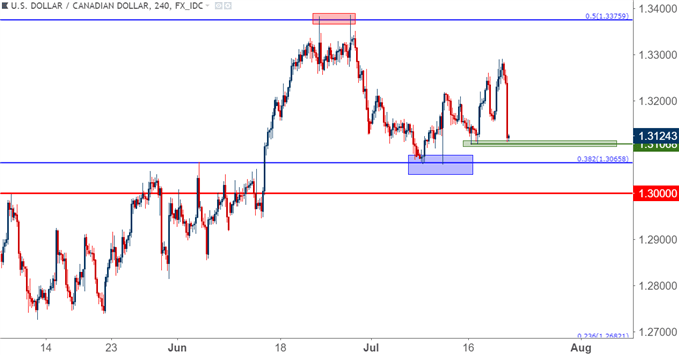 US Stocks, S&P 500, Dow Jones Pull Back to Support

As we move into Q3 earnings season markets have a number of themes to wrestle with. Trade wars continue to populate the headline but, to date, haven’t shown a dramatic impact on equity prices. US stocks started Q3 with a bang, showing bullish breakouts across a number of indices, and those themes of strength have started to pull back over the past couple of days.

In the S&P 500, we’re testing an area of potential support that comes from resistance taken from the March and June swing-highs; and this area also runs from the 76.4-78.6% Fibonacci retracements taken from the February sell-off. If support doesn’t hold around this zone, traders would likely want to look for a pullback towards the 2750 area. 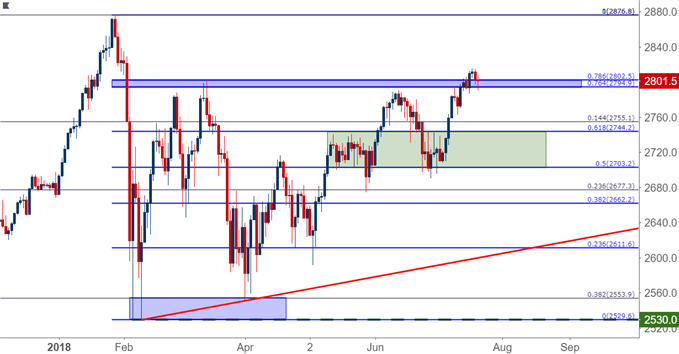 We looked into the Dow Jones yesterday as the index treaded above the 25,000 level. Prices are now testing the 23.6% Fibonacci retracement of the April-June move and this is an area that we’ve looked to for potential higher-low support on a couple of different occasions. A bit deeper we could also see support potential around the 24,787 area as taken from a group of prior swing highs and lows; and if that can’t hold, the 38.2% retracement of the April-June move becomes attractive for support around 24,624. 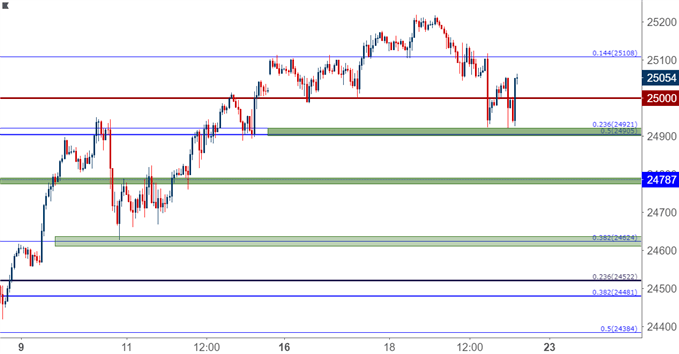