- US Dollar strength has continued and the currency has traded up to fresh one-year highs, testing above the 95.53 resistance swing that had showed up last month. This continues what has become a rather pronounced rally in the Greenback after the earlier-week test of support, and this keeps the door open for bullish continuation as we move deeper into the year.

- This continuation of USD strength has come along with bearish pushes in both GBP/USD and EUR/USD, each of which carries varying degrees of continuation potential. In GBP/USD, traders would likely want to observe oversold conditions as Daily RSI has been showing divergence for some time now, and the pair is testing a key psychological level. Meanwhile in EUR/USD, we have an ECB meeting on the calendar for next week and the pair is approaching a key area of support around the 1.1500 level; of which a break-through can open the door for bearish breakout strategies.

US Dollar to Fresh One-Year Highs

The US Dollar’s bullish bounce from support took a short break yesterday around Jerome Powell’s second day of testimony; and after a pull back to the 95.00 level on DXY, prices have re-ascended and are heading directly for the June swing high. That June swing high at 95.53 saw two separate failures at this level, first on June 21st and again a week later. We’re now nearing this level for another test, and the big question is whether bulls will be able to keep pushing; or whether we’ll walk away with a third failed attempt at taking out the 95.53 level. 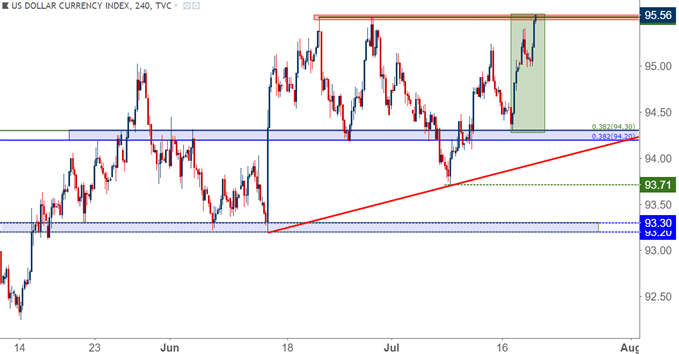 These are the same levels we shared as targets for the currency in our Q3 technical forecast on the US Dollar, and that full report is available directly from the following link: US Dollar Q3 Forecast, DailyFX Trading Guides. 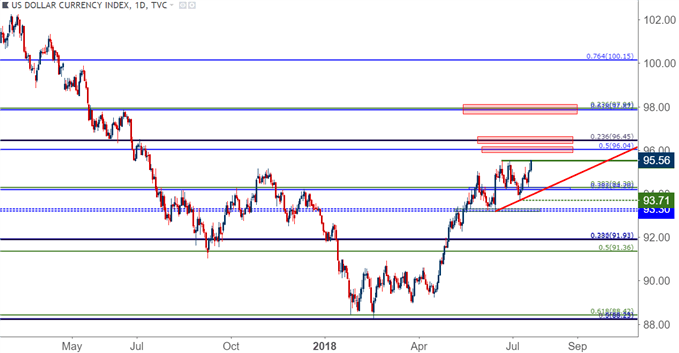 The sell-off in the British Pound is continuing into this morning, and GBP/USD is now testing below the 1.3000 level for the first time in ten months. This comes after two days of negative data: Yesterday’s disappointing inflation report was followed by this morning’s disappointing retail sales, both of which have helped to give bears a bit more running room. Each of these data points make the prospect of a rate hike from the BoE in a couple of weeks seem less-likely, and if we do see an actual rate rise out of the bank this year, November may be more likely as we should have a greater deal of clarity on the Brexit-front.

At this point the one potentially positive driver behind the currency, the potential for a rate hike out of the BoE, is coming into question and that’s helping bears push prices below support. But – we may be nearing a point where the currency is so oversold that bearish strategies might want to take a step back to wait for a cleaner setup. We’ve seen RSI diverge on the daily chart over the past couple of months and this highlights just how oversold this trend has become. And while oversold doesn’t preclude the possibility of further losses, it does set the bar a bit higher for short-side strategies. Traders looking to work with bearish continuation will likely want to wait for a pullback to potential resistance, and areas such as 1.3050 or even 1.3117 could be usable for such a purpose. 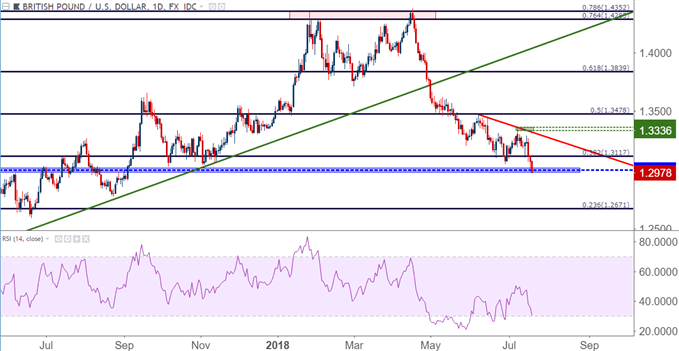 EUR/USD bears have re-gained control in the pair after an initial move of strength to open Q3, and prices are now trading at fresh July lows after a continuation of yesterday’s downside run. Price action is making a move towards the support swing that showed in May and June around 1.1509, just a bit above the 1.1500 psychological level.

At the core of the move is the dovish posture around the ECB that caught another gust of motivation around the bank’s June meeting. That will come further into view next week as the European Central Bank hosts their July rate decision, set to be announced next Thursday morning (July 26th, 2018). If the ECB is able to show a continued dovish stance even despite the fact that inflation is running very near the bank’s goal of 2%, the stage could be set for a showdown at this low along with the potential for a deeper bearish breakdown. 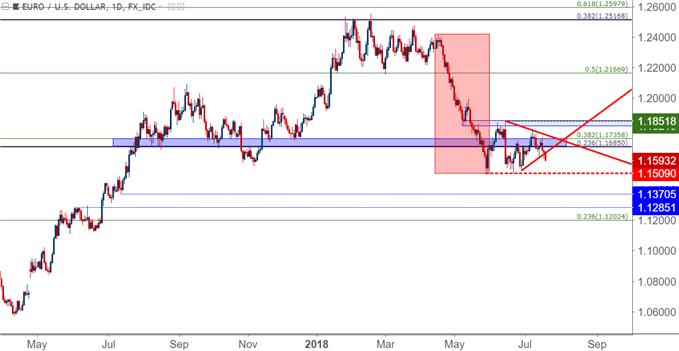