- So far Q3 has brought quite the change-of-pace in US Dollar price action, and the Greenback is continuing to slide after falling below a key area of support on Friday following Non-Farm Payrolls. With a highly-pertinent inflation print on the calendar for this Thursday, expect the US Dollar to stay in-focus as the prospect of a further EUR/USD recovery hangs in the balance.

- In this week’s FX Setups, we looked at short-USD exposure against both the Euro and the Swiss Franc, but the other side of the Greenback has an interesting setup in USD/CAD. The Bank of Canada hosts a rate decision on Wednesday, and USD/CAD is testing a confluent area of support as we open this week’s price action.

- DailyFX Forecasts have been updated for Q3 and are available on a variety of currencies such as the US Dollar or the Euro. These can be accessed from the DailyFX Trading Guides page. If you’re looking to improve your trading approach, check out Traits of Successful Traders. And if you’re looking for an introductory primer to the Forex market, check out our New to FX Guide.

The US Dollar’s Q3 Slide Continues

The Q3 sell-off in the US Dollar is extending into a second week, and DXY is sliding further-below the support zone that we were following last week. Going along with this move of weakness in the US Dollar has been a continuation of the strength in equities that showed after Friday’s release of Non-Farm Payrolls from the month of June. Both the S&P 500 and the Dow Jones Industrial Average are trading at two-week highs ahead of this morning’s US market open, and this is setting the stage for what could be an interesting week across FX markets.

This week’s economic calendar has a couple of speeches from Mario Draghi (Monday and Wednesday morning) along with an appearance from BoE Governor, Mr. Mark Carney. The Bank of Canada hosts a rate decision on Wednesday, and Thursday brings US CPI data for the month of June, fresh on the heels of a six-year high that printed for the month of May. This puts all of the Euro, the British Pound, and both Canadian and US Dollars in focus for this week as we move deeper into the second-half of the year.

DailyFX Economic Calendar: High-Impact Events for the Week of July 9, 2018 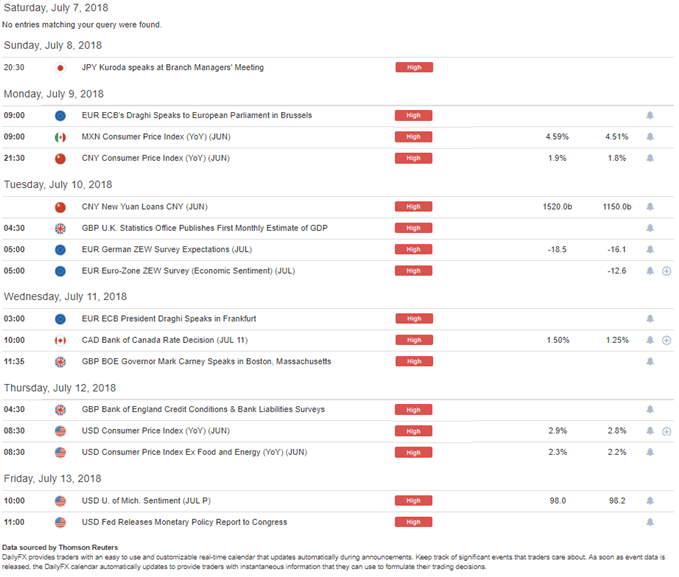 US CPI in Focus

Last Friday’s NFP report was not bad. The headline number beat, but both the unemployment rate and Average Hourly Earnings came-in below expectations, so the takeaway was a mixed bag as there were both positives and negatives to take away. But the market response was not so balanced, as we saw the net impact of Dollar-weakness and equity strength, and this played out across the FX-spectrum with EUR/USD and GBP/USD both gaining; perhaps highlighting the ‘push point’ for the Greenback at the moment, which appears to be signs of inflationary pressure.

This puts focus on the CPI print set to be released on Thursday morning. Last month saw CPI print at one-year highs of 2.8%, which is the highest level since February of 2012. This stronger show in inflation is what helped the Fed to take a hawkish outlook into that last rate hike in June.

The expectation for Thursdays print is for another six-year high of 2.9%. But – if we do see this disappoint, the pullback in the US Dollar could deepened and this could bring additional strength into US stocks. 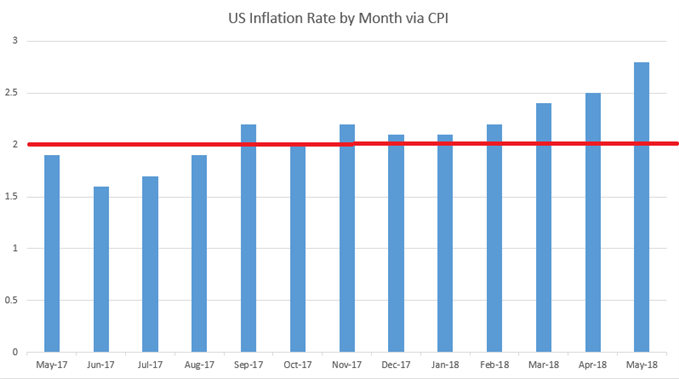 US Stocks at Two-Week Highs

Last week produced digestion in a number of US equity indices to start Q3, and we’d looked at prices narrowing in the Dow Jones on Friday morning ahead of NFP. But – that Non-Farm Payrolls report helped to bring the bulls back into the fray, and prices in all of the Nasdaq 100, the S&P 500 and the Dow Jones Industrial Average are trading at fresh two-week highs with the prospect of more.

In the Dow, prices have broken above a key zone of prior support/resistance that runs from 24,384-24,522, and this can open the door to bullish continuation strategies as we move deeper into this week. Traders can look for higher-low support at a few different areas of prior swing resistance, as we look at below.

Last week saw a key support zone come into play in the US Dollar, and the net-impact of Friday’s Non-Farm Payrolls report was USD dropping through that zone. We’re now back-below the 94-level on DXY for the first time since the ECB rate decision in June, and this opens the door for a deeper zone of potential support, and this is the same area that had helped to cauterize the lows ahead of that ECB rate decision, just on the heels of the Fed’s rate hike last month. This zone runs from 93.20-93.30, and until that comes into play, it could be difficult to make a bullish prognostication on the Greenback unless something changes in the near-term.

Q2 was a bad quarter for the Euro, and this was a very visible fact as witnessed by the currency’s 1,000-pip-plus drop from mid-April into late-May. But this was the first bad quarter for the currency in over a year, and the timing of the ECB’s dovish twist to stimulus exit appears to have come at an inopportune time as European inflation is also moving-higher. In June, just a couple of weeks after that ECB rate decision, Euro-Zone CPI came in at the ECB’s target of 2%. And while this may not necessarily beget immediate rate hikes out of the ECB, it does thicken the plot if the bank intends to stick to current rates ‘at least through the summer of 2019.’

The net response since that June inflation print has been one of strength in the single currency. We looked at a bullish setup in EUR/USD in our FX Setups for this Week, largely looking to play on a continuation of this theme. At this point, prices are making a fast-charge towards the June swing-highs that run from 1.1821-1.855; if we do see a test of resistance here, the door can be opened to buy higher-low support, looking for the move to continue up to fresh monthly highs.

This weekend brought a summit for Theresa May and her cabinet in order to hash-out details on the UK government’s approach in ongoing Brexit discussions. The ‘soft Brexit’ plan has been heralded as GBP-positive, as it appears to be the way forward for the UK. Later this week, we’re expecting an official government white paper at which point Brussels will begin to analyze the proposal. The thought is that the current proposal is EU-friendly, as it establishes a UK-EU free trade area with the UK implementing identical rules and regulations for certain sectors, as the EU has established.

This, of course, wasn’t without political volatility, and we may not have seen this entirely play out just yet. Brexit minister David Davies resigned on news of the deal, and likely we’re going to see the UK government challenged to complete a deal ahead of the October EU meeting.

The initial response in the Pound was a gap-higher at the open that quickly filled-in over the following couple of hours. Since then, US Dollar weakness has taken over, and GBP/USD has budged above the resistance area that we were looking at last week. This can open the door to bullish strategies in the pair as traders look to buy higher-lows in anticipation of a move towards 1.3450 followed by a move back-to the vaulted 1.3500 psychological level.