US Dollar Drops to Support as EUR/USD Strength Shows: NFP on Deck

- The US Dollar continues its Q3 pullback, and a key zone of near-term support has come into play in the area that we’ve been following that runs from 94.20-94.30 on DXY. There’s a deeper area of support that can keep bullish strategies in play, and this runs a bit deeper in the range that shows from 93.20-93.30. A break below that area gives us fresh seven-week lows, and this would make the prospect of bearish continuation look considerably more likely. As of now, the pullback in USD is a short-term pullback in a longer-term bullish trend, but with NFP on the radar for tomorrow, that can begin to change quickly.

- Contributing to that drop in USD is continued strength in both EUR/USD and GBP/USD. We looked at the prospect of bullish reversals in EUR/USD in Tuesday’s webinar, drawing comparison to last year’s price action around the October ECB rate decision. This is when the bank extended stimulus into 2018, helping EUR/USD break below a key support zone (that’s currently showing as near-term resistance). But that weakness was short-lived, as a red-hot German GDP report released just a couple of weeks later brought Euro bulls back to the party. With European data looking stronger, and June inflation printing at the ECB’s target of 2%, might we be looking at a redux of the same theme?

It’s been a retracement-type of start to Q3 across FX markets, led in large-part by a continued drop in the US Dollar after last quarter’s aggressive flare of strength. Despite the fact that yesterday was a holiday in the States, the US Dollar continued its descent, and that bearish drive is still showing as we open up Thursday trade in the US. At this point, the US Dollar is testing the support zone that we’ve been following that runs from 94.20-94.30, and this is the same area that had helped to hold the lows in the latter-days of Q2, helping to produce another test of 11-month highs before this retracement began. Can this zone hold up a second test of support? NFP is on the economic calendar for tomorrow, and we can certainly see prices move in a hurry, particularly given the number of related themes that are showing in pairs such as EUR/USD or GBP/USD.

If the Dollar does not hold this support zone, that does not mean the towel is necessarily thrown-in on the prospect of bullish continuation. A bit lower on the chart is another area of potential support that’s seen quite a few more tests, helping to hold swing lows in both May and June of last year. This area runs from 93.20-93.30; and if the Dollar falls below this zone, the bullish picture for USD would be significantly more difficult to justify as we’d be trading at fresh seven-week lows.

EUR/USD With Reversal Potential as Key Resistance Faces Another Test

One of the contributing factors to this deeper pullback in the US Dollar is a show of strength in the Euro. EUR/USD has moved right back to that key resistance zone that we’ve been following that runs from 1.1685-1.1736, and prices are continuing to hold here. But – gains so far this quarter have been brisk, and we’ve started to see the fundamental backdrop shift a bit as strong European data has helped to push rate hike expectations a bit.

EUR/USD Daily Chart: Back into Key Zone of Resistance/Prior Support

We discussed this theme in Tuesday’s webinar, drawing comparison to what happened to the Euro in Q4 of last year. As we walked into the ECB’s October rate decision, hopes were high that we’d finally get some announcement around stimulus exit. The implication was that a move away from stimulus would then bring on rate hikes and further policy normalization, and this premise of possible rate hikes kept the bid behind the Euro for much of last year. But – when the ECB extended stimulus into 2018 at that October, 2017 rate decision, the justification for that bid fell, and so did the single currency. This is when EUR/USD drove below our key support zone, and this theme held for a couple of weeks.

What changed that was a red-hot German GDP report that was released in May. In a hurry, rate hike bets re-built around the Euro-Zone, and this brought the bid back into EUR/USD. Within a few months, we’d catapulted up to the 1.2500 area.

But something very similar happened in April and then again in June. In April, the ECB went dovish after European data had shown some weaknesses, and this helped the pair to break-lower. That bearish move hastened in May as political pressure heated up in the Euro-Zone. But, as we came into June, rumors began to circulate that the ECB might actually announce a plan for stimulus exit. Much as we’d seen throughout 2017, buyers pushed the Euro higher in anticipation that an announcement of stimulus exit would be coupled with or shortly followed by rate hikes.

EUR/USD climbed back above this support zone, and this area held as support as we walked into the June rate decision from the ECB. But – what happened here was very similar to what happened in October of last year, as a dovish ECB removed the justification for the bid behind the single currency, this time by saying that stimulus exit would not be connected to near-term rate hikes, and once again prices fell below this key zone of support.

EUR/USD Four-Hour Chart: Throttles Below Support After June ECB, But Sellers Unable to Take Out the Low

On Tuesday, we looked at the prospect of European data coming-in above expectations and pushing rate hike bets in the Euro-Zone, again very similar to what happened in Q4 of last year. Euro-Zone inflation came in at 2% in June, and this is on the heels of a 1.9% print in May. Continued strength in inflation may push the ECB’s rate hike plans forward, and this could continue to elicit buyers in the single currency under the premise that the ECB may need to get a bit more-hawkish on the rate hike front to account for improvement in underlying fundamentals. 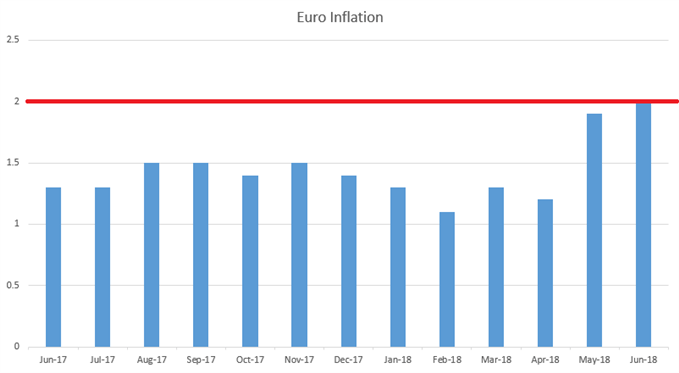 To work with this possible theme of EUR/USD strength, traders would likely want to allow for prices to re-engage above this key zone of support/resistance. This area also runs very close to a bearish trend-line taken from the mid-May and mid-June swing highs. A break above this zone could re-open the door for long exposure, and the current zone of resistance could be re-utilized as potential higher-low support for continued reversals.

In the UK, Brexit remains as a hurdle and the headlines of recent have not been friendly to GBP bulls. But, similar to what we’ve seen in EUR/USD, an aggressive down-trend that lasted for most of Q2 has come into question as prices continue to retrace in Q3. We’d looked into the pair earlier this morning in the article, GBP/USD: Cable Breaks Above Trend-Line After Hawkish Carney Comments. Prices in the pair closed Q2 with a hold of a key support level, the 38.2% retracement of the Brexit move at 1.3117.

GBP/USD Weekly Chart: Three Weeks of Support at the 38.2% Retracement of the ‘Brexit Move’

As we move deeper into the second-half of the year, the big question is whether this strength continues as markets gear-up for a possible BoE rate move in August or November, the two remaining ‘Super Thursday’ events on the BoE’s calendar for 2018. As we looked at this morning, that bullish move in the pair is still very new, and there’s a more pertinent trend-line that’s confluent with the three-week high that could be used to substantiate bullish approaches. Prices breaking above 1.3315-1.3320 could re-open the door to topside exposure in GBP/USD, with targets directed towards the 1.3450-1.3500 area that exhibited both strong support and resistance when the pair was heading-lower.