- There’s a number of high-impact drivers on the economic calendar for this week as we move towards the end of Q2 and the first-half of 2018. We have high-impact USD data every day for the remainder of this week, and Europe takes the spotlight on the latter-portion of the calendar as a set of key inflation prints out of Germany (Thursday) and the Euro-Zone (Friday) will receive considerable focus after the ECB’s dovish outlay earlier in the month.

- US stocks remain under pressure and this has been a rather continuous theme since the Fed’s rate hike earlier the month. We looked into the Dow Jones Industrial Average earlier this morning, watching for a bullish trend-line taken from the February, April and May lows to come into play after prices broke below a big zone of support yesterday.

The US data for this week gets underway this morning with the release of US consumer confidence numbers for the month of June, and after this morning, we get high-impact US data every day for the remainder of this week. This week marks the final week of Q2, so we also have the potential for quarter-end flows to show-up through price action, and this can often bring counter-trend movements to what were some of the more prominent themes in the closing quarter. 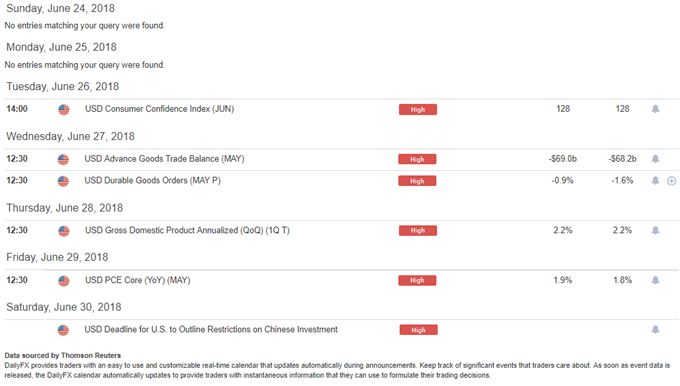 One of those prominent themes in Q2 has been a return of US Dollar strength after a year-plus hiatus. The Dollar began trending lower in January of last year, and that theme of weakness largely remained into the second quarter of this year. A bit of Fibonacci support had shown in the Greenback in February, but bulls were unable to do much with it until the ECB rate decision in April. As the ECB went dovish, largely in response to lagging inflation and slowing economic data, EUR/USD dropped and the US Dollar started to catch a bid. The month of May saw European political risk re-enter the equation after the events in Italy, and that risk remains; but the big factor of capitulation appeared around the European Central Bank’s June rate decision. This is when the ECB finally announced details behind their strategy to exit stimulus, but while doing so also said that they anticipate rates staying at current levels ‘at least through the summer of 2019.’

This dashed hopes for higher rates in Europe, and since then we’ve seen a bit of continuation in both of those themes: Euro weakness as rate hike bets get priced further-out into the future, and US Dollar strength as the Fed remains one of the few games in town for rate hikes from developed economies. This helped the US Dollar to set a fresh 11-month high just last week. Since then, prices have started to pullback, and yesterday we looked at an interesting support zone that runs from 94.20-94.30 on DXY. The price of 94.20 is the 38.2% retracement of the prior sell-off, and so far this level is helping to hold the lows after that pullback has started to show.

On a longer-term basis, the US Dollar retains the potential for bullish continuation, particularly with prices remaining above the prior June swing-low around 93.30. The big question, at this point, is whether we get a deeper pullback as Q2 winds down, as traders take profits from what became an outsized move in the second quarter of this year.

Going along with that hold of support in the US Dollar has been a hold of resistance in EUR/USD. We’ve been following a zone in the pair that runs from 1.1685-1.1736. Each of those prices are taken from longer-term Fibonacci studies and over the past ten months, we’ve seen multiple support/resistance inflections from this area.

The big question at this point is whether bears re-grasp control ahead of Quarter-end. On a longer-term basis, the short-setup could be a bit clearer, as we have the prior area of resistance to use for stop placement that runs from 1.1821-1.1855. But, given the distance to that stop, short positions could be challenged over the next couple of days as we’ve seen buyers continuing to show up at higher-lows over the past few trading days.

We had looked at the short-side of Cable yesterday as a long-USD candidate for this week, and the potential for bearish continuation remains. While the pair has exhibited similar overtones to EUR/USD, GBP/USD has been a bit more subdued on tests of prior resistance, and bears have seemed to be a bit more aggressive at re-entering the market. Since last Thursday, as EUR/USD has been making higher-lows, GBP/USD has held short-term resistance at the 1.3304 area, and this keeps the door open for short-side setups.

On the other side of the US Dollar, we looked at a setup in USD/CHF. Despite the fact that the Dollar has been really strong since mid-May, USD/CHF has continued to show tendencies of a bearish turn after failing to hold above the parity level. This can keep the pair as one of the more interesting short-side USD candidates or, at the very least, as an attractive instrument to hedge off long-USD risk from other setups, such as EUR/USD or GBP/USD.