US Dollar Primed for FOMC; EUR/USD Grasps on to Support Ahead of ECB

- The next 24 hours bring two pivotal rate decisions to the forefront of global markets. At 2PM ET this afternoon, we hear from the Federal Reserve at a rate decisions that’s widely-expected to bring another 25 basis point adjustment. More pressing, however, is the bank’s tolerance towards a fourth hike in 2018, along with the recent item of whether the FOMC may start to host press conferences around each rate decision, as opposed to the current format of hosting press conferences after every other meeting. We looked at a couple of setups on either side of the US Dollar in yesterday’s Analyst Pick, entitled EUR/USD, USD/JPY with Bullish Prospects Ahead of FOMC, ECB, BoJ.

- Tomorrow brings an ECB rate decision in which market participants are looking for the initial details for how the bank may look to gradually exit their massive QE program. The current program is set to expire in September of this year, and after tomorrow’s meeting, there is only one more rate decision before that September end-date, set for July 26th.

US Dollar Primed for FOMC – Will the Bank Forecast a 4th Hike?

Today at 2PM ET brings the Federal Reserve’s June rate decision, and a hike as long been expected at this meeting. The more pressing concern is how optimistic the Fed might be towards an additional two hikes this year. In March, the Fed had a central expectation for a total of three hikes in 2018, or one more after today’s meeting; and that appeared to be well-received by risk markets, and US data has continued to print in a positive manner. At this stage, there’s a 47.2% probability of getting two more hikes in 2018 to bring the total to four, and that appears to be where the source of today’s USD volatility will emanate from, expectations around a fourth interest rate hike in 2018.

Another item of interest popped up during yesterday’s session. A report began to circulate indicating that the Fed may tweak their transparency in a goal of becoming less predictable. Many will probably remember that FOMC rate decisions didn’t always come with an accompanying press conference. That was rolled out in 2011 in the effort of being more transparent with markets; and given the backdrop at the time, it was essentially an opportunity for the Fed to soothe the concerns of market participants by telling them that rates will remain low for the foreseeable future. That element of transparency can be a really good thing in a low rate environment as it drives confidence into markets that the monetary backdrop will remain accommodating, but can the same be said about a rising rate environment?

The primary concern at the Fed appears to be the pattern that has developed in which the Fed has only hiked at meetings with press conferences, or every other rate decision. The report circulating yesterday indicated that recently installed FOMC Chair Jerome Powell may begin to host press conferences at every FOMC rate decision, and this would make it more difficult to forecast when exactly the Fed is planning their next rate hike(s).

The immediate response to that circulating report was a show of USD-strength, and prices moved-higher within the ascending channel that we looked at yesterday. With context, that ascending channel may be a bear flag formation, as prices have started to rally after pulling back last week, and that keeps the door open for bearish strategies in the US Dollar.

On a longer-term basis, the US Dollar has held support around the 23.6% Fibonacci retracement of the bullish move that started in February of this year. The confluent zone of resistance remains in the zone that runs from 94.19-94.30, and topside breaks above that area open the door for a re-test of the 95.00 level on DXY.

If we aren’t able to hold this support through today’s rate decision, however, the door is opened for a deeper bearish move, and that area around 92.50 could be attractive for the next downside target, as this is near the 38.2% of the 2018 bullish move (92.44), and this syncs up with the January swing-high in the pair (92.64).

ECB is On Deck – How Much Detail Will Be Provided Around QE Exit?

Not more than 18 hours after the Fed’s rate decision brings another key event to markets. This is the European Central Bank’s June rate decision, and over the past week the building hope is that we might hear how the bank will look to begin tapering their stimulus purchases when the current QE program reaches its September, 2018 end date.

The ECB’s Chief Economist, Peter Praet openly said last week that the ECB would begin to discuss the bank’s gradual exit from QE at tomorrow’s rate decision. This comes from a bank that never pre-commits, so we may not be looking at an unconditional exit strategy; and we may not even get many details as to how the ECB is going to do this, instead pushing that forward to the bank’s July rate decision.

More pressing, however, will be the staff projections out of the ECB, and where the bank sees inflation moving towards the end of the year and in the early-portion of 2019. Last month’s inflation print surprised to the upside, coming in at 1.9%, just underneath the ECB’s 2% target.

Euro-Area Inflation Surprises to the Upside in May 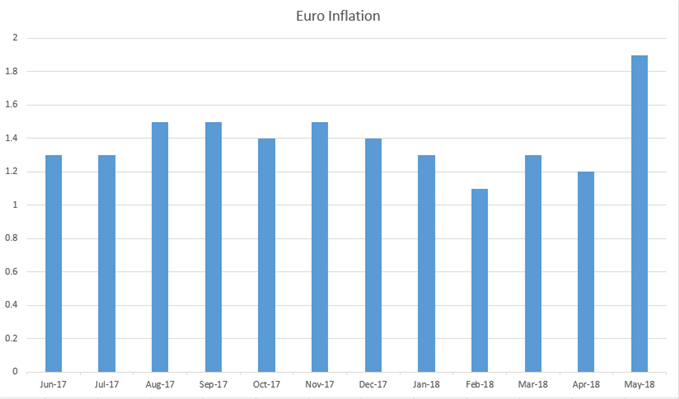 That report was at least partially obscured by the political turmoil at the time, as an aggressive bearish move had just shown in the currency after the volatility coming from Italian politics. As political risk has calmed in the Euro-Zone in the two weeks since, buyers have come back into the currency to push EUR/USD back-above a key zone on the charts. This area runs from the prices of 1.1685-1.1736, and each of those levels are taken from longer-term Fibonacci studies. This zone helped to provide support on a number of occasions last year, only breaking after the ECB extended stimulus into 2018, at which point sellers started to use that zone for resistance.

Two weeks later, a red-hot German GDP report brought strength back into the single currency, and prices pushed back-above this area. After support swings in November and again in December, prices launched up to a fresh three-year high around 1.2500.

On a shorter-term basis, we can see where this zone has come into play over the past couple of weeks as buyers have returned, most recently yesterday after that quick rush of USD-strength on the circulating report of the FOMC hosting a meeting after every rate decision. This now gives a couple of different support tests around the top-side of that zone, along with a descending trend-line taken off of this week’s highs. This would make for a descending wedge pattern on the four-hour chart of EUR/USD as we approach two pivotal rate decisions over the next 24 hours.