US Dollar, EUR/USD Hold Support Ahead of FOMC, ECB

- US CPI for the month of May printed in-line with expectations at an annualized 2.8% on the headline read, opening the door for a rate hike out of the Federal Reserve at tomorrow’s rate decision. With a hike at tomorrow’s meeting long-expected, the bigger question is what the bank might be looking for in the second half of the year. At our last quarterly meeting in March, the central expectation at the bank was for three hikes, which would allude to one more after tomorrow’s move. Has the last quarter produced a backdrop with which the Fed can get more hawkish in the second half of 2018, looking for an additional two hikes to bring the total for this year to four?

- The US Dollar posed a muted reaction around this morning’s inflation release, highlighting the fact that market participants are looking ahead on the economic calendar, as the next few days bring a considerable amount of potential for volatility. The Fed’s rate decision is followed by the ECB on Thursday morning, and after last week’s reports that the bank may begin to discuss options around stimulus-taper, Euro has recovered from the May swoon that was driven by an uptick in political risk.

US Inflation Prints In-Line for May, Focus Moves to FOMC, Tomorrow at 2PM ET

Tomorrow afternoon brings the June rate decision out of the Federal Reserve, and a hike at tomorrow’s meeting has long been expected. At this point, we can move forward with the reasonable expectation that tomorrow’s move is already priced-in, and market participants’ focus is looking ahead to what the bank is looking for in the second half of this year. This will be delivered via the dot plot matrix, and at our last quarterly meeting in March, the central expectation was for a total of three hikes in 2018, which would entail one additional move after tomorrow. This would allude to another hike in either September or December; but should the Fed signal a fourth potential hike this year, we could see USD-strength continue as markets begin to price-in a more hawkish Fed.

At this stage, the US Dollar is holding the support area that we looked at last week, and this takes place around the 23.6% Fibonacci retracement of the recent bullish move.

On a shorter-term basis, a bear flag formation appears to be forming after a couple of different failed tests at that longer-term support last week. This has produced an upward-sloping channel on the hourly chart that appears to be corrective in nature, and this can keep the door open for shorter-term bearish strategies around the Greenback as we move towards tomorrow’s rate decision.

EUR/USD Back Above Key Support

The European Central Bank is waiting in the wings for their own rate decision less than 24 hours after the Fed announces; and last week’s report that the ECB may roll-out details on stimulus taper has helped EUR/USD to recover after an aggressive sell-off lasted for most of the month of May. In that sell-off, EUR/USD sank below a big zone of support that runs from 1.1685-1.1736. The price of 1.1685 is the 23.6% Fibonacci retracement of the 2008-2017 major move, while 1.1736 is the 38.2% retracement of the 2014-2017 move (the ECB QE-fueled sell-off in the pair). Perhaps more importantly, this zone has elicited numerous examples of both support and resistance, helping to hold the lows on multiple occasions in the latter-third of last year, with price only falling through after the ECB extended stimulus into 2018, at which point this area showed as resistance.

A couple of weeks after that stimulus extension from the ECB, a red-hot German GDP report was issued and prices quickly re-engaged above this zone. After a support test in late-October, and again in December, prices launched up to fresh multi-year highs, eventually failing at the 1.2500 level.

When the Euro sell-off was hitting full speed in May, this area acted as a mere speed bump. We then saw a couple of days of resistance, and last week’s report of a potential announcement of stimulus taper has helped prices to move back above this zone. Since then, we’ve seen a hold of that support on a couple of different tests, and this has helped to produce a bullish pennant in short-term EUR/USD price action.

If EUR/USD holds above this support zone through this week’s FOMC and ECB rate decisions, the door remains open for a deeper recovery in the pair, targeting towards the 1.2000 level. This is something traders should approach cautiously, as the European Central Bank may not yet be in a position where they can fully forecast the end of QE. This may be more of an opportunistic attempt at the bank to begin talking about the prospect of stimulus exit while the Euro is very weak.

GBP/USD Remains in Bear Flag – UK Inflation is On Deck

Before tomorrow’s FOMC fireworks we get an updated look at inflation in the UK. This has very much been a push point for the British Pound of recent, as the high rates of inflation that were seen in the latter-portion of last year, pushing rate expectations around the Bank of England higher, have dissipated as we’ve traded into 2018. Last month’s inflation showed further drawdown, printing at an annualized 2.4% for the third consecutive month of slower price growth. 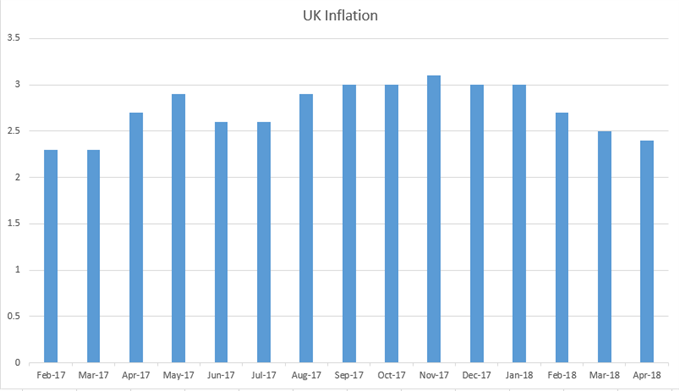 Tomorrow’s inflation release of May data will be helpful for evaluating the potential around this theme. In GBP/USD, the bear flag formation that we looked at last week remains, and the support side of that channel is in the process of being tested. Last week saw a failed attempt to test the prior support zone that runs from 1.3478-1.3500; but sellers showed up ahead of that area and price action has continued to run within the framework of this channel. This keeps a bearish tonality in the pair, and GBP/USD remains as one of the more attractive options for working with USD-strength as we move towards tomorrow’s UK CPI report, and the Fed meeting on the calendar for later in the day.