- It’s been a counter-trend kind of week across FX markets, as the US Dollar finally posed some element of pullback in the six-week bullish trend, and EUR/USD began to recover after the recent politically-fueled sell-off. GBP/USD posed a mild bounce, finding resistance at the 23.6% retracement of the recent bearish move; and this retains the appearance of a bear flag formation as we move towards next week.

- Next week brings a series of high-impact rate decisions from three of the world’s largest Central Banks with the FOMC on Wednesday, the ECB on Thursday and the Bank of Japan on Thursday evening/Friday morning in Japan. Also of interest on the economic calendar is British inflation for the month of May, set to be released on Wednesday morning.

Next week is a big one for FX markets with a number of key themes on the radar, and that statement can likely be applied across a number of asset classes as we’re going to hear from the Federal Reserve in a meeting that’s widely-expected to bring a rate hike. This is then followed by the European Central Bank at a rate decision that’s been rumored to be the start of stimulus-taper conversations. And this is followed by the Bank of Japan, which should elicit some interest around FX markets as the Yen has recently become a bit more volatile, surging on risk aversion flows and then dropping again when ‘risk-on’ themes permeate back into markets.

Also of relevance – UK inflation for the month of May is to be released next Wednesday morning, and this should be a big one considering the flurry of comments that came out of the various members of the Monetary Policy Committee at the Bank of England this week. Inflation has very much been a push point for the BoE, and the continued drawdown in inflation has been a large driver behind the move of weakness that started in the currency seven weeks ago. Can that trend be broken by stronger inflation, opening the door for a possible rate hike out of the BoE in August? 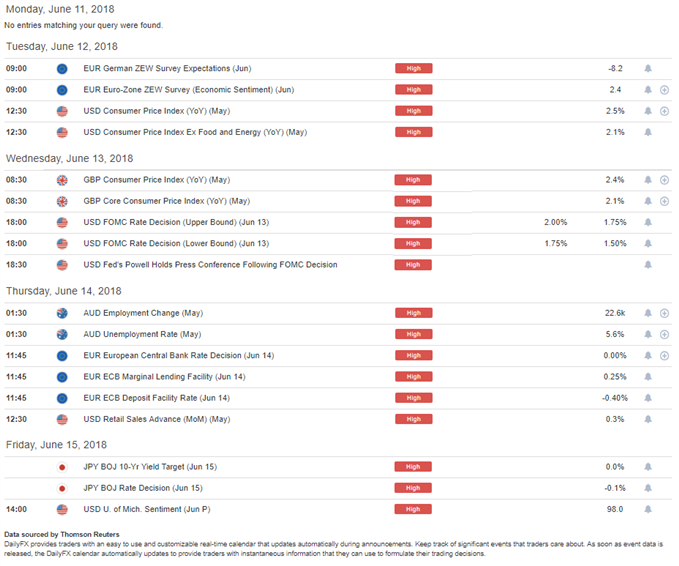 US Dollar Bounces After Four Consecutive Days of Weakness

It was a tough start to the week for the Greenback as the US Dollar fell for four consecutive days, and this comes on the heels of a doji formation printing last week on the weekly bar of DXY; something that can show up ahead of a reversal of trend. Next week brings inflation numbers out of the US on Tuesday, followed by the Fed on Wednesday.

The primary culprit behind this week’s move appeared to be a recovery in the Euro that remains in question as we near the end of the week. EUR/USD gyrated around resistance for the first few days of this week, getting a leg of life when the announcement came out that the ECB may be looking at stimulus taper options at their rate decision on the schedule for next week. As EUR/USD broke-higher, USD broke-lower and that theme largely remained until we got to Friday of this week.

US Dollar via ‘DXY’ Four-Hour Chart

At this stage, the pullback is a mere 23.6% Fibonacci retracement of the prior bullish trend; so it would still be early, but price giving up support here opens the door for a deeper drop towards the 38.2% marker around 92.50, and a break-below that re-opens the possibility of continuation in the longer-term bearish trend. This theme would likely need an assist from the European Central Bank with a more orchestrated strategy or timeline for QE-exit at their rate decision next week.

US Dollar via ‘DXY’ Daily Chart: A 23.6% Pullback in the Recent Bullish Move

The ECB rate decision on Thursday could be a big one, and I say ‘could’ because frankly we don’t quite know what yet to expect. The fact that the ECB may be using the recent struggle in the Euro to roll out details on QE-taper appears to be an opportunistic move. Earlier in the year, the ECB harbored the fear of creating a real quagmire for themselves by talking about stimulus taper or exit while the Euro remained strong. This could have served to bring even more strength into the single currency, which would then dent inflation, making the ECB’s job of normalizing rates even more difficult. So they largely avoided the topic as often and as much as they could; and after the recent draw of weakness as driven by European politics, ‘sources’ began to indicate that the ECB may begin to discuss this at next week’s rate decision.

This gives Mario Draghi and the ECB a bit of flexibility at Thursday’s rate decision, at least more than what was had at previous rate decisions in which Euro-strength very much remained a risk to the ECB’s forward-looking forecasts.

The bullish breakout that we were following in EUR/USD this week eventually found sellers at our second zone of resistance, running from 1.1821-1.1855; and prices have since moved down to the 23.6% retracement of the recent sell-off. This retracement level is confluent with a batch of prior swing highs, and this keeps the door open for topside strategies in the pair as we approach next week’s FOMC/ECB meetings.

GBP/USD Remains in Bear Flag, May Inflation Numbers on Deck

T he British Pound has had a couple of very volatile long-term swings over the past few months, very much driven by expectations around rate policy from the BoE. As recently as April it appeared as though the bank was going to have to remain hawkish, largely in response to aggressive inflation that hadn’t yet slowed down. That’s around the time that inflation started slowing down, and from mid-April, bears very much had control of GBP/USD.

The pair fell by more than 1,000 pips from mid-April to late-May, and so far in June prices have trended-higher. But that trend is rather meager in regards to the prior bearish move, resisting just shy of the 23.6% retracement earlier this week; and this keeps this recent up-trend as a bear flag formation in GBP/USD. This could also keep the pair as one of the more attractive candidates for playing a continuation of US Dollar strength.