- US Dollar strength has continued as USD opened the week by gapping-up and then running to fresh 2018 highs. This morning’s European open saw DXY test the 94.00 level for the first time in 2018, and prices have been pulling back since. There’s a portion of remaining unfilled gap (as of this writing) just underneath current price action.

- USD strength has been persistent, and this has helped to produce tests of longer-term support areas in both NZD/USD and EUR/USD. Meanwhile, GBP is on the offer after Scottish Prime Minister, Nicola Sturgeon, pledged to ‘re-start’ the campaign for secession from the UK; and this comes ahead of a slew of GBP-drivers on the economic calendar for later this week.

US Dollar: Bulls on Parade

The bullish breakout in the US Dollar continues, as DXY gapped-higher to open this week’s trade and continued to run into the 94.00 level. This was the first test of that area so far in 2018, and after trading at that level around this morning’s European open, prices have started to digest a portion of those recent gains while posing an early-week pullback.

There is a small amount of remaining unfilled gap from this week’s open, and this could be an opportunistic support level to follow to look at short-term bullish continuation strategies in the US Dollar. This area runs from 93.67-93.69, so it’s a rather tight gap; but if we do see support show in this area, the door remains open for topside. If this area doesn’t hold, there are a couple of additional support levels underneath current price action that can remain interesting for Dollar-bulls. Around 93.35, we have a prior area of resistance that helped to show some support; and below that we have a zone that runs from 93.05-93.14 that could be looked at as an ‘s3’ level as we open up a fresh week. 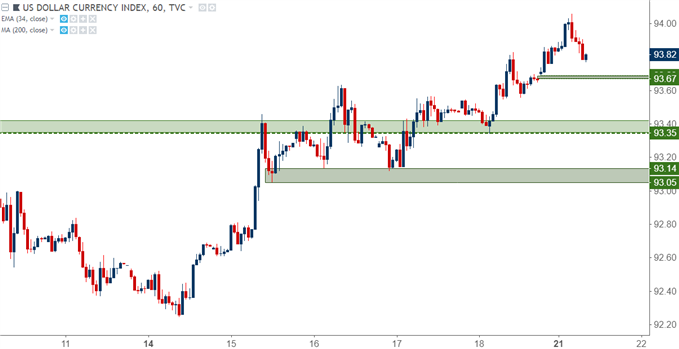 The level of 93.35 could be particularly interesting for longer-term support. This was the price that helped to form the evening star formation two weeks ago, and that led to the deepest pullback that we’ve had in the Dollar’s bullish run that started a month ago. Tuesday and Wednesday of last week saw bulls battle through this level, with Thursday helping to produce a quick iteration of support around this area before buyers punched up to those fresh highs.

US Dollar via ‘DXY’ Daily Chart: 93.35 for Longer-Term Support Potential 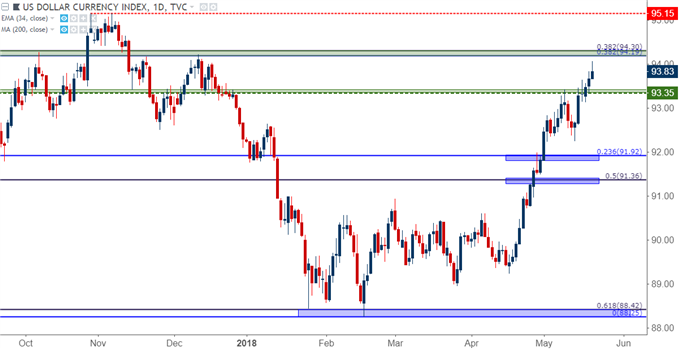 It’s been largely a one-way show in EUR/USD over the past month, and we looked at the short-side of the pair as one of our FX setups for last week. EUR/USD put in a plunge after a failed test at 1.2000; and prices are now finding support in a familiar area on the chart, as this is the same zone that had come into play last year in Q4 as the European Central Bank extended their stimulus program into this year.

This zone is comprised of two longer-term Fibonacci levels, with the prices of 1.1736 coming from the 38.2% retracement of the 2014-2017 major move; while the level of 1.1685 is the 23.6% retracement of the longer-term 2008-2017 major move. This area had helped to hold support in a couple of different instances last year, first in August and again in September and October. This area finally yielded to selling pressure around the ECB’s October meeting in which the bank extended stimulus. But two short weeks later, bulls were back after a red-hot German GDP report, and this area was being used as support again in November and December before bulls were able to run-up to 1.2500.

EUR/USD Daily Chart: Prices Pull Back to a Familiar Zone of Prior Support 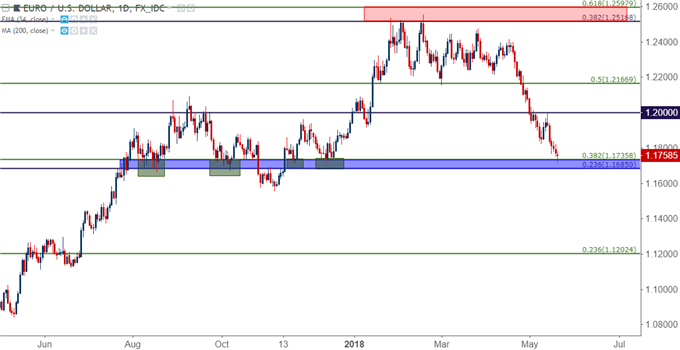 At this stage, a bullish approach in the pair could be a challenge given how aggressively this move has come-in. The lone bullish approach at this point would be of the reversal variety, looking for the tides to turn after what’s been a really bearish past month of price action.

GBP/USD has opened the week by rushing down to fresh 2018 lows. The prior 2018 low around 1.3465 had held up fairly well throughout last week, even with the US Dollar continuing to surge. But as we open a week with a rather interesting outlay of British data, bears have punched the pair-lower in advance of the drivers. Tomorrow brings a speech from a slew of BoE members including Governor, Mark Carney, and Wednesday brings the most recent inflation data to the table. This has been a big driver in GBP of recent, and last month’s disappointing print is what helped to elicit such an aggressive reversal in the pair. After that, we get some more BoE-speak on Thursday, followed by preliminary UK GDP on Friday.

DailyFX Economic Calendar: High-Impact GBP Events for Week of May 21, 2018

At this stage, it can be difficult to muster a bullish scenario for the pair, as we’ve seen over 900 pips taken out of the pair’s price since mid-April, sliding through a number of support levels in the process. Underneath current price action, there’s an area of interest that runs around the 1.3300 level, as a group of swing-highs had developed here last year. This would be an approximate 50-pip zone, so there’s some margin of error to work with; but if this is unable to hold, the Fibonacci level at 1.3117 is exposed. 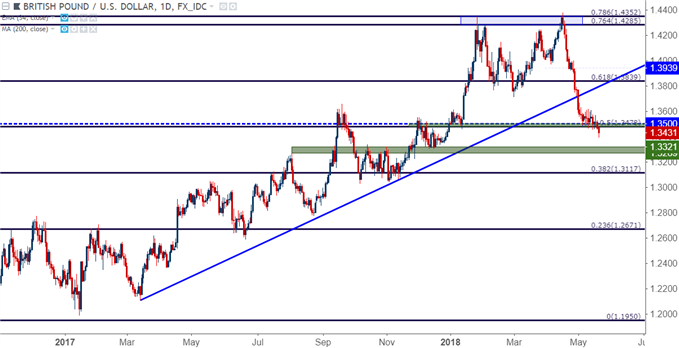 On a shorter-term basis, the prospect of bearish continuation remains; and with this morning’s break down to fresh 2018 lows, the door opens for short-side setups. That prior zone of support from 1.3478-1.3500 had helped to hold the lows of the pair for the first half of May, only yielding to selling pressure on Thursday and Friday of last week. At this stage, we haven’t yet seen resistance show at this area of prior support, so this exposes that zone for bearish continuation strategies. 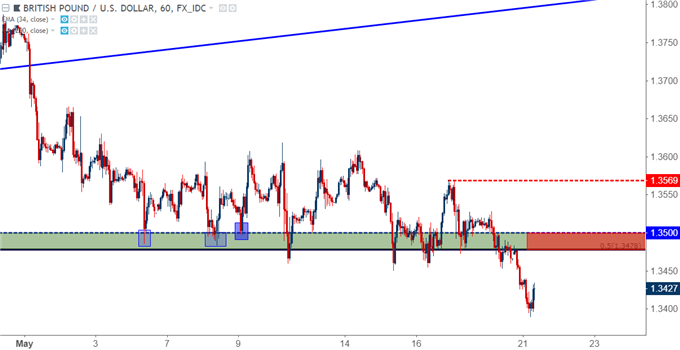 For USD Reversals, Look to NZD/USD

The pair that we started following in mid-April for a play on USD-strength was NZD/USD. The pair was working around a zone of longer-term resistance at the time, as part of a range-formation that had been active since the summer of 2016. It’s been a brutal five weeks since, and prices are now in the support side of that range for the first time in 2018. For those looking to play a reversal in USD, the support side of this range would likely be very attractive for such an approach, particularly given the proximity to multi-year lows that could be used for stop placement. 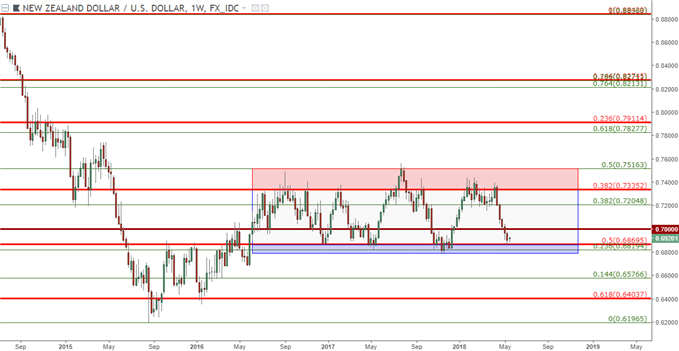