- The theme of US Dollar strength remains in the spotlight this week as we get the release of April inflation numbers. March inflation printed at fresh one-year highs, and since then we’ve seen a remarkable turn-around in the Greenback as the currency appears to have awoken from its 2017 slumber. The big question is one of continuation potential – as the US Dollar remained weak in the immediate aftermath of last month’s inflation print; only starting to surge a week later around the release of UK inflation numbers for the month of March.

- The expectation is for US inflation to have risen by 2.5% in the month of April, and this will keep the US Dollar in the spotlight in the near-term as the bullish breakout from the past few weeks has continued in a rather noticeable manner. Also on the calendar are rate decisions out of the Bank of England and the RBNZ; and noteworthy is a light Euro calendar as EUR/USD has sunk down to fresh 2018 lows to start the week.

This week’s economic calendar is back-loaded, with a series of high-impact events on the docket for later in the week with a lighter outlay up front. On the Central Bank side of the coin, we have an RBNZ rate decision on Wednesday followed by a ‘Super Thursday’ event from the Bank of England on Thursday morning. Given the aggressive weakness that’s shown in the British currency since mid-April, this event will very much be in the spotlight. Also of pertinence will be inflation prints out of China (Wednesday night) and the US (Thursday morning), followed by Canadian employment numbers on Friday. 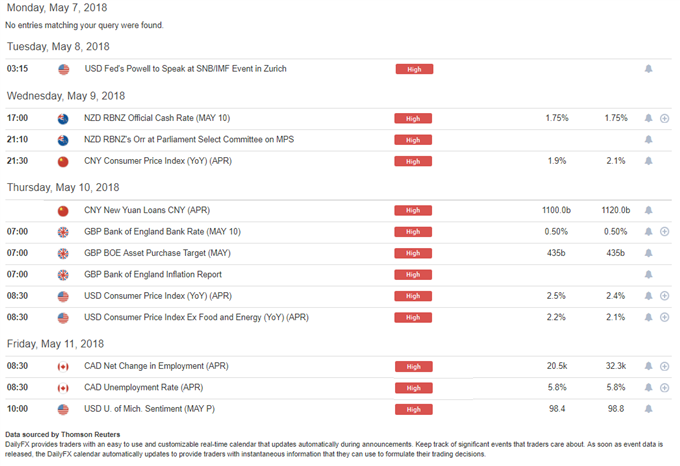 US Dollar Opens Week at 2018 Highs

Coming into April, the US Dollar down-trend had been going for well-over a year, and this was happening as the Federal Reserve was one of the few Central Banks actually hiking rates. The fact that this down-trend was so pronounced despite the fact that the Fed was one of the few hawkish CB’s out there alluded to the fact that there was something else doing the pushing; and from the January, 2017 high to the February 2018 low, the US Dollar had lost as much as 15% of its value. This was an approximate 61.8% retracement of a previous bullish trend that ran from 2014 to 2017, and after hitting support there in mid-February, the Greenback oscillated back-and-forth as we closed Q2 and moved into April.

Since mid-April, however, the US Dollar has displayed a far different tonality. Many are attributing the Dollar’s recent bullish breakout to stronger forces of inflation, and while the higher rates of inflation are true, that doesn’t necessarily mesh with US Dollar price action. March inflation numbers were released on April 11th, and USD weakness continued into April 17th, at which point DXY found support at a bullish trend-line while setting a low around 89.23. And this is when UK inflation figures for March came out to a disappointing tune, bringing an aggressive reversal into GBP/USD, and this is when USD strength really started to show.

The next week saw the Greenback surge into a prior area of resistance around 91.00, and after a quick stop there, bulls continued to push up to fresh highs. The European Central Bank rate decision in late-April was another push point for USD-bulls; and this happened as a deeper retracement developed in EUR/USD after the bank took a dovish outlook to markets. The US Dollar was soon testing 2018 highs, and after a quick bit of resistance last Thursday, buyers have showed back up to help propel prices to a fresh higher-high.

US CPI to be Released on Thursday Morning

The big item on the calendar for this week around the US Dollar is CPI, set to be released on Thursday morning. Last month saw this print at one-year highs of 2.4%, and as mentioned earlier, this wasn’t exactly a bullish driver to the Greenback at the time of release. Nonetheless, this print should receive considerable focus as the prospect of tighter Fed policy has come further in the spotlight since that prior inflation release. The expectation for Thursday’s print is 2.5% for headline CPI along with a 2.2% gain in Core CPI. 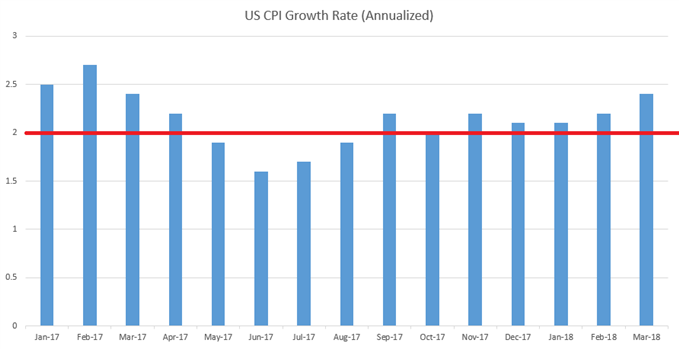 Last week saw a continuation in the bearish move in the Euro that started after the ECB meeting from the prior week. After sliding below the 1.2000 level, sellers came-in to offer resistance there on Wednesday and Thursday before prices slid down to find support at the prior 2018 low of 1.1914. Support held above there after this week’s open, but as the US comes online, prices have slid even-lower to find a bit of support off of the 1.1900-handle.

Coming into April, expectations were high for a rate hike at this week’s Bank of England Super Thursday rate decision. But, April was a brutal month for that theme, and as we opened into May, a rate hike this Thursday began to look not so likely. UK inflation put in a fairly noticeable drop in the month of March, and this opens the door for the BoE to go more dovish as inflation has started to peel away from the 3% prints that became commonplace in 2017.

GBP/USD had found resistance in mid-April at the 78.6% retracement of the ‘Brexit move’ in the pair at 1.4352. This led into a bearish pin bar, which then led into a rather aggressive reversal. Last week saw prices sink down to test the 1.3500 psychological level, which is just 22 pips above the 50% retracement of the Brexit move, amounting to a rather sizeable sell-off in just a few weeks.

As we near Thursday’s rate decision, Cable continues to remain supported around the 1.3500 level, opening the door to the possibility of reversal setups in the pair. RSI remains in oversold territory, and the indicator is at its weakest level since from around the ‘flash crash’ in the pair in October of 2016.

Also offering a rate decision this week is the RBNZ, and there are few expectations for any actual moves here. As we near that meeting, NZD/USD is finding support at the big figure of .7000, and this has been the case now for most of the month of May.

NZD/USD was previously one of our favored USD-strength candidates, and after a smooth move saw the pair sink from above .7300 down to .7000, prices have shown some semblance of support around the psychological level. This could make the pair attractive for short-side continuation should prices bounce; exposing that .7000 level for a re-test should lower-high resistance come-in. We’d previously looked at two areas of potential resistance for a lower-high, inside of prior swings at .7095 and .7153; but given the gyrated price action that’s shown since .7000 has come into play, a third potential resistance level has availed itself around .7050.