US Dollar Finds Resistance at 2018 Highs Ahead of FOMC

- The US Dollar put in a failed test of the 2018 high during yesterday’s session, and prices are posing a shallow pullback after that resistance came into play. This has produced a short-term bull flag formation in USD as shown in ‘DXY’ below.

- The rest of this week has considerable headline interest around the Greenback, as today brings the May FOMC rate decision and Friday brings Non-Farm Payrolls for the month of April. Tomorrow brings Euro-Zone CPI, so there are non-USD items of interest, as well; but the predominant focus across FX markets will likely be squarely centered around the US Dollar.

US Dollar Tests 2018 Highs Ahead of FOMC, NFP

Later this afternoon we get the May rate decision out of the Federal Reserve, and there are few expectations for any actual moves; far more interesting will be any potential signals made towards future policy. As we approach the results of that rate decision, markets are pricing in only an approximate 5% chance of a rate hike at today’s meeting; but attention will be squarely focused on the bank’s tolerance to a hike in June and, further, their stance for the remainder of the year. There are no updated projections or dot plots at today’s meeting, so inference will be key and the driver will be in the details of the Fed’s statement.

Coming into April it appeared as though the Fed was looking for two more hikes in 2018 for a total of three interest rate adjustments. After a really strong inflation report a few weeks ago, expectations began to build for another hike for a total of four in 2018. But perhaps most important to USD price action was what happened outside of the US in the previous couple of weeks, when slower rates of inflation helped to drive-down expectations for tighter policy in Europe and the UK. This led to a sharp topside breakout in the US Dollar that hasn’t yet calmed. As we approach that rate decision a little later today, the US Dollar is testing its 2018 high, set just a few trading days after the open of the new year. This takes place around the 92.50 level, and since running into this yesterday morning, prices have started to pullback.

US Dollar via ‘DXY’ Daily Chart: Leaps Up To, and Finds Resistance at 2018 Highs 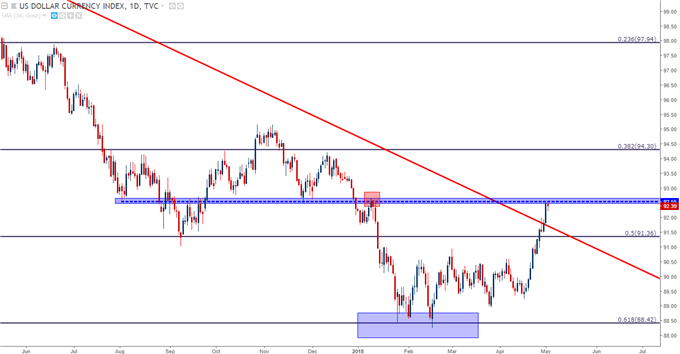 Since that resistance came into play yesterday morning, prices have been pulling back in a rather formulaic fashion, producing a down-ward sloping trend channel on shorter-term charts. When taken with the recent topside move, this makes for a bull flag formation, highlighting digestion of recent gains after a brisk bullish trend that got started a couple of weeks ago. 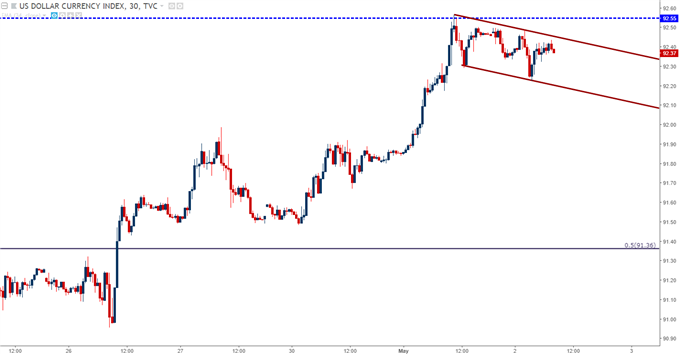 As we move in to today’s meeting, the bar for continued gains in the Dollar is rather high. RSI remains overbought on both four-hour and daily charts of DXY, and we haven’t seen the indicator this strong on the daily since the post-Election run in November of 2016. When that happened – prices eventually pulled back before making one more stretch-run up to fresh highs. And when that moved started to pullback in January of 2017, that led into the down-trend that was active for more than a year. So, RSI being at this elevated level does not portend a direct bearish scenario; but it does raise the bar for continued gains after such a fast shift in market sentiment. 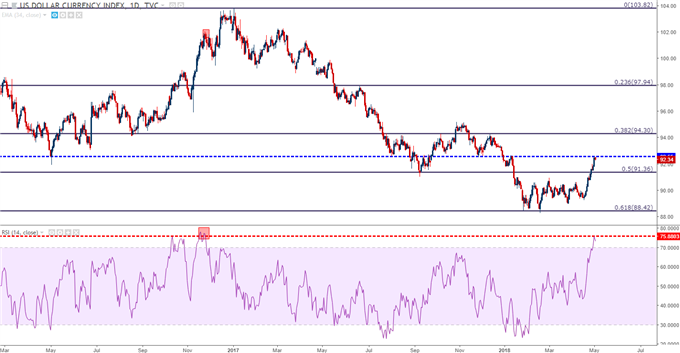 FOMC, then NFP on Friday

The remainder of this week has a couple of really big USD-related items; after today’s FOMC meeting, we go into Friday’s Non-Farm Payrolls. Given the backdrop of a short-term overbought move in USD after a really strong two-week run, and we may be seeing a longer-term trend shift away from the bearish move that’s driven the Greenback for well-over a year. This would bring a scenario attractive for bullish trend continuation in USD should a deeper pullback show. On the hourly chart below, we’re looking at a series of support levels that could be interesting for bullish continuation in the US Dollar. 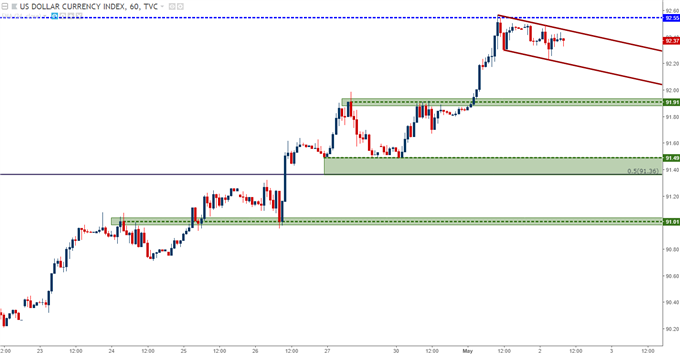 On Monday we looked at a couple of support levels in EUR/USD. At the time, the first of those levels was holding on by a thread, highlighting the interest of a deeper retracement towards the 1.2000 psychological level. Prices are now grasping on to 1.2000 as we approach today’s FOMC rate decision and this comes after a rather rigid bearish move showed from a confluent zone last week.

This presents a couple of interesting levels. That prior support zone now becomes an area of interest for bearish continuation, and this area runs from 1.2171-1.2090. On the under-side of price action, a prior swing-low from January becomes interesting for support; opening the door to potential reversal setups or short-side targets for bearish continuation strategies. 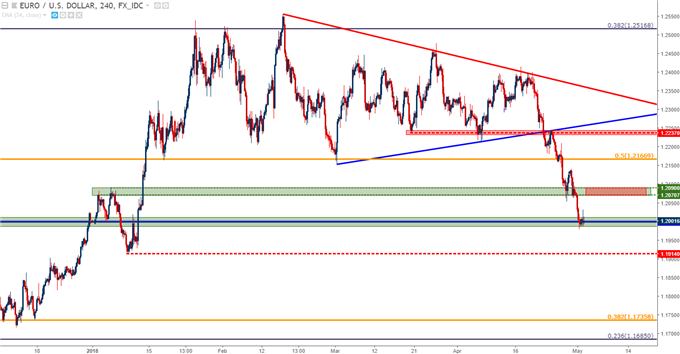 The past couple of weeks have been even more brutal to the British Pound, as a series of events in April helped to bring an aggressive reversal of a prior bullish move. Prices have broken-down below the bullish trend channel that’s guided the pair higher over the past year, and this keeps the door open for additional downside. The price around 1.3500 is especially attractive for support, as this psychological level had provided considerable resistance in GBP/USD in Q4 of last year. We eventually climbed above as we opened into 2018, and after a quick check of higher-low support, buyers were off to the races. 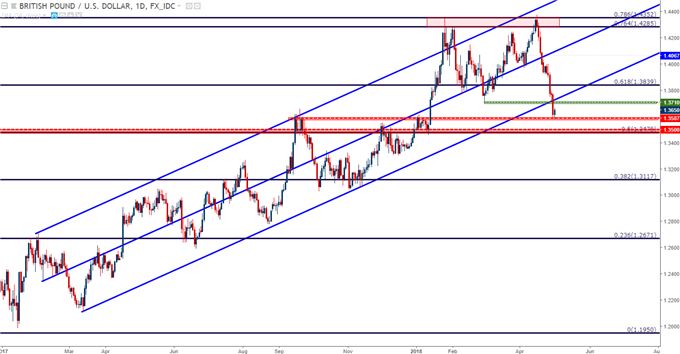 For short-term resistance, a prior area of support remains interesting for bearish continuation. The prior four-month low in the pair, set during an aggressive bounce in early-March runs around 1.3710. We saw a quick bit of support show here earlier in the week before bears went on a stampede-lower; but if we do get a check back to this area as resistance, short-side continuation becomes attractive, targeting towards 1.3587 and then 1.3500.

GBP/USD Four-Hour Chart: Resistance Potential at Prior Support of 1.3710 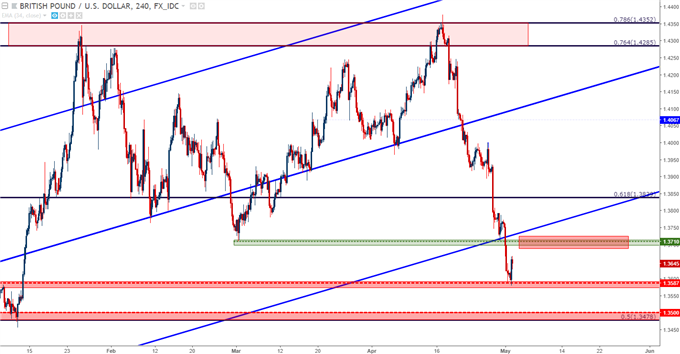