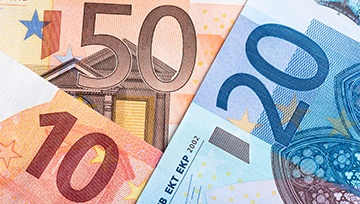 - This morning’s ECB rate decision saw the bank take a dovish tone while making no adjustements to monetary policy, both as was widely-expected. This helped to elicit a quick dip in the single currency, but that sell-off was limited as a bounce began to show shortly after the start of the press conference.

- This raises the question of whether Euro weakness will extend. While many were expecting a dovish tilt at this morning’s rate decision, the fact that weakness could not show more momentum may be a signal that EUR/USD is being driven by USD-trends; while a pair like EUR/JPY might be a bit more attractive for a fade of this morning’s quick-dip of weakness.

This morning’s ECB rate decision saw no move on rates as was widely expected. We did see ECB President Mario Draghi take a dovish tone, again, as was widely expected. And in response we saw an initial move of weakness in the single currency; but that momentum could not hold and we’re already seeing bounces starting to show. The key signal of dovishness at this morning’s rate decision wasn’t something that was said, but rather something that was left unsaid, and that’s what the bank might look to do when it comes time to move away from emergency-like monetary accommodation in the Euro-Zone.

As we were approaching Q2, the wide expectation was that we’d hear some element of a plan or strategy for what the ECB might do after September. And given the strength that had previously shown in the European economy, it made sense to look for a move towards ‘less loose’ monetary policy. But from all signs in the ECB’s statement this morning, the bank looks set to stay loose and dovish for the foreseeable future, even beyond the current QE program’s September end date.

During the opening statement at the press conference, Draghi specifically cited ‘moderation’ in data since the bank’s March meeting as a reason to remain cautious, while also pointing out that ‘underlying inflation remains subdued and has yet to show convincing signs of a sustained upward trend.’

All in all – this does not sound like a bank that’s close to a stimulus exit.

The net response was an initial hit of Euro-weakness, although that weakness was unevenly distributed; and we’re already seeing some bounce off of the lows. The downside move in EUR/USD was rather minor, while pullbacks in EUR/JPY and EUR/GBP were a bit more visible. Considering that the US Dollar is seeing strength after a very bullish week of price action, and a pullback in that theme can make sense; and that pullback in USD-strength is helping to offset some of this morning’s Euro-weakness.

Yesterday we looked at the level of 1.2167 in EUR/USD, and this is the 50% retracement of the 2014-2017 major move in the pair. This major move was the pricing-in of ECB QE, and over the past year as we’ve seen market participants trying to position for a stimulus exit, more than half of that prior bearish trend has been erased.

We’ve twice seen this level provide support earlier in the year: In mid-January and again in early-March. This was the three-month low in the pair until we tested through earlier this morning ahead of ECB. 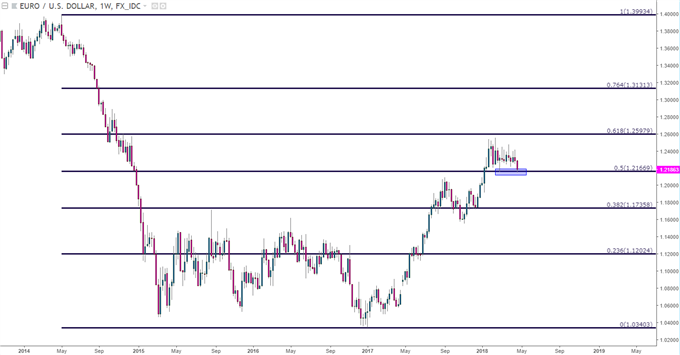 The big question around EUR/USD at this point is whether we’ll see a return of bullish price action. EUR/USD sank down to three month lows as US Dollar strength was piping-up over the past week, and this was very much based on the idea that the ECB could get some wiggle room to grow a bit more dovish given the recent slowdown in European data. But now that we have that in the books – are we going to see a continuation of EUR/USD weakness and USD strength?

On the four-hour chart below, we’re focusing-in on a key region around a prior point of resistance we looked at earlier in the week. This zone runs from around 1.2237 up to 1.2250, and this was a confluent point of resistance when sellers came back in on Tuesday. If we do see lower-high resistance from here, a re-test of 1.2167 becomes a possible play; but if we don’t see any resistance show, then we may have a deeper bullish move to work with in EUR/USD as those prevailing trends come back to order. 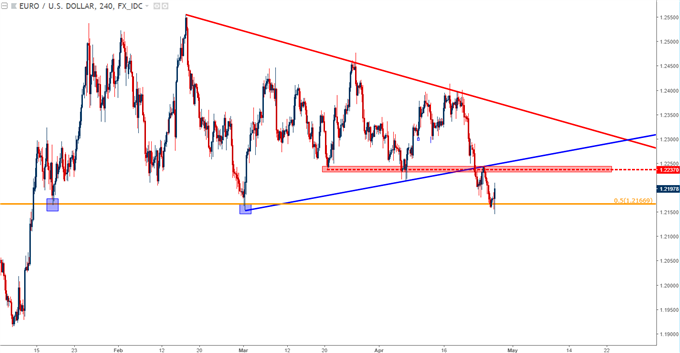 EUR/JPY Tests Below Prior Resistance as Bullish Trend Remains

As noted earlier, that initial dip in the Euro was a bit more visible away from the US Dollar. In EUR/JPY, we tested below a key point of resistance that had previously functioned as the two-month high in the pair; but bulls did return ahead of a trend-line re-test. This keeps the door open for bullish potential, and for those looking to trade Euro-strength after this morning’s rate decision, this may be a bit more attractive at the moment given the recent return of Yen-weakness. 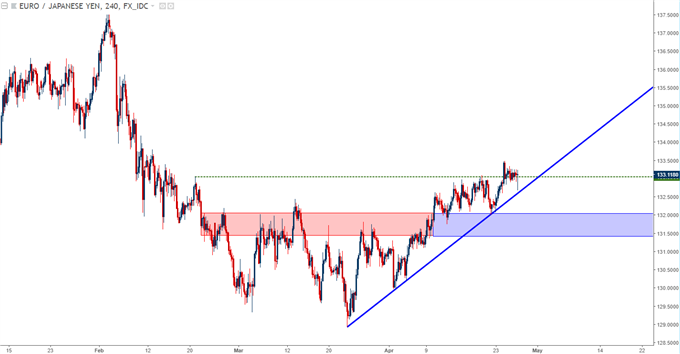