JPY In the Spotlight: Yen Weakness Shows Ahead of Japanese Inflation

- Tonight brings Japanese inflation numbers for the month of March, and of recent this has become a hot-button topic around the Bank of Japan as price growth in the Japanese economy printed faster than Europe in February. This highlights the potential for a shift-away from the uber-loose monetary policy that’s become par for the course at the Bank of Japan.

- As we’ve come into Q2, Yen-weakness has started to show again and this highlights the possibility of a continuation of trends that have been a rather attractive area of the FX market since the election of PM Shinzo Abe in 2012. Will tonight’s inflation print help markets move further back from the edge of risk aversion that showed in Q1, helping to drive Yen-strength?

Japanese Inflation is On Deck

There are two high-impact releases remaining on the DailyFX Economic calendar for the remainder of the week, and each are inflation prints. Later tonight, we’ll get Japanese inflation for the month of March and then tomorrow morning at 8:30 AM ET, we’ll get Canadian inflation numbers for the same period. Outside of that – we have both the US Dollar and EUR/USD sticking to their range-bound behaviors, making for a less-compelling backdrop for trends or momentum setups in those markets.

As we came into 2018, the Japanese Yen retained a general tonality of weakness from the theme that had started in 2012. This is when Shinzo Abe was re-elected to the PM post in Japan, and this came along with the ‘three pillars’ approach towards economic policy, later dubbed ‘Abenomics’.

A key part of that approach was Yen weakness. This would allow the export-heavy economy to ship more goods overseas, thereby helping to solidify domestic markets so that growth and inflation could return after a decades-long struggle with deflation. Initially, this showed some promise: The Yen-weakened for most of 2013 and 2014 and even the first part of 2015. And while inflation soon moved above the BoJ’s 2% target, it couldn’t hold, and the rate of price growth was back-below one-percent in short order. This gave the Bank of Japan considerable flexibility with their QE program, as there were few reasons to worry about consequences of ‘too much liquidity’ as inflation remained subdued.

Yen strength became an operable theme again after China’s ‘Black Monday’ in the summer of 2015. A worrying bout of risk aversion that ended up becoming a blip in the radar helped to elicit a 50% pullback in that prior theme of Yen-weakness. Support eventually set-in around the 100.00 level, and it was the 2016 Presidential election that helped to bring back weakness into the pair. This was driven by the presumption that in an environment of rising tides, the Yen would remain weak as inflation expectations moved-higher the world-around.

As last year’s USD-weakness began to take-over, a range developed in USD/JPY. That range held for the better part of nine months before finally succumbing to Yen-strength in the first couple months of this year.

USD/JPY Daily Chart: After Spending Most of 2017 in a Range, Bearish Trend Shows in 2018

This bout of Yen-strength appeared to be driven by a factor that started to change around December of last year. This is when inflation popped-up to one-percent for the first time in over a year, and this started to get attention from market participants, but we were still at 50% of the BoJ’s target. It wasn’t a pressing concern until we got deeper into 2018 and saw that inflation was continuing to climb at a rather aggressive clip. January inflation came in at a 34-month high of 1.4%, and then February printed at 1.5%. 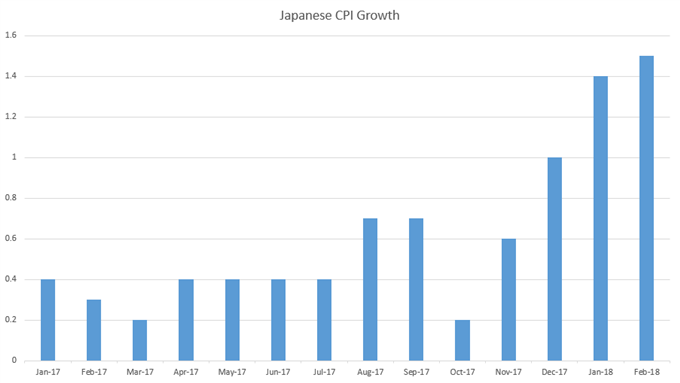 As this was happening, we started to see Yen-strength show against most currencies as those prior QE-fueled bets further unwound. There was a fear of ‘stealth tapering’ of the BoJ’s QE outlay, and there was a very legitimate threat of the Yen acting as the Euro did last year. This was marked by a very strong final eight months of 2017 that saw more than 2,000 pips of gains, driven by market participants gearing up bets for tighter policy out of the ECB, in large part due to a response in improving economic data.

That tighter policy from the ECB still hasn’t arrived yet, but the Euro continues to hold on to last year’s gains. The Yen started to show strength against the US Dollar in January, and put in a move of continuation in February which mostly held through March. But as we’ve opened the door into April, weakness has started to show again and this may be something that could remain as usable for FX traders.

The expectation for tonight’s inflation print is 1.1%, and if we do come-in here or below the expectation, that door remains open as we see even more pressure removed from JPY. If we do get something around the January read of 1.4% or higher, then Yen-strength may be on the way back as we will no longer be looking at a temporary blip of inflationary strength.

As we walk into tonight’s inflation data, the initial stages of Yen-weakness, or strength in USD/JPY has started to show. We’ve been following the build of higher-lows in the pair since the final days of March, and that’s largely continued since as buyers have continued to come-in to bid at higher-lows. This hasn’t been a runaway bullish response just yet, as that strength has waned as we’ve moved up to approach the prior swing-high at 107.90.

The Yen Away from the US Dollar

The complication with doing anything directional around the US Dollar at the moment is the drama that goes along with the US Dollar. Not only do traders have to contend with what’s become considerable headline risk based on a series of themes like trade wars; but there’s a well-built down-trend that’s more than a year old, and there are solid cases to be made for both continuation of that move as well as a short-squeeze scenario that could see prices retrace-higher. This makes for a tough backdrop when planning a long-term scenario.

More attractive for Yen-weakness may be currencies such as the Euro or the British Pound. While both EUR/JPY and GBP/JPY are rather volatile on an intra-day basis, longer-term setups in each pair will often incorporate these themes in a directional manner.

In GBP/JPY, a stark reversal of the prior year’s strength showed-up in February, and the pair sold-off by more than 1,000 pips. Support eventually showed at the 145.00 psychological level, and the month of March was mostly spent with prices gyrating higher, eventually finding resistance at an area of prior support.

That theme of GBP/JPY strength broke-out in early-April as we started to see a rather aggressive rally take shape in the British Pound. Prices were soon back above the post-Brexit trend-line, surging up to fresh monthly highs. The move pulled-back yesterday around the UK inflation print that helped to elicit a pullback in GBP, and so far we’ve seen support holding at prior resistance, which happens to come-in around a key Fibonacci level. We looked at the setup yesterday and since then, we’ve seen a continued hold of support as we near tonight’s Japanese inflation data.

The big question around GBP/JPY as we approach tonight’s inflation data is whether or not the current area of support will hold as the higher-low. For longer-term construction of the bullish trend, a deeper pullback may actually make the scenario a bit more attractive, as we have a support level around 151.39 that would be confluent with that post-Brexit trend-line.

We’ve seen a similar environment in EUR/JPY: A previously well-built bullish trend started to pullback in February and March, with strength starting to return in April. This opens the door to the possibility of continued gains in the pair, and we’ve been following a key zone of prior support/resistance in EUR/JPY. This zone runs from 131.43-132.05, and this area helped prices to find support for the final four months of 2017. This area eventually became resistance in March, and with prices moving back-up in April, it has re-emerged as support.

As we approach tonight’s Japanese inflation data, prices in EUR/JPY are testing two-month highs. We’ve seen a continuation of bulls coming in at higher lows, but as of yet, that bullish response has been rather subdued as strength has showed a tendency to wane near tests of prior highs. If we do see Japanese inflation soften at tonight’s print, the possibility of upside remains as more pressure is removed from the Yen, and the pair can get back to the prior bullish trend.