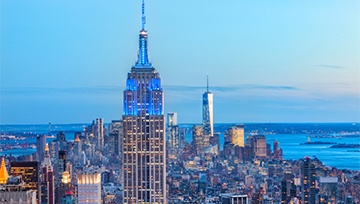 - Both the S&P 500 and GBP/USD have posted bullish breakouts, and each of these markets will be in the spotlight in the coming days as tomorrow brings UK inflation numbers for the month of March while US markets focus on Q1 earnings.

- The US Dollar sold-off to fresh April lows during the Asian session, and a bit of support started to show around the European open. The two-month range still applies around the Dollar, and EUR/USD may have a deeper pullback as that range also looks to continue. Of interest around FX is the prospect of continuation in Yen-weakness, as April has shown a reversal of the strength that was so prominent in Q1 of this year.

We’re moving deeper into earnings season in the United States, and US equities are on the move.

Over the past month there’s been a build of resistance in the S&P 500, and this has taken place while buyers have been coming-in to produce support a series of higher-lows. This was an ascending wedge pattern, and it finally began to move towards resolution yesterday when prices traded through the level of 2677. This is the 23.6% retracement of the post-Election move in the S&P 500, and this is from the same Fibonacci study with a 38.2% retracement that helped to catch the April low.

The next big level of interest in the S&P 500 is at 2703. This is the 50% retracement of the February sell-off, and this level had helped to provide support in mid-March, just ahead of the Federal Reserve’s rate hike. As that rate hike came in, equity prices tilted lower to produce a bearish breakout, and we haven’t been back to 2700 since.

Given that this rally is taking place as we move deeper into earnings, the rationale for the move makes sense. This can also provide a backdrop of continued volatility, and if we are able to successfully trade through the 2700 level today, the door is opened for re-tests of prior points of support/resistance at 2724 and 2744.

Pin Bar in the British Pound Highlights Pull Back Potential

We’ve been following the bullish move in the British Pound over the past month, and that theme has really been heating up over the past couple of weeks as Cable has rallied for each of the past seven days; eventually setting a fresh post-Brexit high earlier this morning. And tomorrow brings UK inflation numbers for the month of March, so there’s a very requisite motivator to the long side of the setup.

But after that fresh post-Brexit high was set this morning, bulls quickly lost motivation and prices started to pull back. At the top of this move is a bearish pin bar formation, denoted by an elongated wick ‘sticking out’ from prior price action.

This trend has become red-hot over in April, and for those looking to take on bullish exposure, that bearish pin bar can be helpful as it may be preluding a pullback in the pair. And keep in mind – UK inflation could produce a bearish drive in the British Pound, as its far from a foregone conclusion that that data point will elicit a move of strength in the currency.

This highlights a series of potential support levels above the 1.4000 area that we started investigating this theme around, and each of these can be used by traders based on how aggressively they want to trade for continuation. For those looking at an aggressive stance, higher-low support at 1.4285 or 1.4245 can be workable. For those looking to move forward a bit more conservatively, a deeper level such as 1.4145 or even the 1.4088 area could become operable. And if we do make it back to 1.4000, the bullish trend would come into question as we’d have a fairly large failure after a test of fresh highs.

The US Dollar has started to bounce after the European open, and this comes after the currency drove down to a fresh April low in the Asian session, continuing the theme of short-term weakness that we looked at yesterday. There is little macroeconomic data coming out around the US Dollar this week, as focus in the US will largely be paid towards earnings reports from last quarter, and this keeps the Greenback in the passenger seat as prevailing trends in the Euro, British Pound and Japanese Yen can push USD in either direction.

The big question here is one of potential. While this near-term trend is pointing-lower, much as the longer-term trend has been doing over the past year; intermediate-term price action in the Greenback remains in a range and prices are catching a bit of support off of the ‘s1’ level that we had looked at yesterday.

Prices testing through the ‘s1’ support level opens the door for a test of ‘s2’ around the price of 89.00 on DXY.

The One to Watch Today: USD/JPY

Transition states between trends can be challenging environments to trade. Very rarely do we see one trend just swap into another without so much as a bit of congestion in between; and its these transitory states that can make getting on the side of the new trend so incredibly difficult.

Over the past month, we’ve been watching this transition in USD/JPY, where a previously bearish theme that dominated the pair’s Q1 behavior has started to pull back in April. This led to an eventual break of a bearish short-term channel, and we’ve even started to see support showing around prior points of resistance; with two separate instances of ‘higher-low’ support showing around 106.61 last week.

The complication in this setup has come from the lack of enthusiasm after bulls grasped control. We’ve seen a fairly pronounced response at that support last week but, to date, we haven’t seen a test through the swing-high at 107.90. Last week’s lower-high has led into a fairly consistent pullback, and this brought prices all the way back-below 107.00, at which point a bit of support began to show around this morning’s European open.

Is this going to function as a higher-low above last week’s double-bottom around 106.61? Or – is this merely a speed bump as prices are moving-lower for another test of that support?

One of the drawbacks of the above setup is the prospect of bullish exposure in USD. Sure, the case can be made that the Dollar’s down-trend is oversold; but trading USD/JPY as the Yen is going through some element of transition is like juggling two very pensive and ‘fluid’ themes at the same time.

More proactive could be looking to trade that Yen-weakness elsewhere, such as we’ve been following in GBP/JPY or EUR/JPY.