S&P Bounces From Fibonacci Support, US Dollar Clings to 90.00 to Begin Q2

- Q2 started with a bang across equity markets as yesterday saw another bearish drive show-up in the S&P 500. A bit of support came-in around the 38.2% retracement of the post-Election move before the US close yesterday, and the S&P 500 has bounced up to find a bit of short-term resistance around an area of prior support.

- The US Dollar continues to cling to the 90.00 level in DXY, and this keeps the door open for a number of interesting scenarios on both sides of the Greenback. On the short-side of USD are setups in both EUR/USD and USD/JPY that can remain interesting in the near-term, and we look at each below.

US Stocks Start Q2 on a Rough Note

Yesterday’s open was not friendly to US equities, as a quick dip to start Q2 ran for the first part of the trading day. The S&P 500 made a fast approach towards the February double-bottom at 2,530; but a bit of support showed up around 2,550 ahead of the close with prices rallying-up to lower-high resistance. Price action in US equity futures has remained largely stable in the overnight session and prices are holding on to yesterday’s support approach this morning’s open.

S&P 500 Four-Hour Chart: Pull Back to Find Resistance Around Prior Short-Term Support 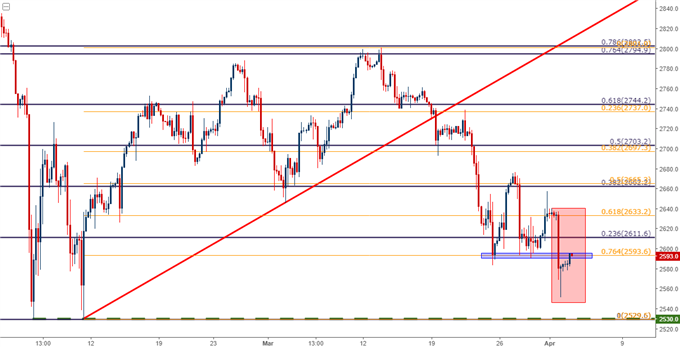 At this point, prices have rallied back to the 76.4% retracement of bullish move off of the February lows; and this is an area that had previously helped to cauterize some support during last week’s sell-off. Resistance showing around prior support keeps US stocks in a bearish state as we move into the month of April, and the stage appears set for a retest of 2,530. And if that support can’t hold up after a third test, the bearish drive could grow considerably larger. 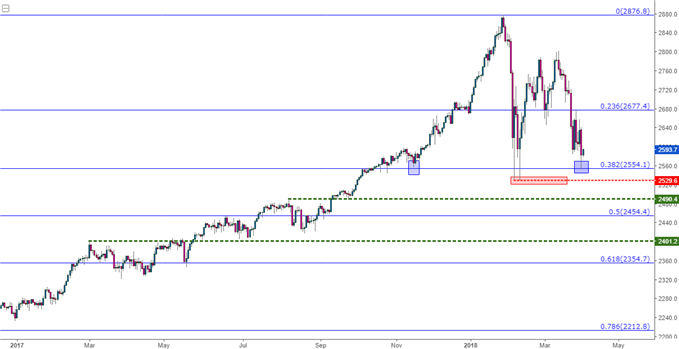 This week’s economic calendar has two bright spots of volatility on the docket, with Euro-Zone CPI set to be released tomorrow with Non-Farm Payrolls on the docket for Friday. We also get Canadian Jobs numbers on Friday morning, setting up USD/CAD for an especially volatile backdrop around the pair.

NFP could be especially pensive given the cross-market reactions after last month’s FOMC rate decision.

It’s been a rather slow start to the quarter given that many markets remained closed yesterday in observance of Easter. And to open this week, the US Dollar very much looks like it’s been trading through a holiday, as yesterday gave us a doji near the 90.00 level on DXY and today’s bar, at least so far, is showing more of the same.

To close Q1, we looked at the bigger picture setup behind the Greenback and this exposes a key level around 88.42. This is the 61.8% retracement of the 2014-2017 move in DXY, and this level helped to carve-out support after tests in both January and February. The 50% retracement of that same Fibonacci study had previously helped to mark the 2017 low after a test in September of last year, and that led to two months of strength before Dollar bears were back in control.

The big difference in the January/February test of the 61.8% level was the fact that bears remained fairly active here, continuing to sell on tests of resistance. This indicates that the Dollar’s bearish drive may not yet be over. 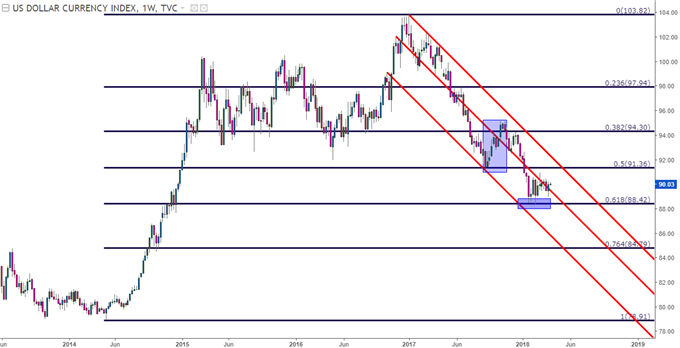 On a shorter-term basis, we can see where the area between 90 and 91.01 in DXY has been a difficult place on the chart for USD-bulls. The level of 91.01 was the 2017 low, and this was taken out by the January sell-off in DXY. But since then, bulls have been unable to make much ground as tests above 90.00 were met with more sellers. 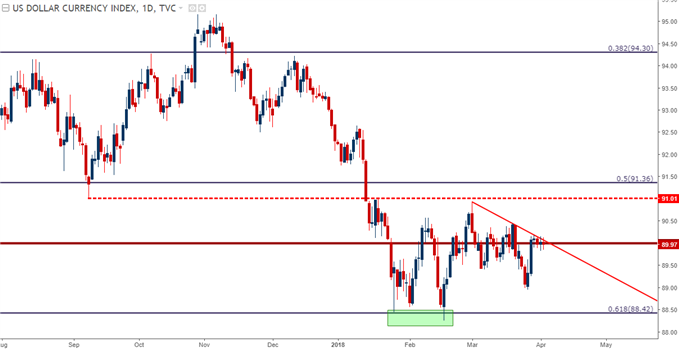 EUR/USD Sitting on Support Around 1.2300

With DXY testing a familiar level of resistance at 90.00, we also have EUR/USD testing a familiar level of support at 1.2300. We discussed this setup on a couple of different occasions as we wound down Q1, and the longer-term setup very much remains with the 2017 bullish trend-line riding underneath current price action. For those that are looking at plays of USD-weakness, the topside of EUR/USD will likely remain as one of the more attractive venues for such a theme. 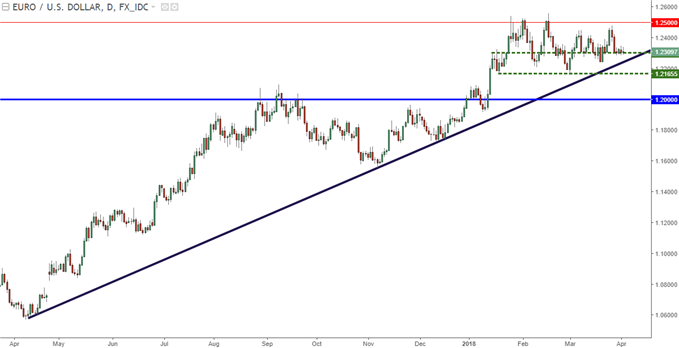 On the four-hour chart below, we’re focusing-in on EUR/USD price action in 2018, which has been largely range-bound after the bullish burst to start the New Year.

EUR/USD Four-Hour Chart: Range-Bound for Much of 2018 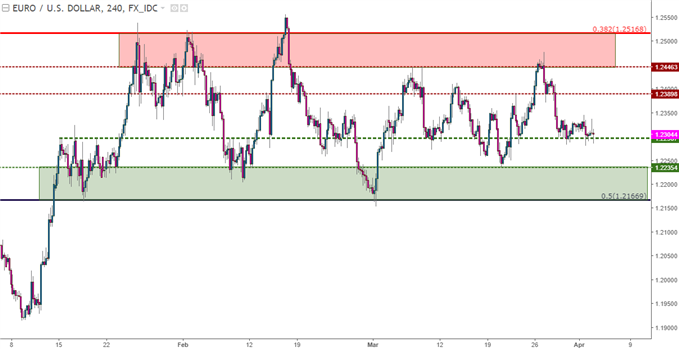 We’ve been following USD/JPY in the latter-half of Q1 after some longer-term levels of support have started to come into play, and for the past couple of months, price action has oscillated around these levels with a bearish overall bias. On the weekly chart below, we’re focusing-in on the support side of a symmetrical wedge that started to give way in February and March, and is currently helping to set short-term resistance.

USD/JPY Weekly Chart: Support Side of Symmetrical Wedge Starts to Give Way in Q1 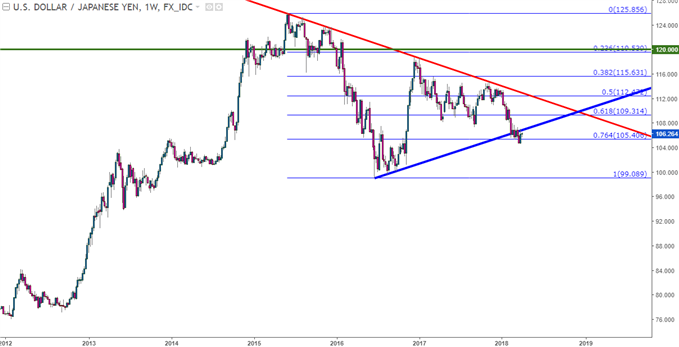 On the four-hour chart below, we’ve kept that longer-term trend-line in blue, and we’ve added a shorter-term bearish channel in Orange. This highlights how the break of that longer-term support could still be in process as February/March have led to a series of lower-lows and lower-highs in the pair. 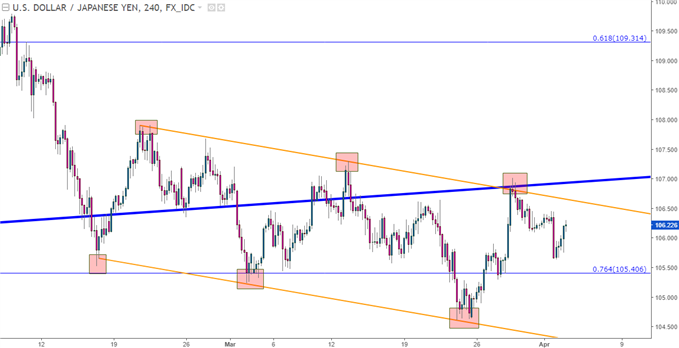