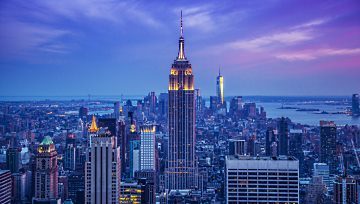 - The big item across global markets is tomorrow’s FOMC rate decision, in which a hike appears to be almost a foregone conclusion at this point with probabilities hovering at around 94.4% (via CME Fedwatch). More pressing is whether the Fed thinks they can get four full hikes through this year, as was alluded to by Mr. Jerome Powell at his Humphrey Hawkins testimony a few weeks ago.

- Mr. Powell’s first major appearance at that Humphrey Hawkins testimony produced some interesting moves, key of which was weakness in US equities. That reaction was complicated by the ‘tariff announcement’ that came-out shortly after he finished speaking on day two, but that appeared to wipe out Powell-fueled gains in the Greenback as the general trend of USD-weakness continued into the next week.

If you’re looking for short-term indicators on around the US Dollar, check out our IG Client Sentiment Indicator.

Tomorrow is all about the Fed. The rate decision is announced at 2PM ET, and the accompanying press conference begins thirty minutes later. This will be new Fed Chair Jerome Powell’s first rate decision atop the bank, and in many ways, this will be markets’ first opportunity to see Mr. Powell in action. While he did have a public appearance earlier this month with the Fed’s Humphrey Hawkins, his testimony was perhaps a bit obscured by the topic of tariffs that dominated the headlines later that week.

The net takeaway from Mr. Powell’s first appearance was US Dollar strength to go along with equity weakness. The S&P 500 started a bearish reversal right as Mr. Powell began speaking on the first day of that testimony, and the sell-off continued through the week. The US Dollar, on the other hand, caught a quick pop of strength around day one, and that strength continued until he finished speaking on day two. But the tariff announcement that came out shortly after Mr. Powell had finished his testimony reversed that strength, and sent the US Dollar in a tailspin that didn’t begin to slow until support showed around 89.50 on the following Tuesday.

On the below chart, we can see that three-day sequence in action. In blue, we have the top-side run in the Dollar that began around Mr. Powell’s first day of testimony. And that ran all the way through his second day of testimony on Thursday, at which point the announcement of tariffs on Chinese steel stole the headlines, and a reversal punched the Greenback right back to where it was before Mr. Powell started speaking.

US Dollar via ‘DXY’ Four-Hour Chart: US Dollar Pops on Powell, Reverses on Tariffs 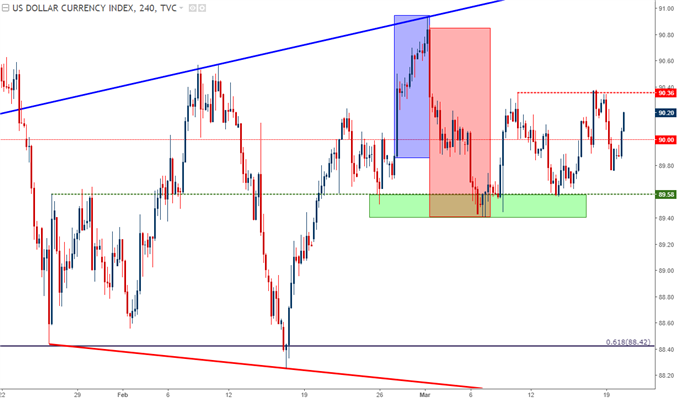 The move in US equities was a bit more pronounced, and perhaps even a bit cleaner as the pressure started around the time Mr. Powell got started and didn’t let up until we neared the Friday close. 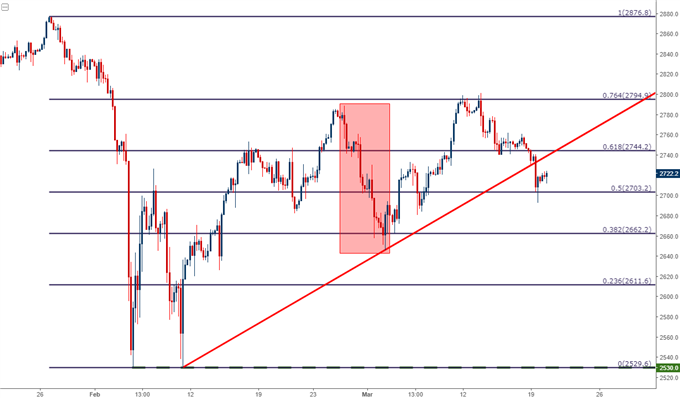 As you can see from the above chart, a bit of pressure has started to show again ahead of tomorrow’s FOMC rate decision. Equities sold-off in throughout yesterday’s session, catching a bit of support around 2700 as we neared yesterday’s US close. That support has largely held so far, but this may not be the dip that equity traders want to chase as we have the potential for some lower-high resistance inside of the 2750 area on the chart.

This can open the door for short-term bearish strategies or, for those that are looking to re-engage a bullish stance with US stocks, these levels can offer barriers to re-open the door for topside plays. 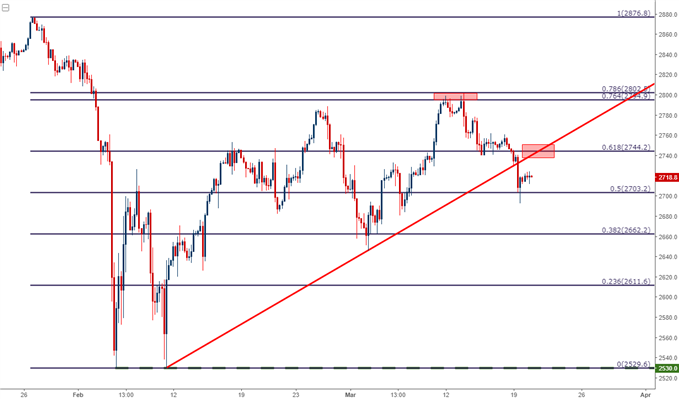 The US Dollar As We Near the Fed

The item that really appeared to grasp the attention of market participants’ from Mr. Powell’s first appearance earlier this month was the prospect of four rate hikes. Tomorrow’s rate hike is likely well-baked in the cake at this point, and the attention will be on whether or not the Fed thinks we’ll get three or four hikes in the remainder of this year. That means: Watch the dot plot matrix, as this will likely end up being the key driver around tomorrow’s Fed meeting, notwithstanding any potential surprises that might avail themselves in the press conference.

The backdrop around the US Dollar is rather complicated at the moment, as there appears to be dueling themes of both a monetary and a fiscal variety. On the monetary front: The Fed is hawkish and they want to hike more to keep the US economy from ‘overheating’. This is something that’s normally a positive for a currency, as market participants follow the higher rates and this, in general, drive currency flows.

The only problem with that scenario is that it hasn’t really been happening. While the US Dollar is one of the only games in town for rate hikes (amongst large Central Banks, at least), as has been the case for the past couple of years, the Greenback remains in the midst of a significant strain of weakness. That weakness started last year and has seen as much as 15% of the value of the US Dollar erased; and this was perhaps explainable when taken into account with the Dollar-strength that had showed from 2014-2017. 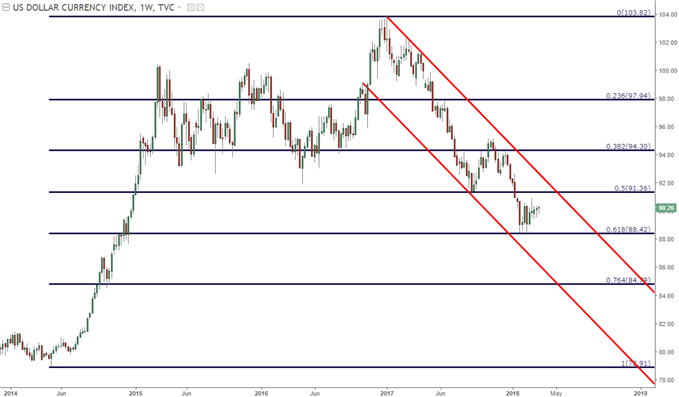 But, as we’ve moved deeper into 2018, that plot has begun to thicken as we’ve also seen some significant moves in US Treasuries, with yields on the 10-year spiking from a December close of 2.4% to as high as 2.94%. Sure, this is just a half a percent; but when taken into account with the size of the US Treasury market, and also taken with the concept of ‘convexity’, or the principal movement in a bond for a given movement in rates - and this is a huge move.

This weakness in US Treasuries is likely related to the persistent weakness that continues to drive the US Dollar on a longer-term basis. This likely relates back to a conundrum of a fiscal variety that we’ll be seeing over the next few years as the US Government raises funds to pay for spending initiatives and tax cuts; and if you’re a bond trader, this is a simple prospect of supply and demand: More treasuries (supply) with even less demand (no more Fed QE, and now we have QT). Combine this with a rising rate environment in which the Fed is looking to further normalize policy, and the environment is downright daunting for bond traders. Why hold US paper when the US government itself is on the other side of the trade, furnishing more supply and even less demand while also hiking rates? There are simply greener pastures elsewhere, or across the Atlantic, where Central Banks are still actively supporting bond markets.

This helps to explain why the US Dollar has continued to be so incredibly weak even as the Fed continues to tighten policy. This also shows how fiscal forces may not exactly be on the same side of Dollar-bulls, at least for long; and any strength developing throughout this year could be a volley to resistance so that the Greenback can be sold again.

As we approach tomorrow’s FOMC rate decision, the US Dollar remains in an expanding wedge, sometimes called a ‘megaphone pattern’. These will often show-up ahead of a big move, although they’re non-directional formations, so there’s no way of predicting which side prices will break. On the chart below, we’re looking at three different resistance levels inside of the 2018 high in the US Dollar, each of which could open the door for short-side USD strategies, in currencies such as EUR/USD or GBP/USD. If we do break above the 92.64 level that’s currently serving as the 2018

US Dollar via ‘DXY’ Eight-Hour Chart: Potential Resistance Levels Inside of 2018 High 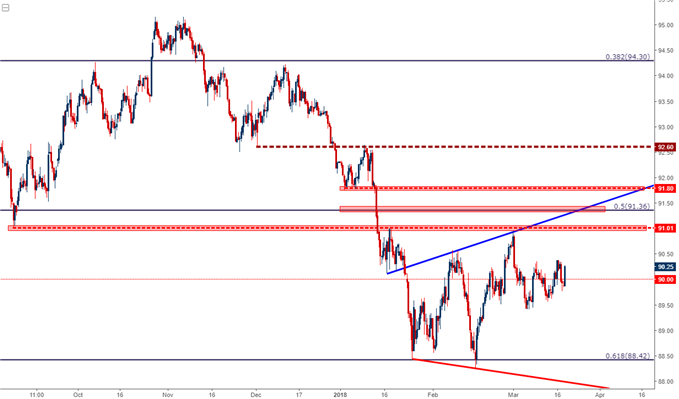