US Dollar Prints Bull Pennant Ahead of Powell, US Data

- The US Dollar is nearing the end of what’s been a really strong week, coming on the heels of last week’s sell-off that produced a fresh three-year low on Thursday night. But after that low, a bullish engulfing candlestick showed-up on Friday’s price action, and that strength has continued throughout this week. After yesterday’s pullback in USD, a bull pennant formation has started to form near the resistance level of 90.00 on DXY.

- Next week’s economic calendar brings a heavy US focus with Mr. Jerome Powell’s first appearance of note on Wednesday and Thursday as he delivers his first semiannual monetary policy report to Congress (dubbed ‘Humphrey Hawkins testimony’).

Next Week’s Economic Calendar with Heavy US Focus

Next week brings a number of US drivers to the table, with the expected highlight being the first appearance of note for incoming Fed President, Jerome Powell. On Wednesday, Mr. Powell walks up Capitol Hill to begin his first semiannual monetary policy report to Congress, dubbed ‘Humphrey Hawkins testimony.’ On Wednesday, Mr. Powell speaks with the House Financial Services Committee, and on Thursday he testifies in front of the Senate Banking Committee. Each of these will begin with prepared remarks, after which the floor is opened for questions and these can range from income inequality to Fed policy to global warming. 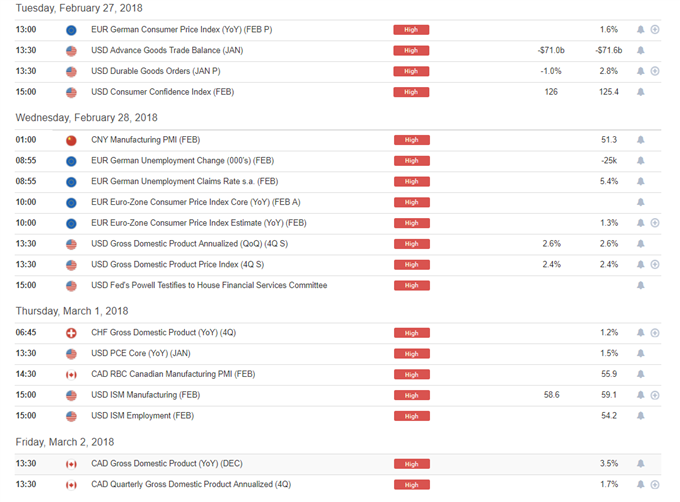 In recent years past, this Humphrey Hawkins testimony has had a tendency to be down-played, as the Fed has largely executed their strategies around rate decisions and accompanying press conferences. The notable exception being February of 2016, when Fed Chair Janet Yellen spoke in-front of Congress as global markets were in a state of disarray. On the first day of her testimony, she was directly asked what the Fed might do with negative rates if the sell-offs at the time worsened: Chair Yellen responded that the Fed wasn’t even sure if negative rates were ‘legal’ for the bank. This did little to pacify markets, and the sell-off continued throughout the day. But – on day 2 of that testimony, Chair Yellen gave a far different answer to that very same question, responding that the Fed ‘wasn’t going to take any policy options off of the table.’ This, markets liked, and in short-order, the bullish train in US stocks had picked right back up where it had left off.

Given that this is Mr. Powell’s first public appearance of note since taking the reins of the Fed at the beginning of this month, this speech will likely be watched for clues or hints towards how the Fed might look to implement policy moving-forward.

US Dollar Gearing Up

Ahead of next week’s US data outlay, the Greenback has exhibited a bit of congestion around a key level of resistance. The price of 90.00 on DXY helped to reverse a bullish advance last week around the US inflation print; and buyers pushed the Greenback above this level earlier this week after the release of FOMC minutes from the bank’s January meeting. And while there was a brief amount of support in the overnight session ahead of yesterday’s open, buyers were unable to hold the line and prices pulled back to the support area we were looking at around 89.60, and so far this level has held. A higher-low printing thereafter, coupled with a set of lower-highs that’s started to show on the hourly produce the net of a short-term symmetrical wedge pattern. 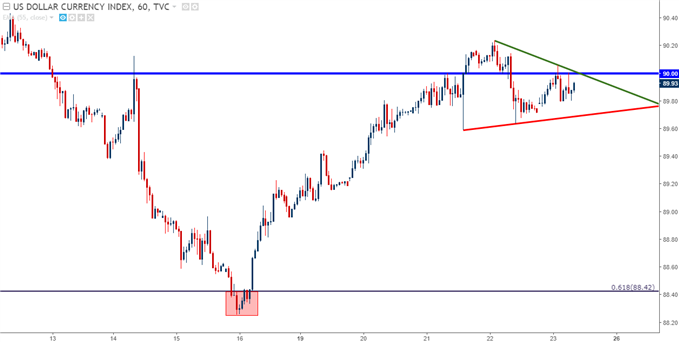 The wedge forming near resistance after a strong week in the Greenback comes after last Friday printed a bullish engulfing candlestick on the daily chart of DXY. Engulfing setups are fantastic for continuation, and that’s largely what we’ve seen play out this week. But – this leads into another setup of interest, combining that prior bullish trend with the short-term wedge showing near the top of the move, and that’s a bull pennant formation. A bull pennant formation, like a bull flag, is often traded as a continuation pattern, and this would point to the possibility of continued USD-gains as we move towards next week.

For traders looking to take a bullish stance, a break above the swing-high at 90.06 would offer a bullish move above the shorter-term wedge, opening the door for topside exposure in the Greenback. 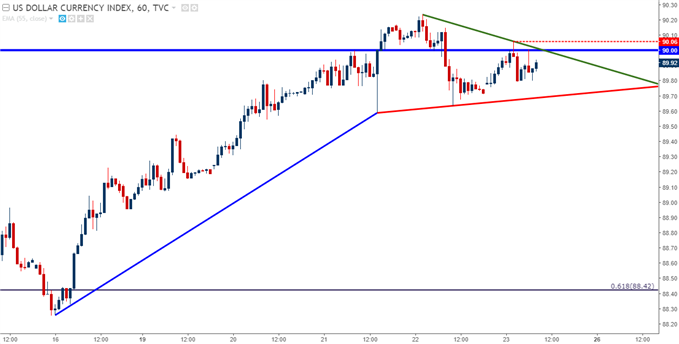 Despite the bullish indications that may be showing in the Greenback as we move into a week that’s heavy with US data, traders will likely want to move forward with some element of a balanced approach, as the longer-term trend still remains bearish in nature. As we discussed yesterday, topside breaks in DXY above 90.50 and 91.00 could make the prospect of a bigger move in the Dollar seem more probabilistic; but until that happens, some element of balance will likely be warranted.

For short-side USD strategies, there have been a few pairs of note that could remain interesting as we move into next week. The pair that we’ve been following for such has been USD/CHF, and this week’s rip in the Dollar helped to fill-in a bearish setup in the pair. An analyst pick was set on USD/CHF on Wednesday shortly after the release of FOMC minutes, and by the next morning prices in the pair had already moved-down to set a fresh lower-low. At this point, price action in USD/CHF is retracing a portion of those losses, and this opens the door to another iteration of lower-high resistance should some sellers show-up ahead of the prior swing-high at .9409. 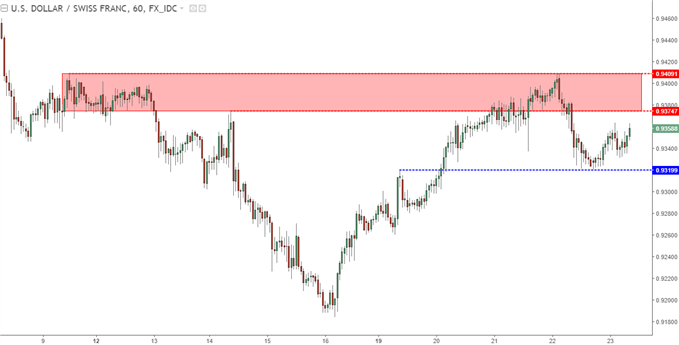 On the other side of the Dollar, we’ve been watching AUD/USD for long-USD exposure. The pair started to reverse in later-January, before the Dollar started to show much sign of life. But, as the Dollar woke up in early February, sellers had their way with AUD/USD and this created a fairly consistent bearish move in the pair. Yesterday’s pullback in USD helped AUD/USD firm-up to an area of resistance around .7850, and since then we’ve seen bears push prices lower. If we do see that bull pennant in USD fill-in, leading to breaks in DXY of the 90.50 and 91.00 levels, this could bring a deeper bearish move to Aussie that may bring back into play the prior area of support around .7500. 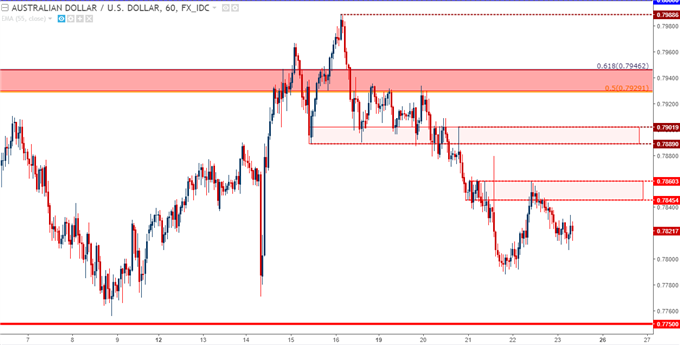 The bullish advance in EUR/USD does not look attractive for topside setups despite the fact that support continues to hold around the ‘s2’ zone that we’ve been following. The issue would rest with the fact that bulls have been unable to muster much excitement on tests of prior highs, and bears have been putting in a sequence of lower-lows that indicates a deeper retracement may be on the horizon before the longer-term bullish trend might be ready for continuation. At this stage, it would appear that a re-test of the 1.2213 area of support may be in the cards; and if that support cannot hold, look for a deeper move towards the Fibonacci level at 1.2167.

EUR/USD Hourly Chart: Despite Support, Bulls Unable to Muster Much of an Advance 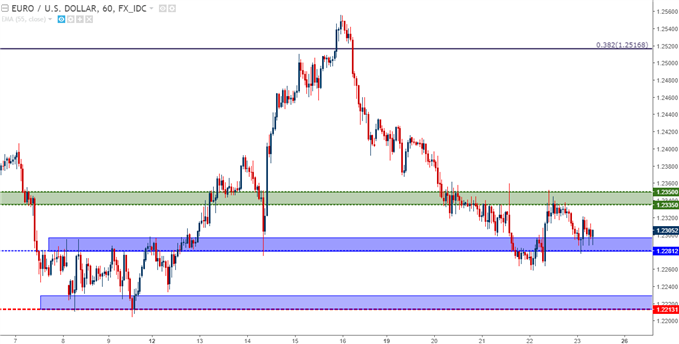 US Stocks in the Spotlight

Given that we’re going to be seeing the Fed Chair testify in-front of Congress shortly after a pickup in volatility raised some red flags across markets, and logically we will see the topic of equity performance come-up. Many have already referred to the ‘Powell Put,’ which refers to all of the ‘Greenspan Put,’ the ‘Bernanke Put’ and the ‘Yellen Put.’ This is the implication that Fed Chairs are sensitive to market sell-offs, often altering stances of opinions on long-term matters based on short-term volatility.

Well, earlier in the month we saw a pickup in short-term volatility, so this is likely something Mr. Powell will be questioned about. The matter in which he responds, just as we saw from Janet Yellen in February of 2016, will likely have a big impact on near-term market dynamics, and the S&P 500 has spent most of this week range-bound after last week’s recovery from the early-month sell-off. One way or the other, this range will likely give way next week. 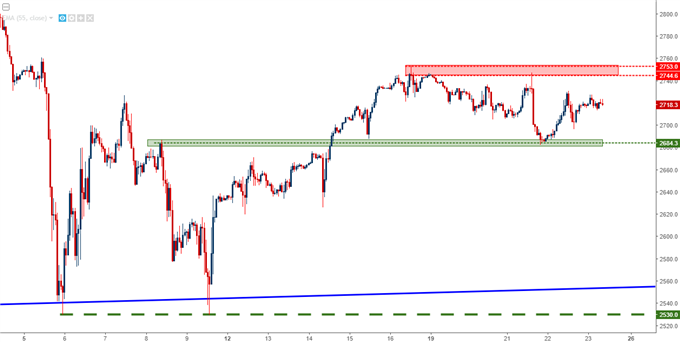