U.S. Dollar Claws Back, EUR/USD Retraces Ahead of Big Week of US Data

- This week’s calendar is loaded with data, with high-impact US prints each day of the week.

- The U.S. Dollar sold-off to fresh three-year lows last week on comments from U.S. Treasury Secretary Steven Mnuchin. Since a clarification/rebuttal of those comments were offered from President Trump, the U.S. Dollar has started to claw back, although that move still looks corrective in nature at this point.

Last week saw another extension in the sell-off that started in the U.S. Dollar in the first week of last year. And while that trend remained rather smooth in southbound direction for the first nine months of 2017, a bit of support had started to show in Q4 as we moved towards year-end, giving rise to the idea that a move of strength might transpire, even if only temporary, as shorts closed up positions while taking off risk in key areas like the topside of EUR/USD or GBP/USD.

That never really happened. We did get a bit of a pullback in October and the first half of November, but sellers came-back rather quickly and soon punched the Greenback down towards those three year lows as we moved to close out 2017. And once 2018 opened-up, the selling really got underway, marked by last week’s aggressively bearish move on the heels of some comments from U.S. Treasury Secretary, Mr. Steven Mnuchin. This brought the U.S. Dollar down towards a key area of support, the 61.8% retracement of the 2014-2017 bullish move, which started to show on Friday. As we open this week, the Dollar is continuing to claw back recent losses as a big week of economic data is on the calendar, with high-impact U.S. economic items being released every day of this week. 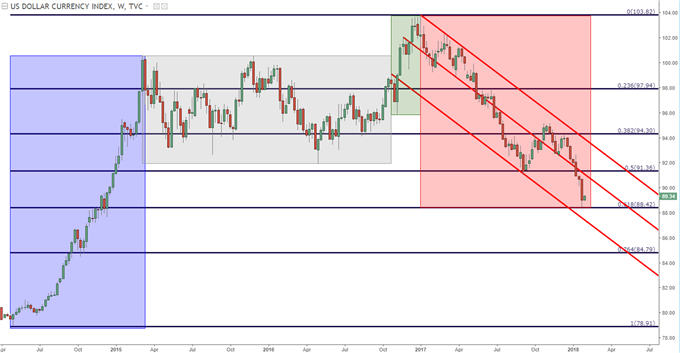 This rally off of the lows still appears corrective in nature, with potential resistance at 89.50, around last week’s swing high, followed by the psychological level of 90.00. 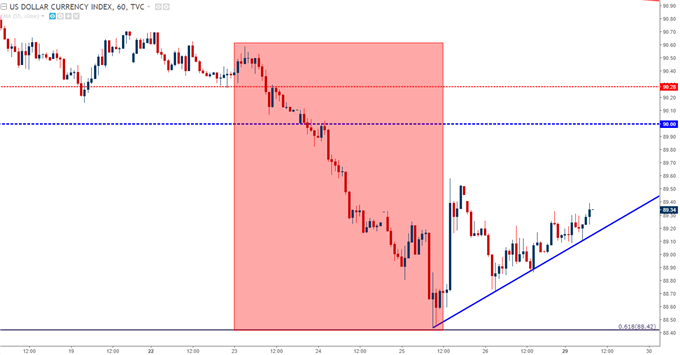 Below, we’re looking at this week’s high-impact data prints taken from the DailyFX economic calendar. Notice the heavy emphasis on US data, but also some key European prints on Tuesday and Wednesday, along with Australian CPI tomorrow night (Wednesday morning in Australia, Asia). On the U.S. front – the FOMC rate decision on Wednesday brings a very small probability of any actual moves, with markets continuing to carry a sub-5% chance of a hike. The next Fed decision in March should be considerably more interesting, as this will be Mr. Jerome Powell’s first as the head of the bank, along with the fact that there’s currently a 78% chance of an interest rate hike. 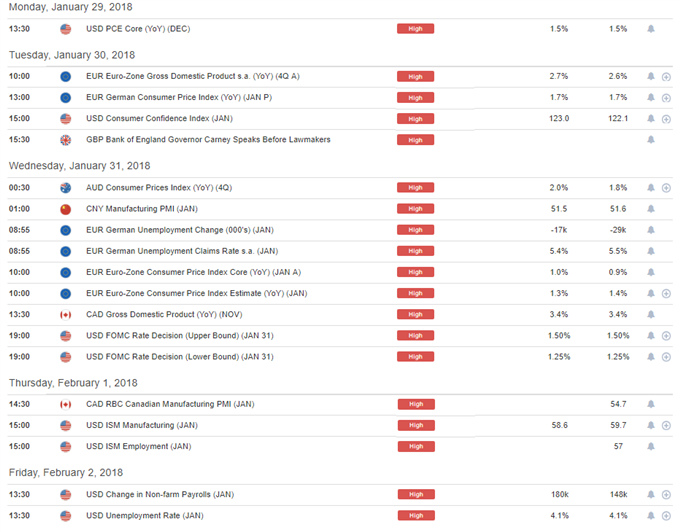 Going along with last week’s exuberant sell-off in the U.S. Dollar was a bullish surge in the Euro. Much of this took place leading into last week’s ECB rate decision, with a hastening of the move showing around the event. This helped to drive EUR/USD up to fresh three-year highs, which would be the highest level seen in the pair since the ECB QE program actually got started in March of 2015. Price action in EUR/USD ran into a key Fibonacci level on Thursday, and has since been unable to trade-higher. This is the 38.2% retracement of the 2008-2017 bearish move in EUR/USD, and is confluent with the 1.2500 psychological level in the pair. This may be a difficult area of resistance to overcome at the current juncture given the stretched nature of the move; for traders harboring a bullish stance, a retracement or deeper pullback may be in order before adding exposure becomes attractive again. 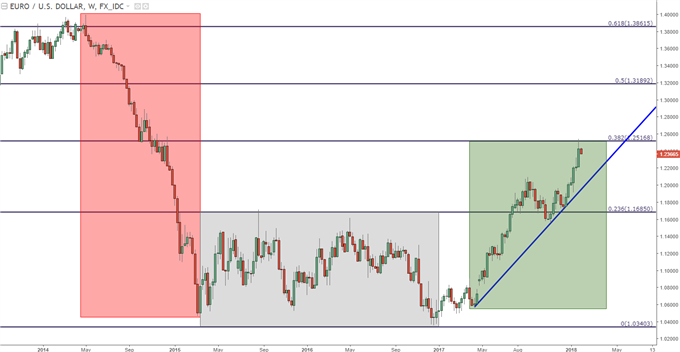 The big question surrounding EUR/USD for this week is just how excited bulls might be to continue this trend. The past three weeks have brought a considerable hastening in what was already a stretched move, and on longer-term charts, we remain rather far away from any nearby areas of support. On the Daily chart below, we’re looking at three potential areas of support above the psychological level at 1.2000, with key emphasis on 1.2167, which is the 50% retracement of the bearish ECB QE move (May 2014-January 2017), as well as helping to set a swing-low just two weeks ago. 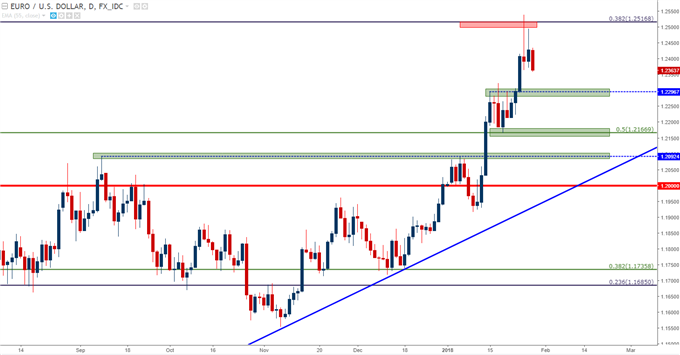 Are you looking for longer-term analysis on Euro, or the U.S. Dollar? Our DailyFX Forecasts for Q1 have a section for each major currency, and we also offer a plethora of resources on our EUR/USD, and U.S. Dollar pages. Traders can also stay up with near-term positioning via our IG Client Sentiment Indicator.