- The Dollar is stretched against many pairs, with IG Client Sentiment showing -2.29 in EUR/USD, -1.99 in GBP/USD.

U.S. Dollar weakness has priced-in with a vengeance over the past week . It was just last Tuesday that we were looking at the Greenback moving up to test a key area of resistance around 92.60, which was the December swing-low that later showed-up as resistance. But, in the week since, the Dollar has put in another extension of that bigger-picture down-trend, and we’ve seen as much as -2.32% taken-out as the Greenback has pushed down to those fresh three-year lows.

We are seeing a bit of a bounce on the morning after buyers began to show yesterday off of the 90.28 low. This keeps the U.S. Dollar in bearish territory, with the prospect of lower-high resistance around the prior zone of support in the region that runs from 91.01 (the 2017 low) up to 91.36, which is the 50% Fibonacci retracement of the 2014-2017 major move in USD. 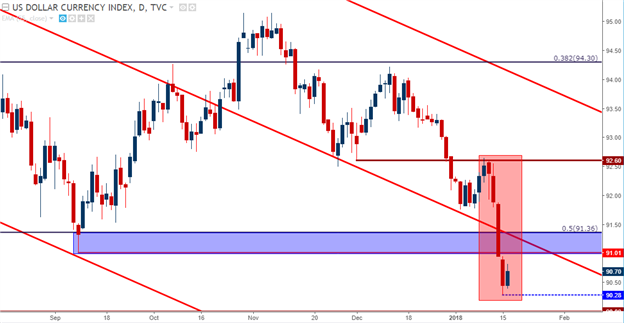 Last week’s downside run also brought DXY into the lower-half of the bearish trend channel that’s dominated the Greenback’s price action over the past year. A continuation-lower exposes potential support at the whole number-level of 90.00, followed by an area around 88.50, with 88.42 being the 61.8% retracement of that same 2014-2017 move looked at above. 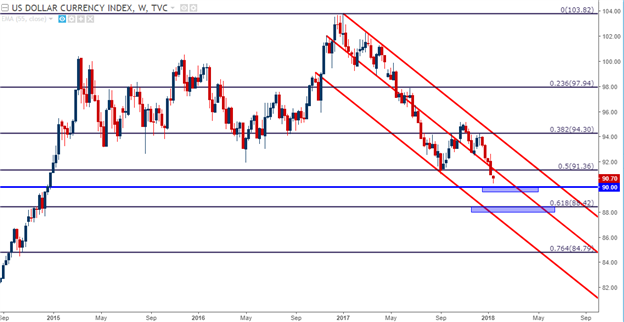 Going along with that drop in the Dollar has been another bullish extension in EUR/USD. The Euro rallied up to a fresh three-year high yesterday, extending a run that started last week and hastened on Friday after the release of US CPI and Advance Retail Sales. So far on the morning, that move is tempering a bit as buyers take profits; but the big question now is where support may show in order for those looking to continue the bullish trend.

On the chart below, we’re looking at three different yet potentially relevant prices for such a purpose. At 1.2092, we have the 2017 high, and this was the price that EUR/USD was unable to take out in the first few trading days of the year, instead printing a lower-high. At 1.2134, we have the 50% retracement of the ‘lifetime move’ in EUR/USD, taking the low from the year 2000 up to the high set in 2008. And at 1.2167, we have the 50% retracement of the 2014-2017 ECB QE inspired move in the pair. Collectively, these prices comprise a zone of ~75 pips that could be an interesting area for support to show at some point this week. 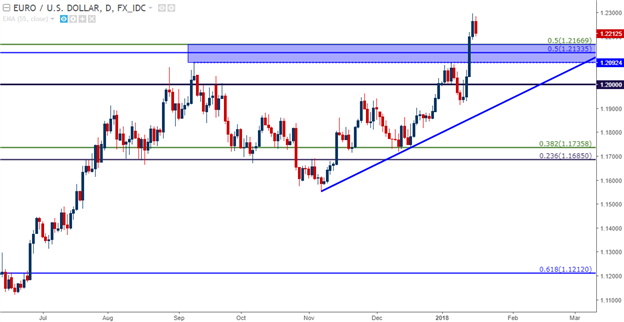 UK Inflation became a rather important data point to currency markets last year. After the Brexit-fueled breakdown in GBP in 2016, last year saw the build-up of inflation until, eventually, the Bank of England had no choice but to raise rates. Nonetheless, the BoE remained rather pessimistic towards future economic conditions, continuing to fear the potential slowdown from Brexit, and this kept Sterling on the defensive as we moved into the close of last year. But as USD-weakness took over again last week, Cable rallied up to a fresh post-Brexit high, finding a bit of resistance around 1.3800.

Earlier this morning, UK inflation for the month of December was released, and this came-out inside of expectations with Core printing at 2.5% versus the 2.7% expected print. This helped to bring a bit of a pullback into GBP/USD after last week’s burst higher, but price action remains in the upper-half of the trend-channel that’s defined the pair’s price action for the past nine months. 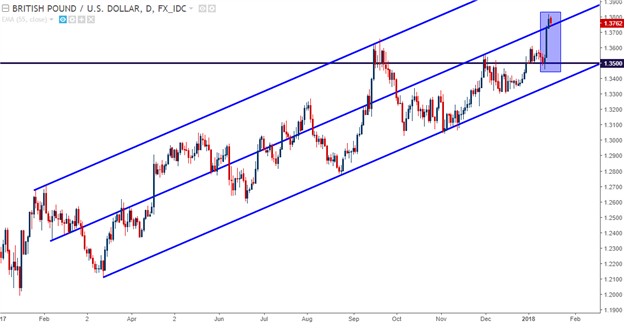 Potential support is a bit messier here than what we looked at above in EUR/USD. The 2017 high at 1.3658 is an interesting spot, and a bit-lower we have another swing-high around 1.3613. If that doesn’t hold, focus will likely shift back towards the major psychological level around 1.3500, much as we had looked at last week. 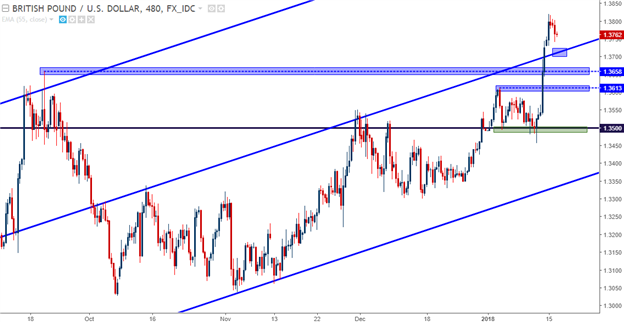