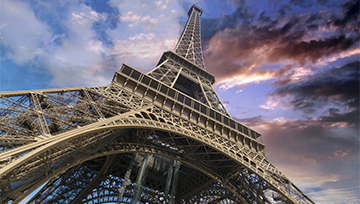 - The U.S. Dollar had an initial bearish reaction to Friday’s NFP report; but has since put in a rally with prices moving up to test last week’s highs. .

- The Dollar is moving higher in the early open of the week, and we have a relatively quiet economic calendar until the latter-portion of this week's calendar. US CPI and Advance Retail Sales are released on Friday.

This week’s economic calendar is back-loaded; with little by way of excitement until we get to Thursday morning, and Friday brings a couple of key US prints with the release of CPI and Retail Sales. Perhaps the most noteworthy item across currency markets as we open this second week of the New Year has been the build of support in the U.S. Dollar. We looked at this on Friday, just after a disappointing NFP release invoked another leg of bearish price action in the Greenback; but that move was short-lived, as buyers came-in around support and just a couple of hours later, we were testing the same area of short-term resistance that had come-in just before the release of NFP. Opening this week, buyers continued to bid USD-higher, and we’re now testing a deeper area of resistance that had shown briefly last week. 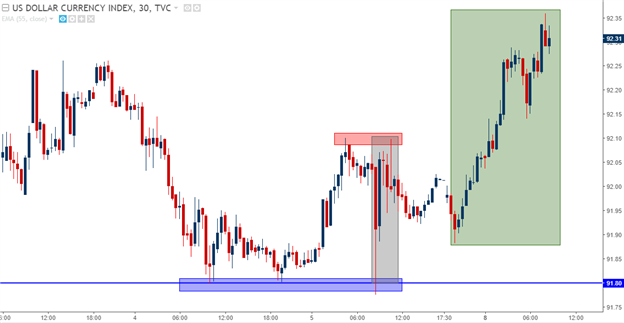 After such a negative open to the New Year after what had been a punishing 2017 for Dollar bulls, there were few expectations for any element of strength in the Greenback. Prices opened the year in a very bearish fashion, breaking below the November swing-low at 92.50. If we do see price action continue this short-term bullish theme, a break back-above that key level opens the door to short-term momentum plays in the U.S. Dollar.

With this continuation of USD-strength, we’ve finally seen EUR/USD test below the psychological level of 1.2000. While the pair is down approximately 110 pips from the high set during NFP, the most disconcerting part is likely the breach of higher-low support that had set in around 1.2000. Below current price action remain a number of potential support targets: Key of which is the area around 1.1940, which was a prior swing-high that syncs up with a very recent albeit quick swing-low. Below that, we have a potential support zone around 1.1837-1.1880, which incorporates a large group of swing-highs from October, November and December. Perhaps most importantly for that zone, this was the most recent ‘higher low’ before bulls took control of the pair in latter-December. If we break below this zone, traders would likely want to put a pause on bullish Euro themes, at least until more confirmed signs of support are seen. 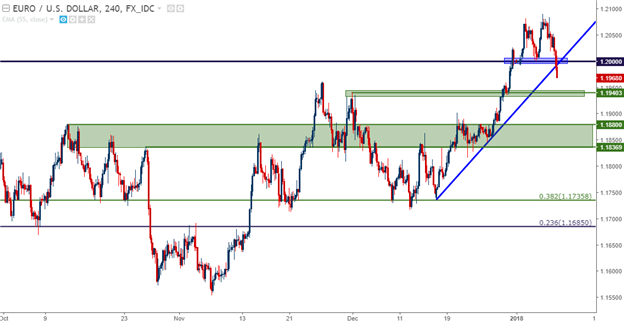 Another key psychological level that’s been in play has been the 1.3500 area in GBP/USD. We had looked at the topside of Cable just before the holidays, and this is when support was showing around 1.3320. A strong burst to finish the year brought the pair up towards 1.3500, and thus far for 2018 we’ve seen Cable continuing to dig out support at or above this level. This keeps the pair interesting for short-USD thesis, particularly in the near-term; and this also opens the door to the possibility of the short-side of EUR/GBP. 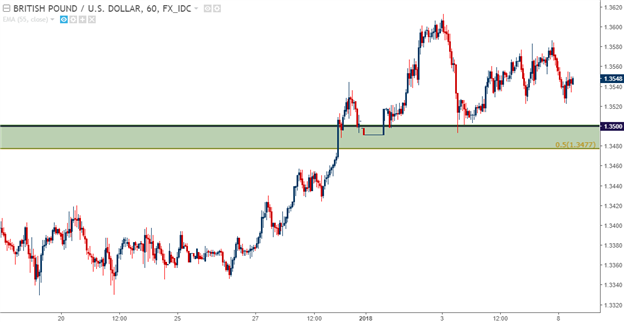 One pair that has not been bashful about showing trends so far in the New Year is USD/CAD. We also had CAD employment numbers released on Friday along with NFP, and the Canadian Jobs report posted a huge beat of the expectation, coming in at +78.6k versus the expectation of +2.0k. This brought a considerable amount of CAD strength to the table that remains as we open a new week. A case of resistance on a revisit towards prior support, around 1.2480-1.2500 could be an interesting item for short-side setups in the pair. This theme of CAD strength could also be extended elsewhere, to areas such as the short-side of EUR/CAD. 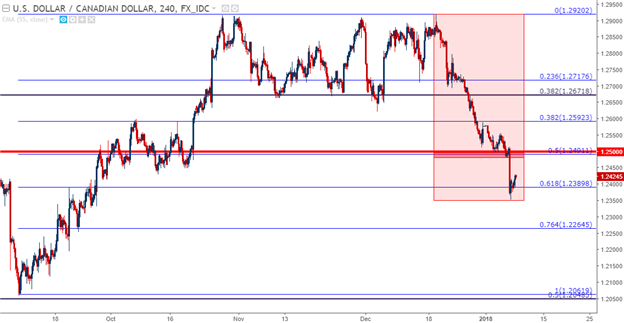