- This week brings a lighter economic docket, and next week marks the Christmas holiday as the end of 2017 nears.

- In this morning’s piece, we take a look at two longer-term themes likely to remain important as we turn the page into 2018, looking into U.S. Dollar weakness and Euro strength.

This week opens with a lighter economic docket than what we’ve seen over the past couple of weeks, and next week brings the Christmas holiday as we move towards year-end. From what we do have on the calendar, it appears as though the primary focus will be on the latter portion of this week. Wednesday afternoon brings New Zealand GDP, and later that evening we hear from the Bank of Japan for their final rate decision of 2017. Thursday morning brings Canadian CPI, and Friday morning brings GDP from Canada along with U.S. Durable Goods and PCE, both released at 8:30 AM ET.

From a price action perspective – one of the more pronounced themes throughout this year caught another shot-in-the-arm last week; as U.S. Dollar bears took-over after another test of resistance. This happened even while the Fed hiked rates again, bringing the total to five rate hikes in the past two years. 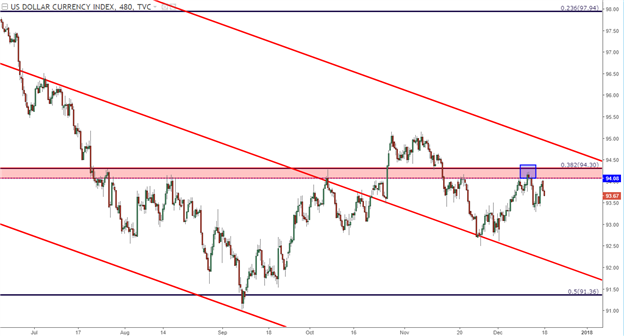 The big question as we move into 2018 is whether this year’s weakness was a correction in a bigger-picture, longer-term theme; or whether this is the start of a chain of weakness that can run into and perhaps even through next year.

On the side of USD-weakness running through next year: We’d basically be looking for European growth to continue to the point where the ECB is able to more aggressively taper stimulus; but this likely wouldn’t take place until the second half of next year as we near the end of the current stimulus program in September. So, we’d basically be looking more for market anticipation than any actual news out of the ECB. This was the big driver in both Euro and U.S. Dollar trends throughout this year, as European growth continued in a rather consistent manner to the point where the bloc appears to have grown faster than that of the U.S. The U.S., meanwhile, has now seen five rate hikes in the past two years, and the ECB remains ‘pedal-to-the-floor’ on the stimulus front. If we are going to see global growth continue in the manner in which we’ve seen in 2017, the ECB may have some catching up to do, and this can equate to further Euro gains next year as markets prepare for a stimulus exit and eventual higher rates out of the ECB.

To illustrate how pertinent this theme was throughout this year: EUR/USD started its bullish run in the first quarter of this year, and this really started to heat up in Q2. This was very much being driven by the potential for the ECB to walk away from stimulus as their program was set to expire in December of 2017; with the prevailing thought being the consistent growth that had been seen in the economy may have afforded the ECB the opportunity to begin slowing bond buys. This kept the Euro strong throughout Q2 and Q3 until, eventually, EUR/USD began to test the 1.2000 psychological level. We finally heard the ECB’s plans in October, when they announced that they were simply going to extend their program into September of next year with a smaller amount of monthly purchases.

This finally broke the bullish trend in EUR/USD; but that weakness only lasted for about two weeks. That’s when a red-hot GDP report came-out of Germany, and this is what showed that Europe is likely going to grow faster than the U.S. this year. In short order, bulls came back into EUR/USD to push prices back-above a key area of support that we’ve been following throughout the year. This runs from 1.1685-1.1736, and this zone has now functioned as support and/or resistance in EUR/USD for the past four-and-a-half months. 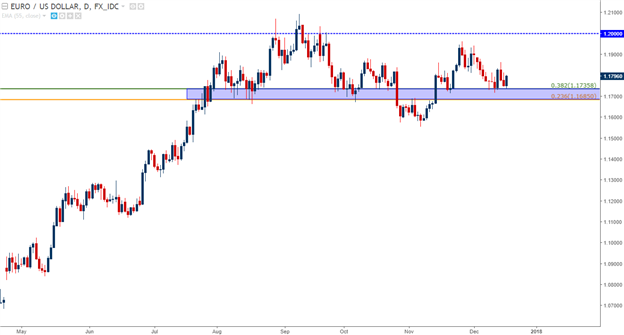 On net, EUR/USD is up 14% on the year, and this comes after the pair had moved-up by as much as 16.9%. Even the most ardent of detractors would have to be impressed, as many forecasts were looking for EUR/USD to test parity at some point this year. This also highlights the longer-term setup, as the pair finally started to recover losses that showed in 2014 around the incoming ECB stimulus program. 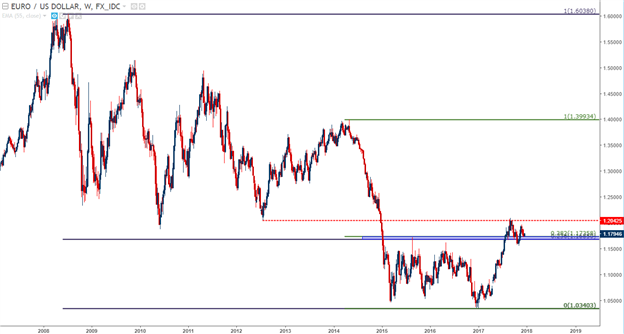 If we do see Euro strength continue into next year, as driven by anticipation for the ECB to step away from stimulus when the current program expires, then we’ll also likely be looking at some element of a weaker U.S. Dollar, and this would amount to a continuation of the bearish trend that started in the first week of trading in 2017. We’re focusing-in on the Dollar’s down-trend throughout this year, and we’ve applied a Fibonacci retracement on the bullish move that started in 2014. We’re currently resisting at the 38.2% retracement after last week’s Doji, and traders looking for this theme to continue would likely be looking for a re-test of the 2017 low around 91.36. 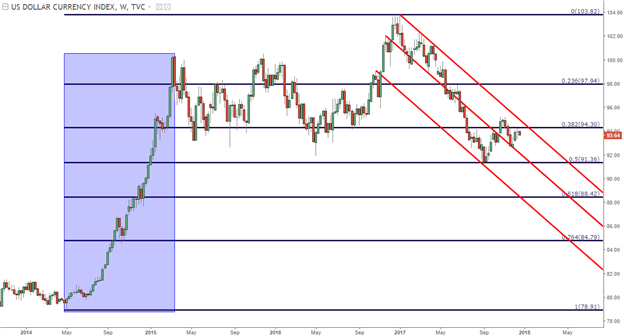 In trading capital markets, it can be really simple to just assume what’s been happening will continue to happen. After all, if we have to pick between ‘something changing,’ or ‘something staying the same,’ the odds will generally favor ‘the same’ along with the status quo. But – we have some very recent examples in both of these themes where that type of thinking was grossly incorrect. The U.S. Dollar was flying high on the ‘reflation trade’ as we came into 2017 and this reversed on just the second trading day of the year. EUR/USD was largely expected to hit parity, as the ECB remained loose and dovish while the Fed was looking to further normalize policy. This not only didn’t happen, but it didn’t even get the side of the trend correct as that low was in place by January 3rd, and the Euro never really looked back.

So, while it might be simple to assume that this year’s USD-weakness is going to continue through 2018, this is far from a foregone conclusion. There’s going to be significant change within the Fed, as we get a new FOMC Chair while watching two of the more dovish voting members move into the background in a non-voting role next year. Oncoming tax cuts in the United States could lead to repatriation of U.S. Dollars from corporations looking to bring their cash holdings back on-shore; and the Fed does continue to say that they’re looking at three full hikes next year while markets remain a bit more skeptical (only 30% probability of three by end of next year, per CME Fedwatch).

So, there’s a case to be made for USD-strength as we move into next year, and this would be supported by the weekly chart of DXY. This year’s bearish move retraced 50% of the prior bullish move that started in 2014. Since that low was set in September, we’ve seen respect of this region, as an area of ‘higher-lows’ have started to develop around 92.50.

If we do see a top-side break of the Q4 high at 95.17, this would also be a bullish break of this year’s bearish trend-channel; which would then start to look like a big bull flag formation that’s finally giving way. A break above 95.17 opens the door for bullish USD strategies. 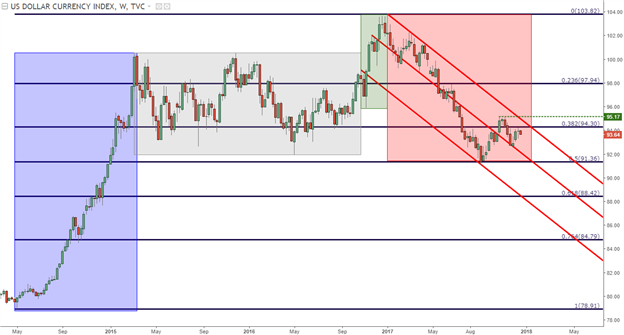