- The wide-expectation is for a hike of 25 basis points; but with that already arguably being priced-in, focus will likely be directed towards the dot-plot matrix to see how many hikes the Fed is looking at for 2018.

Today at 2PM ET brings the Federal Reserve’s final rate decision of 2017. The wide expectation is that we’re going to see a 25 basis point hike, and this has been factored-in for some time now. More pressing, however, will be the bank’s tolerance towards rate hikes in 2018. The current expectation is for three; but if we do see that nudged up to four, which is very feasible given the prospect of oncoming tax cuts in the United States, we may finally see the Dollar exhibit some element of sustainable strength as we move towards year-end.

This has been a brutal year for the U.S. Dollar, and this probably took quite a few by surprise. We came into the year riding the wave of the Trump Trade as USD perched up to fresh 14-year highs. That strength flipped fairly quickly, and by mid-September, the Greenback had already moved-down by as much as 12.3%. Since that low was set on September 8th, we’ve seen Dollar bulls trying to get back in the driver’s seat but, up to this point resistance continues to hold. The zone that runs from 94.08-94.30 continues to offer resistance in DXY, as it has for much of the past three months save a two-week span where it showed as support after ECB in October. 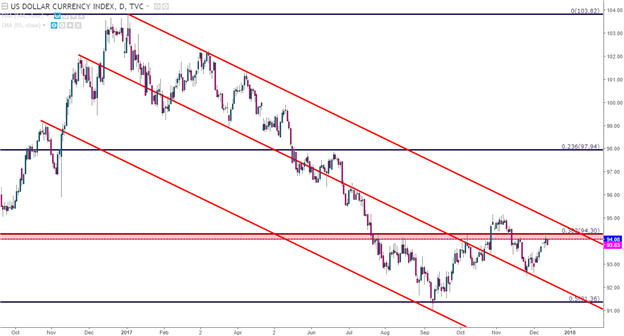 On a shorter-term basis, we’ve seen the Dollar climbing-higher since late-November. Yesterday even produced a quick test within that resistance zone; but sellers soon took over to push prices right back down. Another run towards resistance faltered this morning after a miss on CPI. 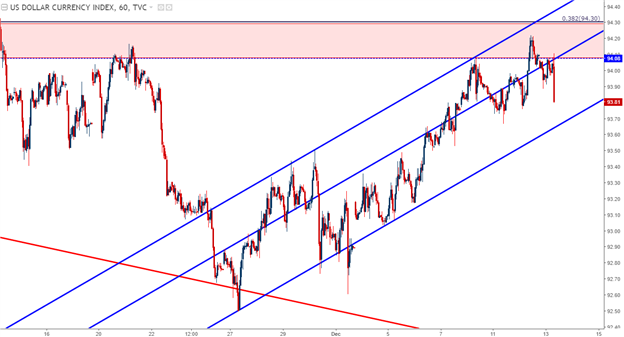 While the U.S. Dollar tests resistance, EUR/USD is testing support. This is also a zone that’s been in play for some time, save for a quick-break around that October ECB meeting. Prices first started to dig-in support around this zone in August. After multiple tests, support held all the way until the October 26 ECB rate decision, which finally brought on a breach. But that was short-lived, as a red-hot German GDP report just a couple of weeks later brought the bulls back into the fray, and prices popped right back above that prior support zone.

To illustrate just how bullish this EUR/USD theme has been this year, we’ve added a Fibonacci retracement over the 2017 up-trend. Notice that we didn’t even see a 38.2% pullback, and the 23.6% retracement of that move syncs fairly well with the bottom portion of our longer-term zone. 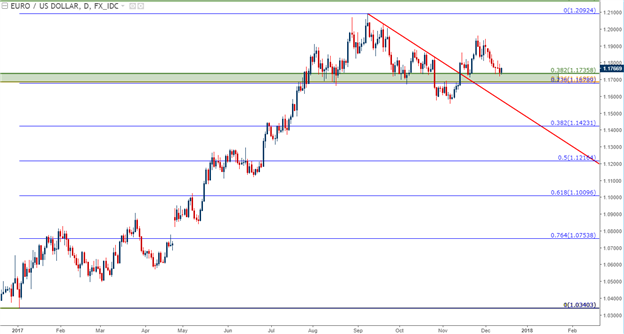 Cable has had an interesting ride throughout this year. While we came into the year with the very threatening backdrop of Brexit, the British consumer just continued to drive, surprising even the Bank of England. This has helped stoke inflation in the U.K. economy, much to the chagrin of those very same consumers.

As we approach this afternoon’s FOMC rate decision, GBP/USD is sitting on a short-term support variant we’d looked at last week: 1.3320 is the 38.2% Fibonacci retracement of the August-September bullish spike. This price helped set a quick bout of support last week, and prices moved right-back to this zone after pulling back in the early portion of this week.

Key here is perhaps a more interesting chunk of support below current prices. 1.3216 is the 50% retracement of that same bullish move, and from 1.3111 (the 61.8% retracement) up to 1.3187 (a longer-term Fibonacci retracement), we have a longer-term area of potential support. If we do see Cable breakdown from short-term support, a revisit to this longer-term zone can keep the door open for bullish plays. 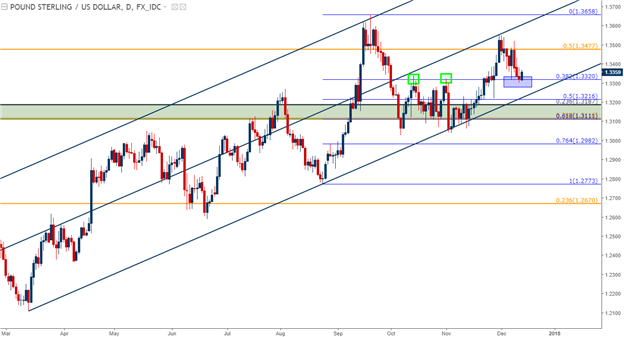 While the U.S. Dollar was getting crushed against most currencies throughout the year, the Japanese Yen actually held its own against the Greenback over the past seven months. A range has built-in as Yen weakness was one of the few themes that could actually keep pace with the sell-off in the Dollar. More recently, as that Dollar strength has begun to show with a bit more consistency and a little more prominence, we’ve started to see some bullish tendencies show-up in USD/JPY.

The longer-term range has been in-play since April. Resistance has continued to show around 114.00, which is the 23.6% retracement of the June-December major move in USD/JPY. Support has been a bit trickier, generally remaining within the 108.00-109.00 area. What makes this interesting is the recent resistance test that attempted to break-out towards 115.00, but was promptly faded out of the market. But when the range was filling in towards support, buyers-stepped in a bit early, right around the 38.2% retracement of that same move.

USD/JPY Daily: Are Bulls Anticipating a Range Break as we Move Towards 2018? 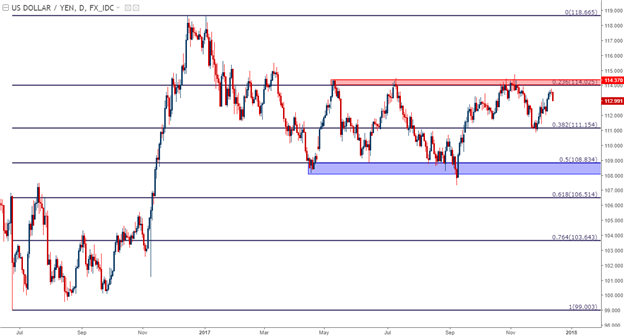 Over the past few months, the Australian Dollar has been one of the more attractive ways of looking for USD-strength. Even when the Dollar was heading-lower against the Euro or the British Pound, the Australian Dollar continued to struggle against its American counterpart. This has led to a fairly consistent down-trend over the past few months that finally found some element of support around the psychological level of .7500. If we do see a net response of Dollar-strength after today’s FOMC meeting or, bigger picture as we head towards year-end; this could be on the favored ways of trading along with that theme. 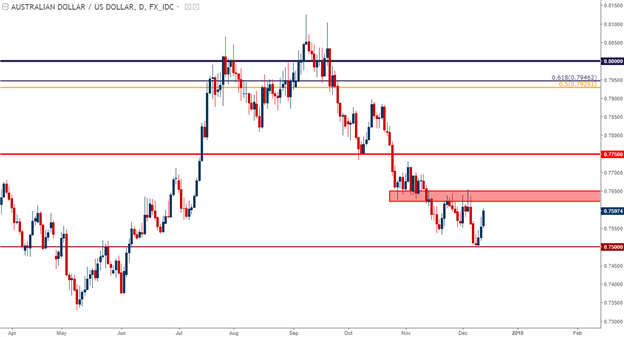 Another commodity currency that’s been on the skids of recent has been the Canadian Dollar. CAD had an outsized run of strength this summer as the Bank of Canada began to kick-up rates. But after the second hike in September, a bout of weakness started to show that hasn’t yet stopped. This ran all the way into October, at which point USD/CAD began to oscillate within a range between the approximate area of 1.2650-1.2875. Last week saw a quick visit to support ahead of the Bank of Canada rate decision, which the net impact was another run of CAD weakness.

This could be an interesting USD-proxy for themes of strength, particularly when taken with this bearish CAD response at the most recent BoC rate decision. 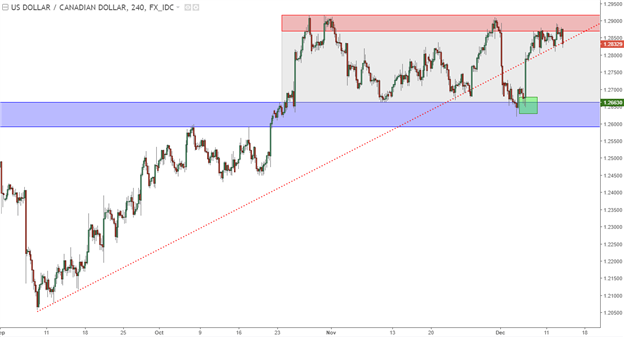