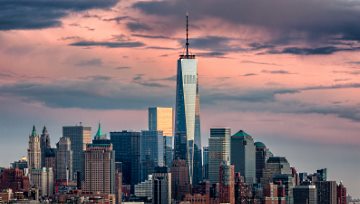 U.S. Dollar at Key Resistance Ahead of the Fed; Cable Bounce on Six-Year High CPI

- Tomorrow brings the final FOMC rate decision for this year, and a rate hike of 25 basis points is widely-expected.

- This takes place in front of ECB and BoE rate decisions on Thursday, and the British Pound is already on the move after this morning’s CPI-print.

Tomorrow brings the Federal Reserve at 2PM ET, and it’s widely-expected that we’ll see the bank hike rates for the third time this year, which would amount to the fifth rate hike since the Global Financial Collapse. This rate hike has been ‘baked in’ for some time now: CME Fedwatch continues to show a 100% probability of a move at tomorrow’s meeting, and there’s even a growing expectation for a double-quarter point move of 50 basis points, now showing at around 12.4%.

The big question for tomorrow is the Fed’s stance towards 2018, and this will be delivered via the dot plot matrix. Will the bank continue to say that they’re looking at three hikes for next year? Might they increase this expectation to four? While this might sound ridiculous on its face, given the continued improvement in the U.S. economy along with the prospect of oncoming tax cuts, this is certainly something that is possible; and that may finally evoke some element of strength in a U.S. Dollar that has been punished for much of the year. If we do see GDP and inflation forecasts pushed-higher on the prospect of tax cuts in the U.S. economy, Chair Yellen will have quite a few questions to answer during the Q&A, and we’ll likely see a net response of USD-strength as traders shuffle to price-in another potential move for next year.

Also of relevance – this is the first rate decision and press conference since we found out that Jerome Powell will be taking over at the bank when Chair Yellen steps down in February. Mr. Powell was nominated on November 2nd, just one day after the most recent Fed meeting (The Fed’s first 2018 meeting takes place January 30-31); and he will lead the bank through the rate decision in March of 2018 after taking over in February. This further adds to the ‘keep expectations for tomorrow low’ argument, as it’s unlikely that Chair Yellen will want to start any fires that she might not be able to tend to, much less proposing significant changes to policy parameters that her successor will have to manage.

As we near tomorrow’s FOMC meeting, the U.S. Dollar remains at resistance, much as we’ve seen over the past few trading days. This zone of resistance runs from 94.08-94.30, and this isn’t the first time it has tempered bullish demand in the U.S. Dollar, as this zone held the highs in DXY for the better part of three months, before temporarily giving-in to an ECB-driven breakout.

On a shorter-term basis, Dollar bulls remain resilient after that tag of resistance around last Friday’s Non-Farm Payrolls print. After touching the bottom of this zone, sellers took over to drive prices lower. But a bit of support developed yesterday morning, and this has moved prices closer to that longer-term resistance zone.

This morning brought November inflation data out of the U.K., and as we’ve seen throughout much of the year, prices continue to rise as inflation remains above the 3% figure. This morning brought a six-year high on CPI, as a 3.1% print came-in beyond the expectation of 3% flat. Given that this data was recorded during the month of the U.K.’s first rate hike in more than a decade, we’re likely seeing some element of discount as traders turn their attention towards tomorrow’s UK employment and wage data followed by Thursday’s Bank of England rate decision.

One notable occurrence around this morning’s UK inflation release was another check of Fibonacci support in GBP/USD. Last week, we looked at the level of 1.3320, as this is the 38.2% retracement of the most recent bullish move that started in August and topped-out in September. This price had twice shown as resistance when Cable was sloshing around in October-November; but after prices broke that impasse, prior resistance became fresh support as bulls took-on another test of 1.3500. That test flared-out fairly quickly, and prices had been trickling-lower since last Friday. This morning’s inflation print brought a quick support test at which point bulls came-in, and we’re now back above the 1.3350 area of short-term resistance.

U.K. data, for the most part, has remained fairly resilient throughout this year. The BoE, on the other hand, has remained extremely cautious around Brexit. The Bank of England has continually expressed fears around a slowdown from Brexit, and this has very much driven their stance of uber-loose policy and dovish accommodation in a proactive effort to stem off any weakness that may show. Even when hiking rates last month, the Bank of England continued to remain pessimistic around the U.K.’s economic prospects, saying “Uncertainties associated with Brexit are weighing on domestic activity, which has slowed even as global growth has risen significantly… And Brexit related constraints on investment and labour supply appear to be reinforcing the marked slowdown that has been increasingly evident in recent years in the rate at which the economy can grow without generating inflationary pressures.”

What this means – don’t look to the BoE for that bullish lifeline in GBP-setups, at least for now. For Sterling bulls, tomorrow may be the best shot at seeing another resistance test as strong employment and wage prints can bring bulls back to the table. The Bank of England rate decision on Thursday is unlikely to bring much in the realms of bullish drive for GBP, as the bank has been reticent to do much around non-Super Thursday rate decisions. This, taken with the fact that the bank just kicked-up their first rate hike in more than ten years, and we’re likely going to see a passive BoE until, at the earliest, their next Super Thursday event in February.

For now – the bullish channel that’s dominated Cable’s price action for much of this year remains in-tact after resistance came-in off of the mid-line two weeks ago. The short-term support around 1.3320 could be workable as we near BoE, but Cable bulls will likely want to keep expectations pegged at a minimum on Thursday morning.