ECB VP Warns that U.S. Equities Are Stretched: But How Stretched Are They?

- U.S. equity prices got another shot-in-the-arm yesterday on the heels of the Senate confirmation hearing of incoming Fed Chair, Mr. Jerome Powell.

- Over the past 24 hours, the more interesting drivers have been items that weren’t really on the calendar at all, as news of a Brexit bill combined with another North Korean missile test garnered attention on the headlines.

As we looked at over the past couple of days, this week’s calendar picks up a bit from last week’s holiday-shortened outlay. But, over the past 24 hours, two of the more interesting market drivers that have shown up were items that weren’t on the calendar at all; and this was a) the announcement of an outline deal being reached between the U.K. and E.U. on a Brexit bill and b) North Korea launching a ballistic missile into the Sea of Japan. While item a has stoked volatility with a tonality of strength in the British Pound, markets were perhaps surprisingly unmoved by the most recent North Korean test.

From a price action perspective, probably the most notable item over the past 24 hours has been the leap-higher in U.S. equity prices. Market participants seemed to enjoy Mr. Jerome Powell’s confirmation hearing at the Senate yesterday, and equity prices jumped at the open and just continued to run for most of the day. A pullback did show up around 1PM ET but just an hour later, bulls were ready to pounce on that dip and drive prices up to another fresh all time high ahead of the close. 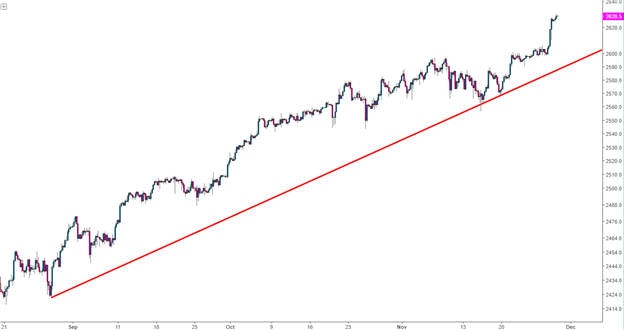 The natural question from here is whether stocks are ‘too expensive’ or, perhaps even whether we’re entering ‘bubble territory’ given the veracity of recent gains. In response, Chair Yellen has continued to opine that valuations aren’t all that outlandish given the scope of interest rates and monetary policy; and this has seemingly assuaged market fears that the Central Bank may embark on a series of aggressive interest rate hikes that could, eventually, give market participants a very strong reason to sell out of equities.

Vitor Constancio of the ECB, however, has no similar qualms. Speaking to CNBC this morning, Mr. Constancio, the Vice President of the European Central Bank said that current valuations in the U.S. equity space could spark a possible correction in global stock prices. Mr. Constancio cited the cyclically-adjusted PE ratio of U.S. equities being well-above historical averages; and the fact that volatility levels are so incredibly low by many historical standards – a troubling backdrop is created in which “some events may trigger a sudden revision of expectations by investors.”

Equity markets, at this point, appear to be rather unaffected by this warning, as US equity futures are continuing to hold on to recent gains ahead of the U.S. market open. As we discussed coming into this year, equity prices by many metrics are elevated. But, as we also said, valuation in and of itself is not a bearish thesis, as valuations can continue to stretch just as we saw in 1998-1999. The big difference that we have today that we did not have in 1999/2000 when tech stocks began to turn was a Central Bank willing to appease market participants by molding policy in order to keep the ‘wealth effect’ in order.

So, effectively, Mr. Constancio and Ms. Janet Yellen can both be ‘right’ even if it appears that they’re saying totally different things.

Current valuation levels in U.S. stocks are elevated as we can see via Schiller PE, which is a price-earnings ratio based on average inflation-adjusted earnings from the previous 10 years, often called ‘CAPE’ for Cyclically Adjusted PE Ratio. There are only two prior instances of stocks being more handsomely valued going back to 1881. The first was in 1929, and that led to Black Tuesday. The second was in 1999, and that led to the tech bust. Stocks weren’t anywhere near current levels in 2007 when the Global Financial Collapse enveloped markets. In August of this year, we crossed the 30-threshold, and prices have just continued to run as the hope behind tax cuts and a continued passive Central Bank have kept stock market bulls well-entrenched in long positions. 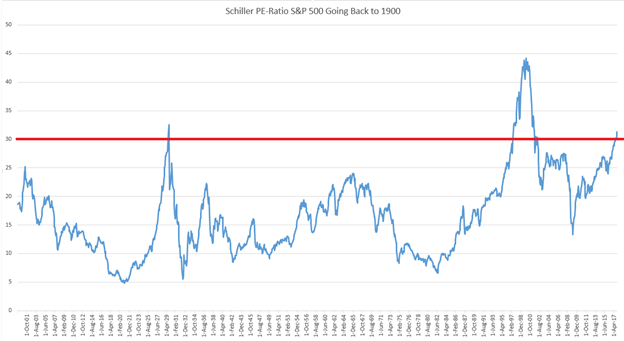 But, the S&P 500 wasn’t created until 1957, making synthetic models before that a bit divergent than what we can see with actual hard data. So, by using data from 1960 to current date, we can see that the average CAPE for the S&P 500 was 20.04, which would still be 62.9% of our current read; or, to put otherwise, current values are 59% more elevated than the historical average since 1960, with only one outlier since in which valuations were more rich. 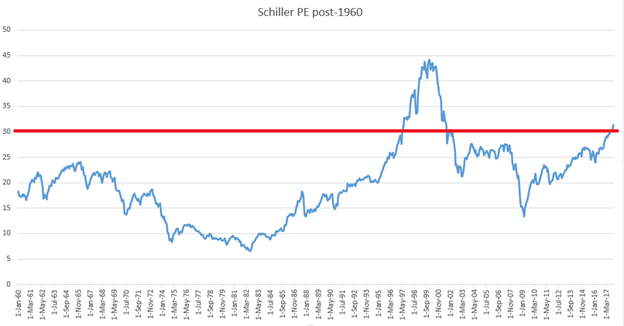 Let’s take this relationship a step further. Something very important happened in the 1990’s that continues to shape much of the change that we see today, whether it be from a sociological, geopolitical or economic point-of-view; and that was the invention of and popularization of the internet. After all, that’s what was somewhat of the initial driver to the boom and bust style of markets that have been commonplace for the past 20+ years. So, let’s go one step further in looking at stock valuations after the mid 1990’s, using 1995 as a proxy.

The average CAPE in the S&P 500 since 1995 is 26.89, so quite a bit closer to our current levels, and not quite as troubling as the deviation seen from longer-term perspectives. On the below chart, we can see Schiller PE returning to the approximate median-area of the indicator over the past 22 years; and this chart does not appear to be near as troubling as the two prior. 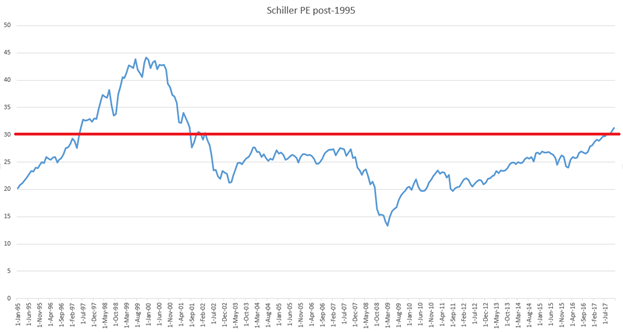 All of the above charts aren’t set up here to confuse; but rather to show that value is in the eye of the beholder – whether it’s Fed Chair Janet Yellen or ECB President Vitor Constancio saying two completely different things on the same exact topic. Investors can’t make a complex judgement based on one or two simple facts or indicators; there’s more at work here.

So, are U.S. stock prices stretched by historical standards? Yes, and that’s not really debatable as we show with data above. But - does this mean that they’ll have to come down immediately to correct this historical abnormality? Absolutely not, and this can be evidenced from the 17.3% gain in the S&P 500 so far in 2017, or the 18.5% jump in the index since just before last year’s Presidential election . Just as we saw in 1999, prices can run and run for a long time before ‘some events’ may trigger a revision of expectations by investors.

As we’ve been looking at around U.S. stocks, the buy-the-dip strategy has continued to be favored from the simple angle that it can allow risk to be managed; so that if this thing does finally begin to tip over, a short-term trade doesn’t have to become a long-term problem. We had a dip earlier in the month around noise emanating from tax policy; but that’s been soundly bought at this point. With this most recent top-side run, there has been little pullback or digestion, and there are a dearth of nearby potential support points to investigate for on-boarding additional bullish exposure. The one area of interest with current levels is a zone of prior resistance that runs from around 2595-2600. Support in this area can open the door for a ‘buy the dip’ setup, with stops investigated below the prior swing-low around 2590.

Outside of that, wait for a cleaner setup, or find another market that might not be as stretched in its current form. 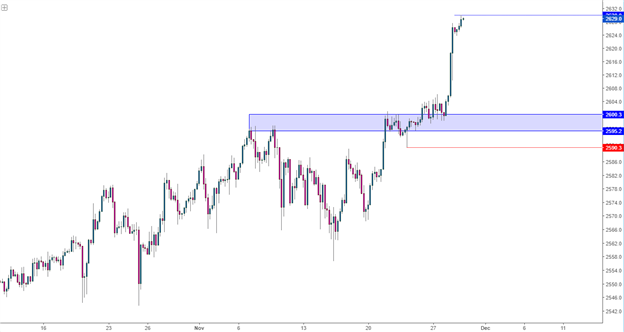