Cable Crumbles as the BoE Hikes: NFP is on Deck

- The Bank of England hiked rates for the first time in 10 years this morning, and the British Pound sold-off down to a key zone of support.

- Tomorrow brings Non-Farm Payrolls with an aggressive expectation for over +300k jobs to have been added to American payrolls. USD is holding on to recent gains ahead of the release.

At this morning’s Bank of England interest rate decision, the Bank of England hiked rates for the first time in ten years. Rates were adjusted up to .5% from a prior .25%, and while this move of tightening was the first such adjustment in over a decade (the first since Gordon Brown was the Prime Minister), the British Pound sold-off on the news as the Bank of England did not sound too optimistic around future economic conditions. 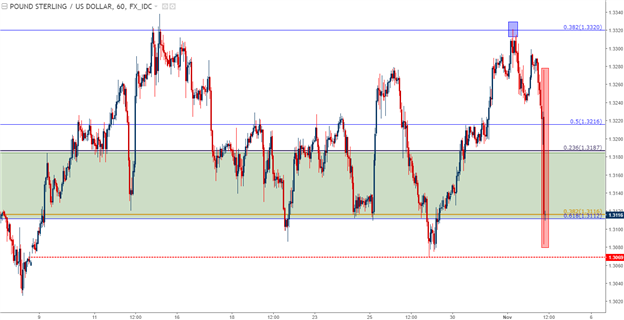 This was a Super Thursday event, which means we also received updated forecasts from the Bank of England, along with an accompanying press conference from BoE Governor, Mr. Mark Carney. It was within those projections that the driver for GBP’s moves seemed to emanate: The BoE is expecting only two more hikes going out to the end of 2020. This would speak to the ‘gradual’ element behind the BoE’s tightening strategy that Mark Carney has been openly talking about. The BoE also said that they remain cautious around Brexit, claiming that negotiations are already bearing a noticeable impact on the economic outlook.

Specifically, the BoE said: “Uncertainties associated with Brexit are weighing on domestic activity, which has slowed even as global growth has risen significantly… And Brexit-related constraints on investment and labour supply appear to be reinforcing the marked slowdown that has been increasingly evident in recent years in the rate at which the economy can grow without generating inflationary pressures.”

This does not sound like a Central Bank that has just hiked rates. This, instead, sounds like a Central Bank waiting for their economy to fall over a cliff, even though inflation just printed above 3% and unemployment remains at 42-year lows. This, combined with the BoE’s rate expectations, indicates that the Bank of England is looking at this hike as a ‘one and done’ type of move, at least for now.

After this morning’s rate hike, the British Pound sold-off to find support at a key area, and this is a zone that’s helped to hold the lows in GBP/USD for the better part of the past few weeks. So far, we’ve seen buyers step-in around this zone; but this support may not hold for too long as we’re now less than 24 hours away from October Non-Farm Payroll numbers. 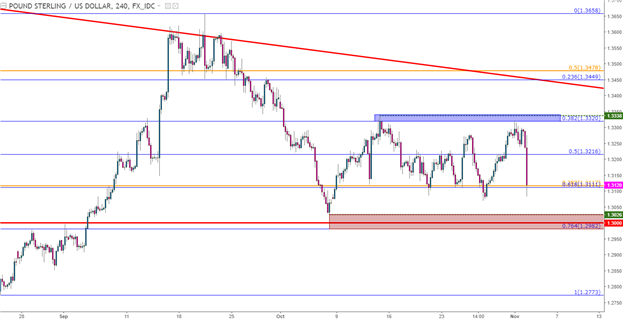 We’ve been looking at how messy GBP/USD price action has been over the past couple of weeks, and this morning’s moves have done little to clear that up. GBP/USD has been violently trading within a range since early-October, and that range has held up. Traders looking to take a directional approach on the pair can simply wait for support around 1.3000 or resistance around 1.3350 to give way before looking to trade in any prevailing trends.

GBP/USD Daily: Longer-Term Symmetrical Wedge in Cable – Let Price Pick a Direction Before You Do 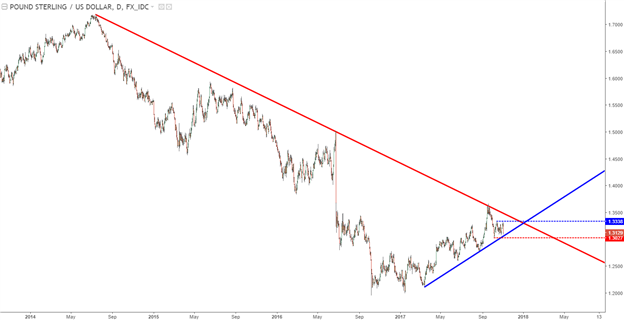 Non-Farm Payrolls is on Docket for Tomorrow

Tomorrow brings Non-Farm Payrolls out of the United States. Expectations are extremely high after the crater in September numbers as driven by Hurricanes Harvey and Irma, and markets are looking for a gain of +312k jobs added to American, non-Farm Payrolls. The -33k print that came out in early-October drove another wave of weakness in the Greenback. But that was a limited move, as a week later a strong CPI report helped the Dollar to find support, at which point USD started a rally that hasn’t yet stopped.

Yesterday’s FOMC announcement did little to deter that bullish move, as the Fed looks dead-set and ready to hike rates in December unless something goes awry. At this point, the Dollar remains just a touch off of those three-month highs, and we’ve seen buyers come-in to offer support above prior resistance. 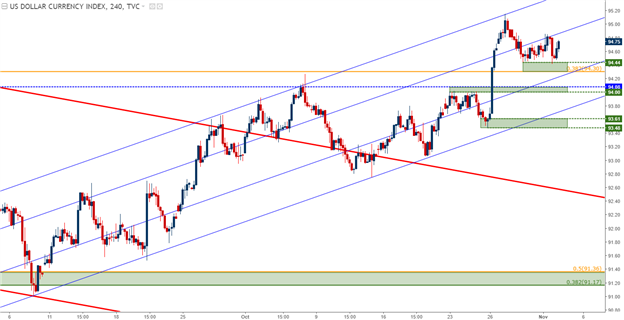 In yesterday’s article, we looked at the prospect of using AUD/USD or USD/JPY for long-USD positioning. Central Banks in Australia and Japan look to be nowhere near rate hikes anytime soon and this, combined with the technical layout in each pair can open the door for long-USD strategies.

But these aren’t the only pairs of interest as we approach tomorrow’s NFP report. EUR/USD put in a major break of a significant support level last week after the ECB extended their QE program into 2018. That move extended on the following day as we went into last weekend, but since then, EUR/USD has been trudging higher. We’re now approaching the former zone of support that runs from 1.1679-1.1736, as 1.1679 is the 23.6% retracement of this year’s bullish move. This was also the neckline of that head and shoulders pattern that was so widely followed, and this can open up a couple of interesting possibilities. For those that do want to look for long-USD continuation, this potential point of resistance can be utilized for stop placement on short-side strategies. Or – for those that want to look for USD weakness, this level of resistance can be used as a confirmation level that bulls may be on the way back, and this can open the door to top-side strategies with stops anchored below the prior low. 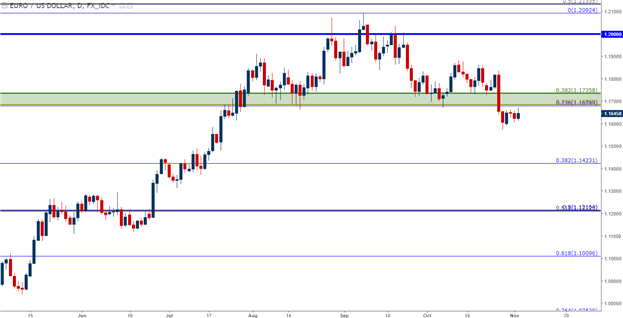 USD/CAD is also of interest, as Canadian employment numbers will be coming out at the same time as NFP. USD/CAD put in a significant reversal over the past couple of months, as the pair found support just days after the last BoC rate hike in early-September, at which point USD/CAD started a rally that’s seen as many as 850 pips added to the USD/CAD spot.

Over the past week, price action has found resistance just shy of the 50% retracement of the most recent bearish move. If we do see a pullback in this recent bullish trend, the door can be opened for topside continuation, and on the chart below, we’re looking at two potential zones to follow for higher-low support in USD/CAD. 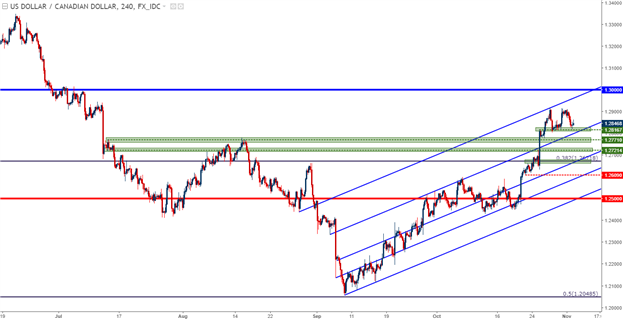