- USD Strength continues to show as DXY trades at fresh three-month-highs. Next week brings a couple of critical USD-drivers with FOMC on Wednesday and NFP on Friday.

- Want to see how Euro and USD are holding up to the DailyFX Forecasts? Click here for full access.

Next week brings a heavy outlay of drivers as we hear from the Federal Reserve on Wednesday, the Bank of England on Thursday for a Super Thursday event that carries a chance for an actual rate hikes; and Non-Farm Payrolls is released on Friday. Ahead of this outlay we have a significant breakout showing in the U.S. Dollar after yesterday’s European Central Bank rate decision. Earlier this week, we remarked that the huge zone of resistance that had held the highs in DXY over the past three months might not have to wait to be tested until we got to US GDP or even FOMC. With such a heavy allocation of the Euro in the DXY price, a down-side break in the Euro would likely spell USD-strength, and that’s precisely what’s happened over the past 24 hours after yesterday’s European Central Bank rate decision.

At that meeting, the ECB took an undeniably dovish tone, as had been the pattern from the bank in 2017. But even with that dovish drive from the ECB for most of the year, markets continued to price-in the possibility of a stimulus exit combined with the prospect of higher rates in 2018. Yesterday’s ECB meeting basically eradicated all of that: The ECB will reduce their bond purchases beginning in January of 2018, and will continue buying €30 Billion/month in European bonds. But they also said that they plan at rates staying at present levels for an extended period of time, inferred as 2019 at the earliest for any potential rate moves; and the ECB also said that they plan on reinvesting proceeds from their bond buying program well beyond the horizon of the program. 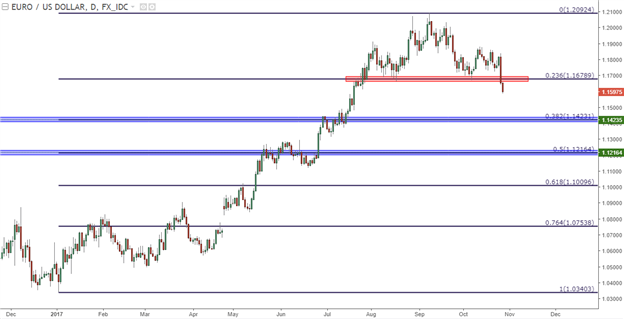 So, taper appears to be off the table, rate hikes appear to be outside of the realms of realistic discussion for the near-future, and the Euro caught an aggressive case of selling after yesterday’s rate decision. The Dollar, meanwhile, put in a significant break of a key zone of resistance as that Euro weakness was getting priced-in. 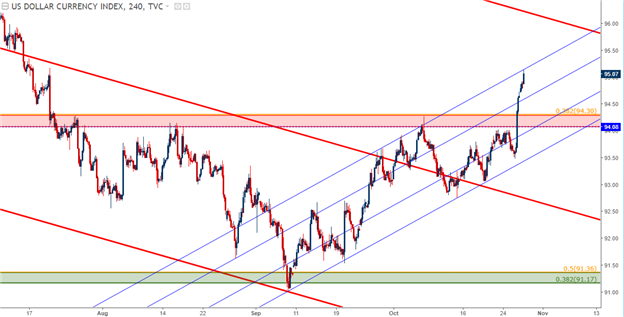 The zone of resistance from 94.08-94.30 had held the highs in DXY for almost three full months, with the daily candle from July 26 finding resistance there before the topside breakout drove through three months later. But after that break of resistance following yesterday’s ECB meeting, USD-strength continued, and then continued some more with price action making a fast approach at the psychological level at 95.00.

The 95.00 level was showing as near-term resistance ahead of this morning’s GDP report out of the U.S. That report came out rather positive, showing annualized 3% GDP growth versus an expectation of 2.6%. This gave another push-higher to the U.S. Dollar as prices ascended beyond that 95.00 psychological level, and at this point, there are potential resistance levels at 95.47, 95.90, 96.52, 97.42 and then 97.94. 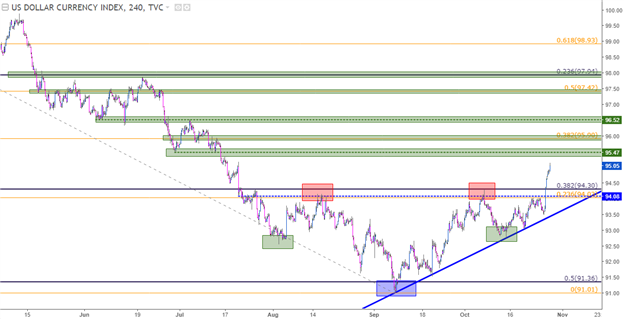 This opens the door for a continuation of USD-strength as we approach a heavy week of US-based drivers. Given the veracity with this recent topside move, traders can rightly be skeptical; and getting long at the moment presents its own set of drawbacks, as the prior swing-low is all the way down around 93.50, making trend-strategies rather unattractive given the risk that would need to be taken on to work with that type of strategy.

Alternatively, traders can wait for higher-low support. The prior zone of resistance that had previously held the highs for three months can be an interesting area to follow for such a theme. For those that wanted to track the theme a bit more aggressive, a zone of potential support from 94.49-94.72 can be used for shorter-term stances. If this does not come-in, the deeper levels of resistance can be used to look for an inflection back to a prior level of resistance (potentially new support), at which point a higher-low can become available.

Where to Look for USD Strength?

Given the down-side break in the Euro, many will likely be looking to trade a continuation of USD-strength there. And realistically, that stance can remain attractive near-term, as the recent down-side break of the 23.6% Fibonacci retracement opens the door for re-tests of 1.1500, 1.1423 and, if that’s taken out, 1.1216.

But there may be other areas of interest as well. Earlier in the week, we looked at using the Australian Dollar for this USD-strength scenario, and that move has continued to develop in a bearish fashion.

AUD/USD Daily: Aussie’s October Break-Down After Unable to Hold Above .8000 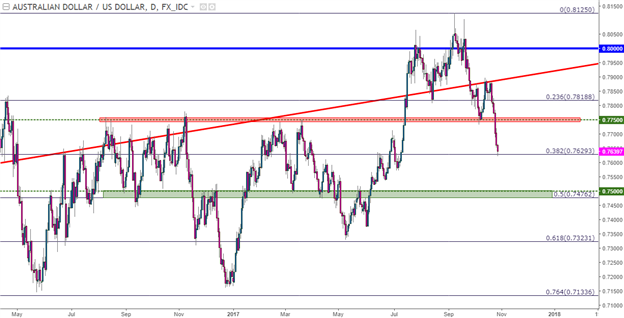 Also of interest on the long-side of USD is USD/JPY, which is in the process of testing multi-month resistance around 114.50 as we’d seen earlier in the week. Next week brings a Bank of Japan rate decision, and this could, potentially, give another push of weakness to the Japanese Yen to finally resolve this months-old range. 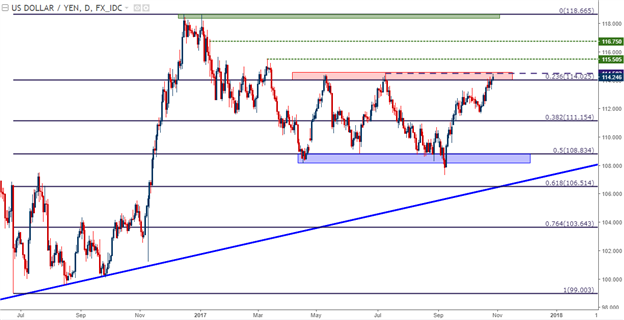 Meanwhile, USD/CAD has shot towards the moon, as a dovish BoC meeting earlier in the week has prodded additional selling in the Canadian Dollar. And when combined with this rather new theme of USD-strength, prices have been jumping-higher on the chart, giving the appearance of a 1.3000 re-test in the not-too-distant future. 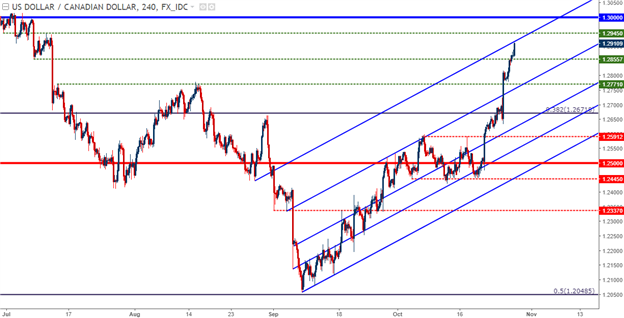