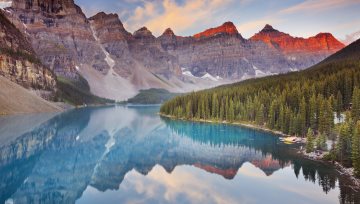 USD/CAD Marches to Monthly Highs Ahead of BoC

- Tomorrow brings the Bank of Canada’s rate decision, and the day after brings a pivotal meeting with the European Central Bank.

- USD-strength continues to show, and a re-test of a key zone of resistance appears likely as we look at a rather full calendar for the remainder of this week. US GDP is on Friday.

- Want to see how Euro, CAD and USD are holding up to the DailyFX Forecasts? Click here for full access.

Tomorrow brings a Bank of Canada rate decision, and this brings some light to what had been one of the strongest USD-trends in 2017. When the Bank of Canada hiked interest rates for the first time in over seven years in July, the Canadian Dollar drove on a spate of strength that lasted for the next two months. As we came into September, that really strong Canadian Dollar caught another gust of strength as the bank put in another rate hike, and a few days later we were sitting at fresh two-year lows in USD/CAD.

But since then we’ve seen sellers take over in CAD as USD/CAD has continued to run-higher in a rather consistent format, producing a bear flag formation as we look at in blue on the below chart.

At this stage, we’re seeing resistance show just a little ahead of a longer-term Fibonacci level, the 38.2% retracement of the 2014-2016 major move in the pair, and this comes after buyers had showed-up just ahead of the 50% Fib retracement of that same move earlier in September. This recent retracement has also included a break-above what was previously a key trend-line in the pair.

The big question around USD/CAD is whether sellers come back or whether they’ll take a back seat as the bigger picture theme of USD-strength continues. On the four-hour chart below, we’ve applied three resistance levels above and four support levels below current price action so that traders can further evaluate this theme through tomorrow’s rate hike. If we do see an upward advance, traders can look for resistance to set-in at either of the three applied levels, at which point looking to the prior level for a pullback in the effort of catching ‘higher-low’ support.

EUR/USD Remains Near Support Ahead of ECB

The day after tomorrow brings another rate decision, and this one can carry some fairly strong repercussions throughout global markets. The wide expectation is that we’ll hear the ECB begin to scale back their stimulus outlays, but the big question is by how much and for how long they might look to extend the program.

Two days ahead of the rate decision has EUR/USD remaining near the long-term zone of support that we’ve been following that runs from 1.1685-1.1736. Yesterday brought another test of the top-side of that zone which has, at least so far, held up.

But given the lack of a continued bullish response after buyers responded to support, Euro bulls would likely want to be cautious here, as we can easily see a deeper support test on the short-term chart while longer-term charts remain constructively bullish.

While USD-strength has begun to show with a bit more consistently in USD/CAD and EUR/USD, the prospect of a bullish continuation move in the Greenback has started to look a bit more likely. But – we’re still not out of the woods yet, as that rigid area of resistance that’s held the highs in USD since July remains unfettered. This zone runs from 94.08-94.30, and this area has helped to turn-around bullish advances in August and again in early-October around the Non-Farm Payrolls report earlier in the month.

Friday of this week brings U.S. GDP and this can certainly prod some volatility into USD; but we probably won’t have to wait that long, as the Euro-heavy DXY will likely remain on the move around the Euro’s dynamics emanating from Thursday’s ECB rate decision. If we do see a top-side break of this zone of resistance, targets are opened up at 95.50, 96.50 and then 97.75.

We looked at a couple of pairs just last week that could be attractive under such a strategy, with emphasis on USD/JPY and AUD/USD to look for a continuation of USD-strength.

USD/JPY remains near resistance after a strong weekend-pop around Japanese elections. We looked into this pair in yesterday’s article. On the side of AUD/USD, the pair has continued to show bearish tendencies on shorter-term charts, and we discussed those yesterday in the Analyst Pick entitled, AUD/USD Under Pressure as USD Strength Continues.