- It’s been a busy morning for the British Pound, as UK inflation touched 3% for the first time since April of 2012.

- While that stronger pace of inflation would normally be currency-positive, a set of comments from Bank of England Governor Mark Carney have driven sellers into the Pound.

It’s been a busy morning so far in the U.K. The day started early for Mr. Mark Carney of the Bank of England, as he and Sir Dave Ramsden and Ms. Silva Tenreyro appeared before the Treasury at 4:15 AM ET. Shortly after that at 4:30 AM ET, UK inflation for the month of September was released and this was followed by more in-depth testimony from Mr. Carney in front of lawmakers at 6:15 AM ET.

DailyFX Economic Calendar: A Busy Morning for the British Pound

The timing of this all appears highly relevant, as UK inflation crossed the vaulted 3% marker for the first time in five-and-a-half years, which would normally be a bullish factor for a currency that’s been prodded-higher by rate hike bets over the past month. But what is taking place this morning appears to be the exception to that rule, as the British Pound is getting clobbered as Mark Carney testifies in front of Parliament. 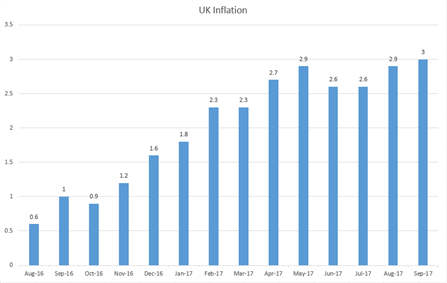 Yesterday we looked at GBP/USD testing an interesting area of resistance around 1.3320. Prices trickled lower after that article was published, but the big moves were waiting for this morning’s events, and price action has now broken down through multiple short-term supports to find buyers at the top of a longer-term support zone that runs from 1.3117-1.3187.

The logical question here might be why the British Pound is selling off so aggressively after inflation printed at its highest level in over five years, all while the Central Bank has been laying the groundwork for tighter policy options in the coming months. The answer to that would appear to be derived from that very same Central Bank, which was offering commentary throughout the morning while this inflation print was being released, effectively functioning like a wet blanket on the bullish trend that had previously shown in the currency after the BoE’s September rate decision.

Mr. Carney, as has become usual, did not sound very optimistic around the British economy as Brexit discussions continue. Those discussions appear to have hit a standstill, and now it appears as though there is an actual chance of a no-deal Brexit. Throughout Mr. Carney’s testimony, a series of comments continued to drive the British Pound-lower, key of which was stating that a no-deal Brexit poses a threat to Europe’s financial stability which, when inferred, would imply global financial stability. And while inflation remains strong, wage growth continues to lag, further pinching the British consumer that’s stayed rather resilient in the year after the referendum. Below are just a few of the comments from the DailyFX Team Live Twitter Account during that testimony. 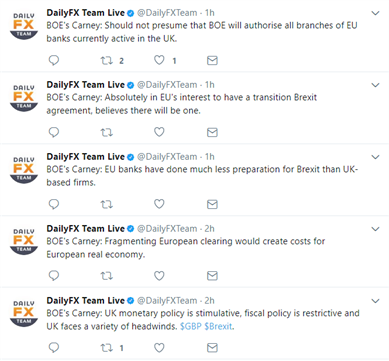 Mr. Carney taking a dovish look to markets should come as no small surprise. It was just days after that September BoE meeting, in which the bank finally acknowledged that something needed to be done about the rising inflation that’s continued to show after the ‘bazooka’ of stimulus launched by the bank after Brexit last year; that Mr. Carney came-out to push the Pound lower.

But this is somewhat of a paradox: The more dovish that Mr. Carney is, and the weaker the British Pound, the more forward-drive we will likely continue to see with inflation. This would only further pinch the British consumer, thereby increasing many of the risks that Mr. Carney is citing as the U.K. trudges through Brexit discussions.

The big question here appears to be whether bulls will respond to this long-term zone of support as we near what appears to be a highly important Bank of England rate decision on November 2nd. This is a Super Thursday event, which means we’ll also get a press conference along with an updated QIF (Quarterly Inflation Report, including the BoE’s forward-looking projections). In the past, these have been the types of meetings in which the bank rolls out new policies – and if the BoE does not move in November and they stick to this pattern of only making changes at Super Thursday events – that would mean we would have to wait for February of 2018 to get that rate hike out of the BoE.

On the weekly chart below, we’re looking at the constituents of this support zone, as the top-side of the zone comes from the 23.6% retracement of the 2014-2016 major move, while 1.3117 comes from the 38.2% retracement of the ‘Brexit move’ in the pair. Collectively, these two prices produce a zone of support that’s shown numerous inflections over the past couple of months.

On the daily chart below, we’re looking at the bullish trend that’s developed in GBP/USD throughout this year. While the first-half of the year appeared to be more of a USD-weakness theme, that strength in GBP really came to life in September after the BoE warned that rate hikes might be on the horizon. In the days following that pronouncement, Mr. Carney tempered the excitement by saying that any hikes would likely be slow and gradual; and this came with the implication that if the BoE did hike in the near-term, that didn’t necessarily mean that more might be on the way.

What initially started as a bull flag formation eventually became a full-steam sell-off. Prices quickly crumbled below that long-term support zone, making a fast-approach at the vaulted psychological level of 1.3000. Buyers stepped-in just a bit above this price around Non-Farm Payrolls on October 6th. As that abysmal NFP print in the U.S. prodded another run of USD-weakness, GBP/USD showed strength and finally broke above the bearish trend-line and then the top-side of the support zone.

Last Thursday saw another support test. Price action moved-down to test the bottom-side of the zone, which is confluent with the bearish trend-line that had previously held as resistance. If we do see support build within this zone, it opens the door for the possibility of a higher-low to lead into a bullish continuation move in the pair.

GBP/USD Four-Hour: Back to Support