GBP/USD: Sterling in the Spotlight Ahead of Carney, UK Inflation

- Tomorrow brings a couple of inflection points for GBP with a pair of appearances by BoE Governor, Mark Carney along with inflation data for the month of September.

- While GBP/USD has shown rollercoaster-like price action over the past few weeks, the U.S. Dollar may be trying to build in a move of strength. We look at that below.

GBP in the Spotlight This Week – Emphasis on Tuesday

Of particular interest for this week is the British Pound. Tuesday especially should be busy, as we get a pivotal CPI print that will help determine just how likely a rate hike might be out of the Bank of England before the end of the year. Inflation has been somewhat of a pain point for the BoE, as the bank has tried to remain uber-dovish in light of potential complications around Brexit. But as the BoE has tried to remain dovish, inflation has continued to climb, and we may be at the point where this number crosses the psychological 3% marker.

UK Inflation Bucking Up Against 3% 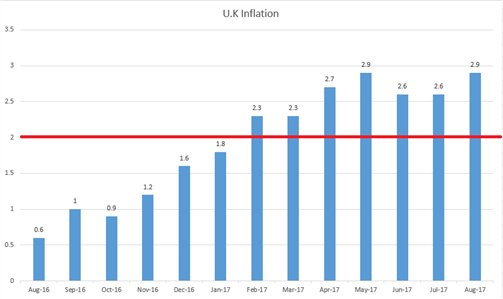 Last week saw the British Pound on a veritable rollercoaster. Coming into October, GBP was on flimsy footing as the previous bullish move looked as though it would be entirely retraced out of markets. Sterling had recently caught a significant topside bid to break above the 1.3600-level after the BoE warned that rate hikes might be on the horizon in the effort of tempering that aggressive inflation, but after support and higher-lows were unable to hold, it appeared as though a bearish move might be right around the corner.

But as USD-weakness began to show around the NFP print earlier in the month, GBP/USD firmed and price action began to put in bullish connotations again. After running into resistance around 1.3250 last week, an aggressive sell-off showed for about four hours on Thursday, but that was met with buyers who quickly re-drove prices back towards those highs.

On a longer-term basis, this puts Cable in an interesting spot. On the weekly chart below, we’re looking at a down-ward sloping trend-line taken by connecting the 2014 top to the spike-high from the Brexit referendum. The projection of that trend-line runs into current resistance, and should this short-term bullish price action continue, this would open the door for a re-test of that trend-line, which is confluent with the 50% retracement of the Brexit move in the pair.

We start off this week with the U.S. Dollar also in a fairly interesting spot. After running into resistance after Non-Farm Payrolls on the Friday before last, the Dollar was offered-lower throughout much of last week as the bigger picture down-trend appeared set for continuation. That weakness continued for pretty much most of the week as we walked into a critical CPI report set to be released on Friday, and when that number came-out slightly below expectations, another quick run of weakness showed in USD as prices moved down to set a fresh October low.

But something was different from the week prior, when that abysmal NFP print produced selling pressure into the Dollar as we went into the close. Prices found support on Friday in the hour after CPI, and price action bounced as we approached the close. The net of Friday’s price action in DXY was a Doji on the daily chart, raising the question as to whether or not we’re seeing some type of bigger-picture shift taking place here as bulls step-in to show higher-low support.

On the four-hour chart below, we’re looking at the Dollar’s recent incline that started in early-September. This move came to question after testing the big picture resistance zone that runs from 94.08-94.30, at which point sellers began to take over. A down-side break below the 50% retracement of that bullish move opens the door for short-side continuation of the bigger picture, longer-term trend.