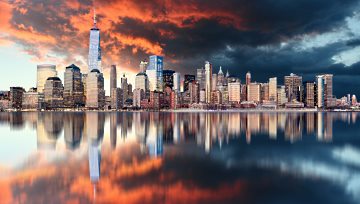 - Tomorrow brings Non-Farm Payrolls out of the United States, and expectations are super-low (+80k).

- The Dollar has been strong since the second week of September. With USD now approaching key resistance, NFP presents an opportune time for the Dollar to make-or-break with this bullish theme.

Tomorrow brings NFP’s for the month of September, and the bar is set extremely low here. After Hurricanes Harvey and Irma drove large chunks of the U.S. economy into standstill during the month, analysts decreased expectations for job creation. As we walk into NFP tomorrow, the expectation is for +80k jobs to have been added to American Non-Farm Payrolls. This is a really low number, and it may not prove difficult to beat.

More pressing, however, is the strength that’s shown in the Dollar over the past few weeks, and whether or not this has further continuation potential to reverse the 2017 bearish trend. It was at Chair Yellen’s speech last week that this theme caught another shot-in-the-arm, as she warned that near-term rate hikes may be on the docket for the Fed, even as the bank looks to begin reducing the balance sheet. While this did not bring a directly bullish move of strength, in the week since, we’ve seen bulls buying support at higher-lows while pushing prices up to higher-highs, and this gives the appearance of reversal potential as we walk into a really key data print with NFP tomorrow.

On the above chart, we’re looking at two zones of relevance. After the ECB meeting in early-September, EUR/USD ran-up to fresh highs, and brought additional USD-weakness. DXY ran into a support zone that runs from 91.17-91.36, at which point buyers stepped-in and began pushing prices higher. Since then, the Greenback has been bid and we’re now seeing the highs approach a key zone of resistance that runs from 94.08-94.30. This area had helped to hold the August highs, and if prices are able to break through here, we’ll have fresh 2.5 month highs, and the prospect of bullish continuation will look considerably more attractive.

NFP can be a prime opportunity for the U.S. Dollar to encounter this key zone of resistance; and if we do see a sustained bullish break, the door is opened for topside exposure in the U.S. Dollar as we move deeper into Q4.

Going along with that pullback that’s shown in the U.S. Dollar have been relatable pullbacks in the previously bullish trends of EUR/USD and GBP/USD. While the bullish theme is a bit more new in the British Pound, as driven by last month’s acknowledgement from the BoE that rate hikes may be on the horizon; both pairs appreciated significantly with that backdrop of U.S. Dollar weakness.

In EUR/USD, the 2017 bullish trend pushed prices up to fresh 2.5 year highs, to levels not seen since before the ECB triggered a gargantuan stimulus program. And as growth and inflation have shown with a bit more stability throughout 2017, markets have increasingly ramped-up their expectation for the ECB to begin walking away from stimulus by either decreasing the program of planning its end altogether. The current program is set to expire in December: The ECB has but one rate decision before we get to the December meeting, and this could be an opportune time for the bank to roll out what it plans to do with stimulus as we move towards 2018.

On the chart below, we’re looking at the 2017 bullish trend in EUR/USD, with current price action continuing to find some element of support in the zone that runs from 1.1685-1.1736.

This support zone is becoming well-worn. After testing this area in mid-August as the bullish trend cooled, EUR/USD ran up to fresh highs above the 1.2000 level after the Jackson Hole Economic Symposium. But as that deeper move of USD-strength began to show, EUR/USD returned right back towards this prior zone of support, and has continued to test around this area for the past week.

Traders would likely want to see some evidence of this near-term bearish move abating before looking to add long exposure, and on the four-hour chart below, we look at a couple of resistance levels that can be used to que up such a theme. If prices are able to break above 1.1788 or, for a more-confirmed move the price of 1.1833; this can open the door to bullish setups in the pair. This would be brought upon under the presumption that the near-term move of weakness is reversing as the longer-term trend plays out.

On the side of USD-strength we’ve been following USD/JPY. The Bank of Japan had another dovish outlay at their most recent rate decision, and there is little hope of that changing anytime soon. This keeps the Yen as one of the more attractive funding currencies out there, and as USD-strength has continued to build, this theme has shown rather vividly against the Japanese Yen.

USD/JPY has a big zone of prior support/resistance that runs from 111.61-112.43, with a series of levels derived from longer-term Fibonacci studies. As that move of USD-strength has developed since early-September, USD/JPY has ran-above this zone, and is currently finding support at the top-end of the area which is also prior resistance.