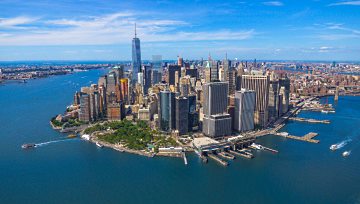 - The U.S. Dollar is facing some resistance this morning after a rigid three-day advance.

- This has shown support inflections in EUR/USD and GBP/USD; meanwhile USD/JPY is approaching a key area that could be interesting for higher-low support.

- Want to see how Euro, Yen and GBP have held up to the DailyFX Forecasts? Click here for full access.

The U.S. Dollar is catching some resistance this morning after a rather strong three-day advance. As we looked at yesterday, this move of strength in the Dollar helped to bring on retracements in those bullish trends in EUR/USD and GBP/USD. On the daily chart below, we can see the 2017 down-trend in the U.S. Dollar with emphasis on this recent advance as a retracement of that move. The zone around the August highs, running from 94.08-94.30, could be key for those looking to stage a bigger-picture bullish reversal in the U.S. Dollar. But, if we’re unable to take out those highs, and as long as we remain below that area of resistance, the bearish trend persists, and this could spell an interesting occasion to look for a turn into the general trend-side direction. 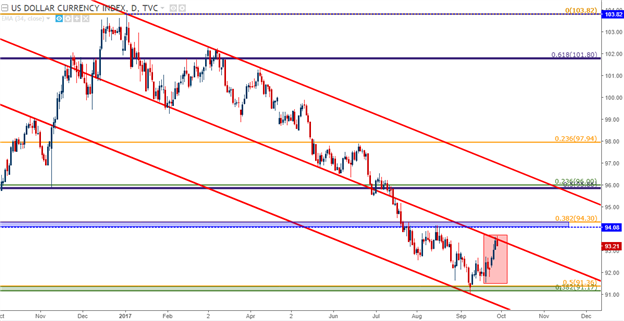 This USD resistance has shown at an interesting juncture for EUR/USD. As we discussed yesterday, there’s a big zone of support in the pair that runs from 1.1685-1.1736. This area is demarcated by two different long-term Fibonacci levels, but perhaps more importantly – this zone has shown practical usage after helping to cauterize the lows in EUR/USD throughout August. At the time of publishing yesterday, price action had just started to test the top-end of this zone. So far, that support has held up, and on the chart below we can see where a projected trend-line is likely assisting matters. 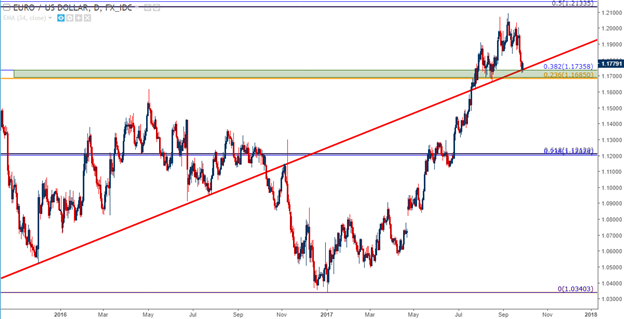 While EUR/USD had already started testing that support when we published yesterday, GBP/USD had a little ways to go before encountering the support zones that we’ve been following. AS GBP/USD began to retrace after the bullish breakout that started at the BoE’s rate decision two weeks ago, a bull flag formation had started to form. But as prices continued to trickle-lower, that support zone that runs from 1.3321-1.3350 came-in, and bulls responded by pushing prices higher. 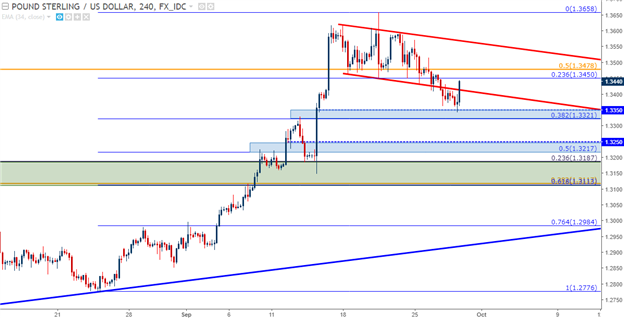 At this stage, shorter-term charts have yet to turn bullish as we’re still trading below prior points of resistance. There is a big potential zone that runs from 1.3450-1.3478; and if Cable is able to test through this area, longer-term bullish continuation will look considerably more attractive. 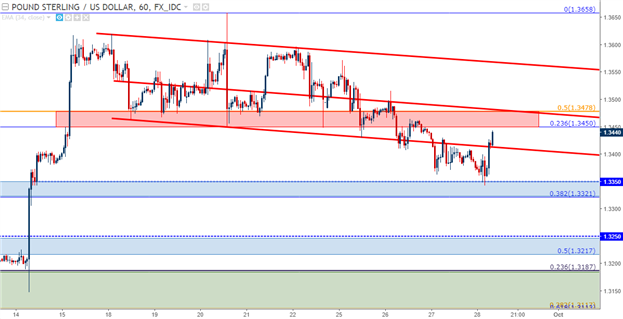 On the long-USD side of the coin, we’ve been following USD/JPY as the pair broke above a key zone of resistance. This zone comprising the area from 111.61-112.43 has been very relevant in USD/JPY price action throughout this year, with multiple iterations of both support and resistance. Price action rose to the under-side of this zone again ten days ago, and spent much of the time since gyrating through the various support/resistance levels within this area. But after yesterday’s top-side break, bulls have gotten shy, and prices look poised for a re-test of 112.43 or below. 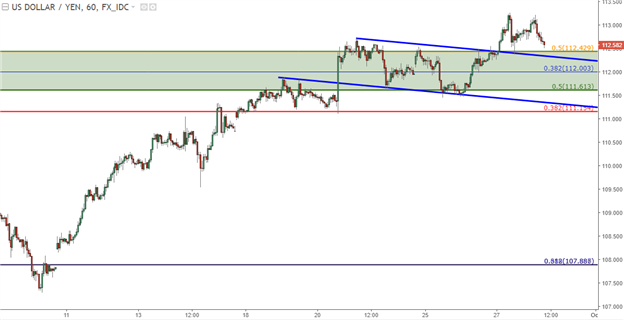 On that theme of Yen-weakness, there may be potential complications on the horizon. We previously discussed the additional political volatility facing markets after this weekend’s events, and in a move that harkens the ill-advised attempt of Theresa May to use early general elections to strengthen her support base, Japanese Prime Minister Shinzo Abe announced early general elections in Japan over the weekend.

Already, that move is looking questionable, and we discuss some of the details below.

Over the weekend, Japanese Prime Minister Shinzo Abe announced that general elections would be held a year early in a strategy that was apparently designed to cauterize support while splitting his opposition. Earlier in the summer, Mr. Abe’s approval ratings were plummeting, falling below 30% as Japanese voters became increasingly disenfranchised with the lack of economic response to the ‘three arrows’ approach that defined his initial campaign in 2012. But as worries around North Korea heated up, Mr. Abe’s polling numbers began to move-higher, and the strategy of early general elections looked to capitalize on that positive boost in order to gain another term in office.

Also of concern to Mr. Abe is the rising star of Tokyo Governor, Yuriko Koike. Ms. Koike had actually worked for Mr. Abe during his first stint as Japanese PM (2006-2007), and became the first female Governor of Tokyo in this summer’s elections. She is also wildly popular, and one of the more well-known politicians in Japan given her previous stints as a newscaster and her rather visible prior roles in government. She also has a conundrum should she want to run for the Prime Minister post: She would have to resign her role as Governor of Tokyo just months after winning the spot. This also likely played a role in Mr. Abe’s calculations.

But just days after Mr. Abe’s announcement of early general elections, Ms. Koike announced that she was starting a new party, the ‘Party of Hope.’ This changes the calculus around these upcoming elections, because previously the thought was that Mr. Abe’s Liberal Democrats would be able to band together a smaller coalition to produce a solid majority. But last night, the Democrat Party, who hold the most seats in Parliament, disbanded and called for its candidates to run under Ms. Koike’s newly created party.

This presents a clear challenge to Mr. Abe, and with those early elections just around the corner for October 22nd, we can certainly see some volatility continue build around this theme. The market impact could be fairly clear: Much of the Yen weakness that’s shown since 2012 has been driven, at least in some part, by economic policies sponsored by the Bank of Japan and driven by Prime Minister Shinzo Abe. What initially started as a bond buying program turned into a stock buying program as the country started to accumulate an unhealthy portion of the Japanese Government Bond market, and now the Bank of Japan is sitting on a monstrously-sized equity position.

As recently as July, the Bank of Japan owned a whopping 75% of the assets in Japanese ETF’s. And while the Fed has set out plans to begin trimming its own $4.5 Trillion portfolio, the Bank of Japan continues to buy at a breakneck-pace in an open-ended program with no signs of letting up. Would a new administration, would a new direction for the nation and economy of Japan look to address this growing problem? If so, we could see extreme market movements, particularly in the equity space, if signals are sent that one of the most aggressive and large buyers of Japanese stocks over the past few years is taking a back seat as political pressure continues to rise.

This is relevant because political volatility, or a change at the top leadership post in Japan could spell pressure on the Bank of Japan to at least slow down their asset purchases. This can bring a significant market bearing, as one of the primary reasons that Japanese equities have been so strong has been because of this constant stream of buying from the Central Bank. If the BoJ is forced to slow, or perhaps even at some point, stop buying stocks with newly printed Yen – this could provide a dent into those trends of Japanese equity strength along with Yen weakness.

This is still at early stage, and this situation is likely to remain fluid as we approach those general elections on October 22nd. But a Shinzo Abe loss could present an interesting dynamic for global markets that have come to rely upon an uber-dovish Bank of Japan. 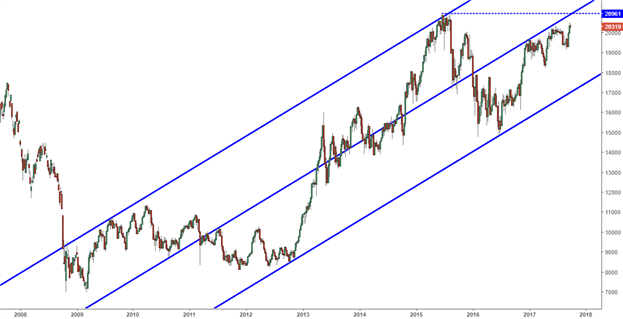