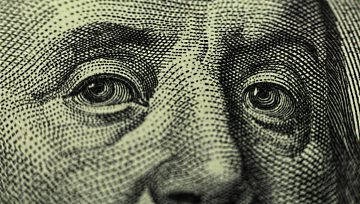 Fed Set to Start QT as the U.S. Dollar Remains Near 2.5 Year Lows

- Today brings a rate decision from the Federal Reserve at 2PM ET, with accompanying press conferences and Q&A to begin at 2:30 PM.

- The big expectation for today is the announcement of the beginning of balance sheet reduction.

Today at 2PM marks the release of the Federal Reserve’s rate decision for September, and at 2:30 the press conference will begin with Janet Yellen first issuing a statement, then taking questions from the press. The big expectation for today is the announcement of the start of balance sheet reduction at the Fed. This has been somewhat of the elephant in the room of global markets for some time now. Central Banks triggered a massive amount of stimulus the world-around after the Global Financial Crisis. The Fed was one of the first to the party, and during multiple rounds of QE saw the balance sheet balloon up to $4.5 Trillion as the bank bought bonds in the effort of keeping interest rates artificially low. The Fed announced the taper of QE3 in 2013, and this is what led to the taper tantrum as bond traders sold out of positions for fear of getting on the wrong side of the Fed (being long when the Fed gets less long of their bond holdings). After multiple assurances from the Fed that tapering didn’t necessarily mean automatic higher rates or a direct entrance into Quantitative Tightening, calm prevailed, rates settled and equity markets continued to shoot-higher.

But in the four years since, the Federal Reserve has remained as an active presence in fixed income markets. As coupons or dividends were paid from the current portfolio, or as bonds matured and principal was returned – those proceeds were continually reinvested. This has retained an active form of demand in some key asset classes from the world’s largest national Central Bank. This active demand has kept rates subdued, by the Fed’s account to the tune of approximately 1% as ‘term premium’.

At today’s FOMC rate decision, the expectation is that the Fed will announce the beginning of a change as they start to decrease the size of the balance sheet. This change will start gradually at first, as the Fed saw the consequences of what could possibly happen around the taper tantrum. Initially, the Fed is going to allow a set amount of bonds to ‘run-off’ of the balance sheet each month. This will be coming from coupon payments and principal return of maturing bonds, and this will start with $6 billion-per-month in Treasuries and $4 billion-per-month in Mortgage-backed securities. And while these amounts might sound like a lot, they pale in comparison to the $70 billion-per-month in purchases during QE3.

The Fed is looking to increase the amount rolling-off of the balance sheet until they get to $30 billion-per-month in Treasuries and $20 billion-per-month in Mortgage-backed securities. So, even at the program’s highs, this would be less than they were buying per-month during QE3. The big question is for how long this program might run: We haven’t gotten any firm answers for targeted size of the balance sheet. But perhaps even more importantly for markets and market participants: Are fixed income markets going to just trudge along as the Fed becomes an increasingly more threatening presence; or are we going to see fixed income traders evoke a taper-tantrum-like mentality, looking to sell out of asset classes in which the Fed will be reducing holdings in the coming months?

One big question, and something very pertinent for currency traders, is how aggressively might the Fed be able to lift rates after starting, and while running with balance sheet reduction? Janet Yellen has previously said that balance sheet reduction should ‘run quietly in the background’, but market participants don’t always ignore what’s in the background, often looking for whatever signal or clue might be present in the effort of not being the last one out of the door.

Markets appear skeptical that the Fed will be able to continue normalizing rate policy while reducing the balance sheet. The idea of balance sheet reduction first came into the fray at the bank’s March rate decision. At that meeting, the Fed hiked rates for the second time in four months; but they also said that “the committee currently expects to begin implementing a balance sheet normalization process this year, provided the economy evolves broadly as anticipated.” Since then, matters haven’t really been the same for the U.S. Dollar. What was, at the time, a retracement in the bullish trend that had driven USD to 14-year highs became a bearish move as sellers came-in around that March rate decision. Since the morning before that rate decision, USD has drawn down by -10.5%; a large bulk of the total -12.3% drawdown seen so far this year in ‘DXY’. 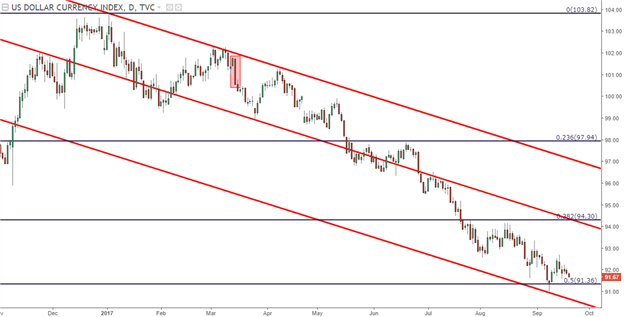 This move of USD-weakness has not been evenly spread amongst the majors. While the Dollar has been selling-off since the Fed began to shift focus towards balance sheet reduction, the Euro has burst-higher as markets try to get in-front of any potential policy tightening out of the ECB. More recently, we’ve seen somewhat of the same with the British Pound after Mark Carney and the BoE warned that rate hikes might be on the horizon. Structurally, these deviations could allow for trend continuation in each market, particularly if the Fed is limited with future rate hikes as policy tightening takes place via balance sheet reduction, and while inflation remains below the Fed’s 2% target.

We looked at EUR/USD’s continued battle at the 1.2000 psychological level, with this morning being the third separate test of this price zone in the past three weeks. Just above current highs is a confluent zone of potential resistance that runs from 1.2134-1.2167; and each of these areas can be usable for near-term directional cues. If price action in EUR/USD runs up to the confluent zone between 1.2134-1.2167, the door is opened for a support test at 1.2000. If resistance holds around the 1.2000 area, with prior highs of 1.2090 remaining respected for now, this can open the door to higher-low support at around 1.1825 or the deeper confluent zone that runs from 1.1685-1.1736. 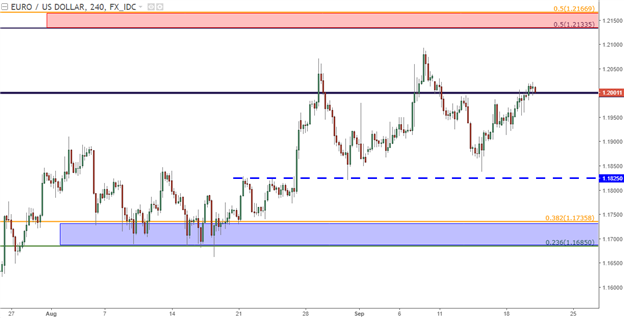 More recently, we’ve seen a bump-higher in the British Pound after the BoE indicated that near-term hikes might be on the horizon. This catapulted GBP/USD above the 1.3500 level for the first time since June of 2016, just after the Brexit referendum. The pair is currently in the process of digesting those gains, and we’ve seen higher-low support show-up at a key level of the 50% retracement of the ‘Brexit move’ in GBP/USD.

This can keep the pair attractive for USD-weakness scenarios and themes. 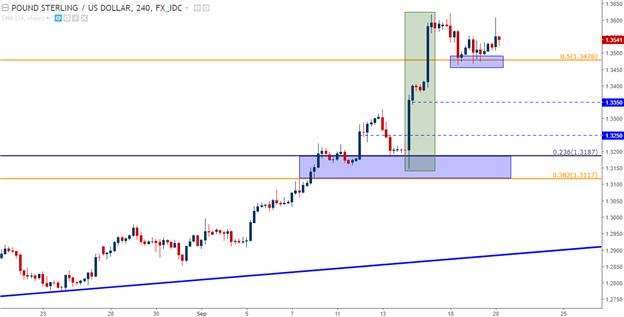 If we do see USD-strength show-up after today’s FOMC meeting, USD/JPY could be an interesting market to follow. Prices have put in a rather aggressive reversal after the five-month old range saw a downside break just two weeks ago. But that downside break was likely driven by jitters around North Korea, and as that situation has receded from the headlines a bit, JPY-weakness has begun to show again. The BoJ has a rate decision for later tonight (Thursday morning in Tokyo), and there is little expectation for any actual changes. While growth remains consistent after the revised Q2 print of 2.5% GDP growth, inflation continues to lag. The BoJ has little reason to look at higher rates right now, and traders can consider the most bullish factor for the currency a risk-aversion related theme in the event that the North Korean situation flares again. 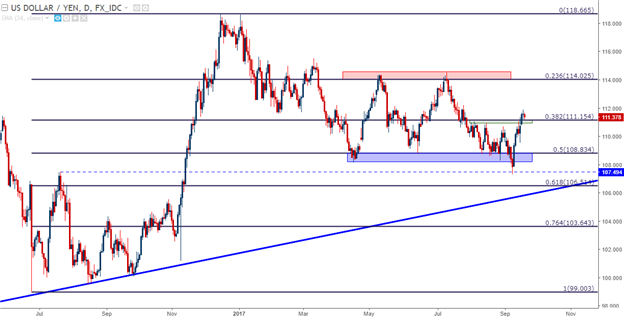