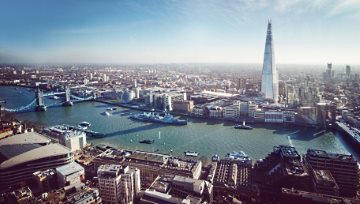 British Pound Bulls Tested Ahead of BoE; RBA Wedges Deeper into a Corner

- The British Pound is seeing some element of pullback against most major currencies this morning, as weak wage growth raises questions around the BoE’s stance towards inflation at tomorrow’s rate decision.

- The RBA appears to be backed into a corner regarding rate policy, and RBA Board Member Ian Harper had some fantastic quotes on the matter.

- IG Client Sentiment remains elevated in both GBP/USD and AUD/USD, at -2.00 and -1.72, respectively. Given retail sentiment’s traditional contrarian nature, this is a bullish indication for both pairs.

- Want to see how GBP and AUD have held up to the DailyFX Q3 Forecasts? Click here for full access.

Over the past couple of days, we’ve looked at the rather aggressive topside run that’s begun to show in the British Pound. Coming into the month of August, the British Pound was surging as expectations began to build that the BoE may move away from their extremely dovish monetary policy. But when that didn’t happen at the bank’s Super Thursday on August 3rd, sellers came back into the currency and GBP spent much of the month moving lower. But after setting a low around the Jackson Hole Economic Symposium, GBP/USD began to trend higher and that theme really began to heat up last week. When yesterday’s inflation for the month of August printed at 2.9%, the British Pound rallied up to fresh highs ahead of a pivotal BoE meeting sitting on the docket for tomorrow.

But that trend is facing a test this morning: U.K. unemployment fell to 4.3% for the quarter ending in July, and this was the lowest jobless rate in the economy in 42 years. And while this, on its face, is a good thing – wage growth remained weak, printing below expectations at 2.1%; and this is a big deal, because lacking wage growth is the primary push-point mentioned by BoE Governor Mark Carney as to why the bank hasn’t yet adjusted interest rates to account for rising. This added a bit of skepticism to the recent topside run in GBP, as this may be the ammunition that the BoE needs to justify retaining the uber-dovish stance in regards to monetary policy.

While 2.1% wage growth is above the BoE’s target of 2%, it’s still well below the 2.9% clip that inflation has been running at. This continued squeeze of the British consumer has started to show in consumer spending, and this combined with the ‘Brexit uncertainty’ that Mr. Carney has mentioned multiple times as a factor hindering business investment makes for a difficult backdrop for the Bank of England to investigate higher rate policy.

Will tomorrow see the BoE finally capitulate to rising forces of inflation? Probably not. The BoE has been reticent to make moves at non-Super Thursday rate decisions, so for any actual changes we’re probably looking at November. But – we could hear Mr. Carney warn that a hike may be on the table should inflation remain strong, and that could create some significant volatility in GBP cross-rates as traders attempt to get in-front of any potential tightening that may take place, much as we’ve seen in the Euro throughout the bulk of this year. In that scenario, established support in the region that runs from 1.3117-1.3187 could be attractive for bullish continuation plays.

RBA Backed into a Corner – Ian Harper With Some Great Quotes

In what was probably one of the more entertaining Central Banker exchanges in recent past, RBA Board Member Ian Harper gave some fantastic quotes concerning the stance of the bank in regards to the recent run in the currency. As the U.S. Dollar down-trend has deepened throughout 2017, this has lifted many major currencies, the Australian Dollar included, as AUD/USD surged above the .8000 spot rate for the first time since May of 2014. And while the trend has slowed as prices have continued to test this major psychological level, questions have begun to build as to whether the RBA may look to adjust policy to further aid growth within the Australian economy.

But after Mr. Harper’s comments yesterday, that whole idea sounds rather ludicrous. Mr. Harper responded to the question of potential rate hikes by saying: “As well as we’re doing, the Australian economy is still operating below its potential.” He went on to say, “So long as that is the case, why would anyone be suggesting tightening monetary policy when the economy is operating below potential? I mean hello?”

This further highlights the interest in keeping interest rates low, but in Australia there is another problem to consider, and that’s the elevated real estate prices that have kept the bank in a rather proactive stance in the recent past, with a heavy focus on macro-prudential policies. The concern is that lower interest rates will continue to stoke real estate prices, furthering the fear of a bubble. So, this puts the RBA in a spot where they can’t really cut rates unless there is a material deterioration of the Australian consumer, and the strengthening Australian Dollar can soon become a headwind to the resilience that’s been seen in that space.

When asked if the RBA was looking at some form of intervention to soften the spot rate in AUD, Mr. Harper again opined with a great quote: “If you’re proposing that there’s some council of intervention here, what are you going to do, try and influence the U.S. Dollar? Give me a break.”

This can keep the Aussie as an excellent counterpart for short-USD strategies, particularly as the currency exhibits further hints of sustaining the recent break above the .8000 psychological level. If we do, at some point, see a reversal in the U.S. Dollar where this runaway weakness becomes runaway strength, that paradigm can certainly flip as the RBA has not taken a defined stance in either direction, and Aussie weakness can certainly begin to show if that scenario takes place.

The fact that the RBA appears unable to make a move in either direction, with higher rates threatening to further hit the Australian consumer and lower rates potentially putting more air into the bubble of Australian real estate prices – this could make the Aussie as an excellent counterpart for positioning strategies in the weeks/months ahead; looking to latch on to whatever preeminent theme is available in the market. Of recent, it’s been USD-weakness so the topside of AUD/USD looks really attractive, but if we do see Yen weakness (or strength) take over, AUD/JPY could be an excellent venue to look for that volatility.