- The British Pound is rallying after August inflation came-in at 2.9%, feeding hopes that the Bank of England may pose a more-hawkish stance at their rate decision on Thursday.

- Meanwhile, we’ve seen a rampant run of Yen-weakness as worries around North Korea have begun to recede, but is this a legitimate reversal, or more of a corrective move?

- IG Client Sentiment continues to drop as retail traders attempt to fade this move. Sentiment is showing -2.16 as of this writing, and given retail traders’ traditional contrarian nature, this is bullish for GBP/USD.

- Want to see how GBP, USD and JPY have held up to the DailyFX Q3 Forecasts? Click here for full access.

The big item across FX markets this morning is the inflation print out of the U.K. for the month of August. Inflation came-in at 2.9%, which matches what was seen in May, and this is at the top end of the Bank of England’s expectations. This is feeding rate hike bets in GBP, and the British Pound is exhibiting strength against pretty much every major currency at the moment, with special emphasis on GBP/JPY as the pair has now rallied by more than 300 pips during its two-day run to start the week.

U.K. Inflation Driving GBP-Strength Above Target, but Will the Bank of England Respond? 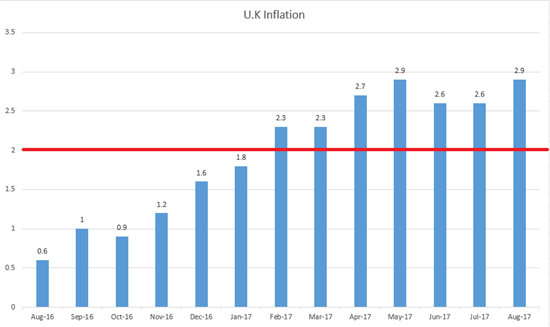 In yesterday’s article , we looked at the strength showing in the British Pound ahead of two really important drivers. The first of those took place this morning, and the second looms on the calendar for Thursday morning with the next Bank of England rate decision. To be sure, these two drivers are related : Inflation has become a push point for the Bank of England after the massive stimulus outlay triggered after Brexit started to stoke inflation within the economy. After showing annualized inflation figures below one percent in the immediate period after Brexit, prices started to climb around the beginning of this year. By February, inflation had moved above the Bank of England’s target of two percent, and in April this ran up to 2.7%. When inflation printed at 2.9% in May, it seemed as if capitulation at the Bank of England was nearing, and at the rate decision a week later, we saw a 5-3 vote within the MPC to keep rates flat. But – those three dissenting votes were the most for a rate hike since 2011, and this furthered the idea that a hawkish move from the BoE might not be too far away.

Inflation calmed in June and July, printing at 2.6%. But this morning saw inflation move right back to that 2.9% number, and the British Pound is bursting higher in response. After the August BoE meeting, Cable languished for most of the month, retracing ~500 pips from the prior high. But after setting support around the Jackson Hole Economic Symposium, the pair has started a screaming comeback that’s driven price right back towards those prior highs.

GBP/USD Four-Hour: 500-Pip Round Trip in August, Price Back at August Highs

The big question at this point is whether the Bank of England is nearing higher rates. At the Super Thursday batch of announcements in August, Mark Carney opined that higher levels of inflation may require rate adjustments. The exact line within the MPC meeting minutes is as follows: “If the economy were to follow a path broadly consistent with the August central projection, then monetary policy could need to be tightened by a somewhat greater extent over the forecast period than the path implied by the yield curve underlying August projections.’

This morning’s inflation data would make it appear as if a hawkish tilt from the Bank of England might not be too far away. But this isn’t the first time that we’ve seen this theme, and so far the BoE has appeared rather unmoved by the prospect of rising inflation in the U.K, especially considering the lacking wage growth that’s accompanied those higher prices.

GBP/USD moved up to a fresh 11-month high earlier this morning after the release of inflation data, and a really big zone of potential resistance looms ahead at 1.3500. If the BoE does make a hawkish tilt at tomorrow’s rate decision, and this could be evidenced by three dissenting votes or more, we could see GBP/USD retain strength. But if they don’t; if the BoE does what they’ve continually done since the Brexit referendum by remaining as dovish as possible, we could see this thing reverse, and that could make for an extremely interesting weekly reversal setup in GBP/USD.

On the chart below, we’re looking at a series of support and resistance levels in the pair. A re-test of 1.3500 opens the door for higher-low support at 1.3350 and 1.3250. If we don’t get that higher-high on the back of BoE on Thursday, the support zone between 1.3117-1.3187 could be usable for bullish continuation strategies. But – if we do get the bearish reversal around another dovish iteration from the BoE, a down-side break of 1.3050 opens the door for short-side exposure, with support levels at 1.2815 and 1.2595 becoming near-term targets.

Alongside this move of GBP-strength, we’ve also seen Yen-weakness come back with gusto. If matched with the move in Gold, this would appear to be more related to the cessation of worries around the stand-off with North Korea. And given the veracity of the move, how consistently gains have shown on the USD/JPY chart, this would appear to be the driver. But – this is far from a foregone conclusion just yet, as another missile test that could come at any time could derail this whole trade and send USD/JPY back down towards those 2017 lows.

Further – it was just last week that USD/JPY put in a fairly bearish indication by breaking below the five-month old range.

If we look at this move on short-term charts, such as the hourly, it’s going to look like a nice and steady trend continues to build. Prices gapped-higher to open this week, and that gap remains unfilled as the bullish trend has just continued to run. Given that prices continued in the trend-side direction for a respectable amount of time after that gap showed-up, we can say that we have a runaway gap, which is considerably different than an exhaustion gap that will often show up around major reversals in a market.

But taking a step back on the four-hour shows how this move still appears to be corrective in nature: As in, we have a lot of resistance to take out before we can say that the bulls are back in USD/JPY. A break above the resistance zone that runs from 110.65-111.15 could make the longer-term bullish setup in USD/JPY look considerably more attractive.

Combining the two above themes in GBP/JPY

Given that we have considerable strength in Sterling and fairly aggressive weakness in JPY, we could combine these themes to see the fireworks really setting off in GBP/JPY. The pair has put in a +300 pip incline over the last two days, and this is closer to ~450 pips off of last week’s lows. Just above current prices, in the zone around 147.75-145.50, we have a heavy batch of resistance that’s held the highs in the pair over three different tests since December of last year. Current resistance is showing at the 78.6% retracement of the most recent bearish move, and this can be used to plot bullish continuation strategies by looking to the 50 or 61.8% retracements for higher-low support.