Yen in the Spotlight as USD Breaks Down to Fresh 2.5 Year Lows

- The U.S. Dollar dropped to a fresh two-and-a-half year low after North Korea launched a missile over Hokkaido, Japan.

- This stoked fresh fears of risk aversion, with the net beneficiary being the Japanese Yen. Below, we look at how traders can institute strategy around the Yen to work with either direction of this theme of risk aversion. IG Client Sentiment is at +1.76 in USD/JPY, pointing to the potential for further losses in the pair.

- Dollar weakness was a key part of our DailyFX Q3 Forecasts – click here to access those reports in their entirety.

In yesterday’s article, we looked at the U.S. Dollar sitting just above the 2016 low at 91.92. The last time that DXY has traded below this level was January 15th, 2015; which is the date that the Swiss National Bank dropped the pegged-floor of 1.2000 in EUR/CHF. This was also before any of the Fed’s recent rate hikes and five months before Donald Trump announced his candidacy for the Presidential Election to be held a year later. Quite a bit has happened since then…

The Dollar came into 2017 riding high on the theme of the reflation trade, but throughout this year, hopes for stronger growth along with higher rates, driven by tax cuts and fiscal stimulus have faded into the background. U.S. data has begun to slow, leaving the Fed in the unenviable position of looking at policy normalization while inflation remains well-below their 2% target. The Fed’s apparent shift towards balance sheet reduction has investors skeptical that the bank will actually be able to continue normalizing rate policy; and more recently, domestic and geopolitical tensions have appeared to erode investor’s confidence in USD. All told, these forces have combined for a move of -11.75% from this year’s high to low in DXY. 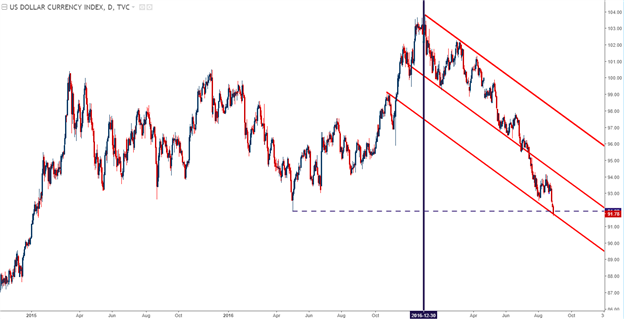 The driver behind this most recent sell-off in the Greenback came out of North Korea. DPRK conducted another missile test, and this time the launched projectile flew over Hokkaido in North Japan. This set off cold war style-alarm systems and alerts, and this certainly doesn’t help the recent stand-off between the Hermit Kingdom and the United States.

The net beneficiary of the move was Japanese Yen as risk aversion began to show in FX markets. While many are calling this a ‘safe-haven’ move, the more accurate description would likely be unwind. The Japanese Yen remains attractive as a funding currency for carry trades given the BoJ’s negative rate policy, and in times of duress, carry doesn’t look all that attractive anymore when the prospect of principal losses can far outstrip the return from the carry trade. This is likely why we see USD/JPY weakness in recent cases of risk aversion, as traders liquidate carry trades for fear of what might happen down the road.

This recent wave of weakness broke below a key level of the 50% Fibonacci retracement of the July-December 2016 major move. This puts USD/JPY price action within a zone of support that has held the lows in the pair since April. If this breaks, the door is opened to bearish continuation, but traders may want to steer those long-Yen setups towards other currencies, such as the British Pound. 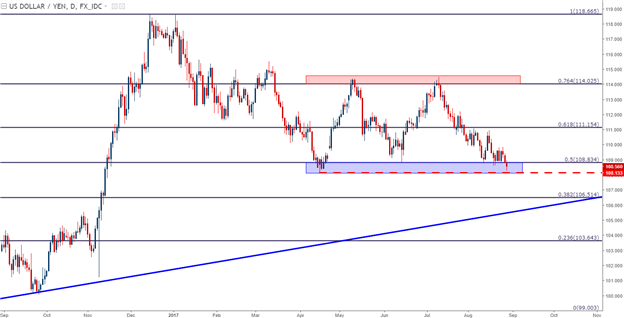 Balancing Around the Yen

Three weeks ago we looked at a hedge around the Japanese Yen to work with the recent theme of heightened risk aversion. As we had discussed, traders could focus their risk aversion outlays behind themes of Yen-strength against a perceived weak currency, such as the British Pound. Meanwhile, for those looking to fade this recent theme of risk aversion, hypothesizing that Yen weakness could be the more attractive outlet, EUR/JPY could provide an attractive backdrop given the recent run of strength in the single currency. At the time, GBP/JPY was trading just a bit above 142.50 and EUR/JPY was trading just below 128.75; and since, each has moved by more than 200 pips off each of those levels. Also of note, the topside setup in EUR/JPY is currently at short-term resistance while the bearish stance in GBP/JPY is working on support. We look a bit deeper into each setup below.

Fireworks in EUR/JPY came last Friday on the heels of Mario Draghi’s speech at Jackson Hole. While Mr. Draghi avoided any comments that could pertain to monetary policy, markets deductively read that avoidance to mean that the ECB may be looking at ‘less loose’ policy options at their next rate decision in a week-and-a-half. After Mr. Draghi began speaking, but ahead of last week’s close, EUR/JPY rallied up to resistance of the one-week high before closing for the week. But after gapping-higher to start this week’s trading, strength in the pair has continued to show as buyers have put in two separate defenses of the 130.00 psychological level, including around last night’s rise of worries around North Korea’s missile launch. In short order, bulls had volleyed the pair back up towards resistance, and as we move into the U.S. open, this resistance has continued to hold. 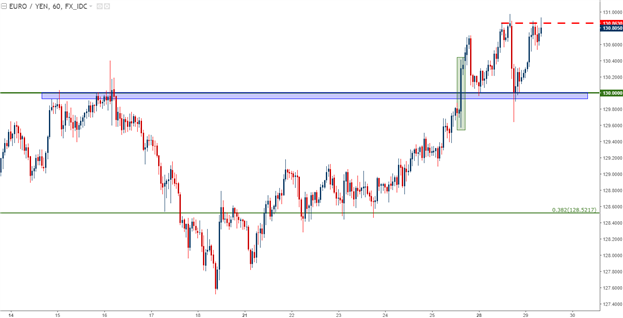 While the Euro has been really strong, the British Pound has been very weak. This can be seen from the fact that EUR/GBP is trading at fresh nine-year highs, and this relationship can be utilized in a variety of fashions for FX traders. Offsetting short Yen exposure in a long EUR/JPY setup could be one way of going about it, and that’s what we looked at a few weeks ago. While EUR/JPY has been running to fresh three-week highs, GBP/JPY has fallen-down to new two-month lows; and as of current, appears to be having difficulty sustaining a break below the psychological level of 140.00. This has produced a batch of short-term resistance that may not be able to hold, and this can open the door to a deeper resistance zone to look for entry points behind bearish continuation strategies. On the chart below, we’re looking at two potential zones to utilize for such a purpose. 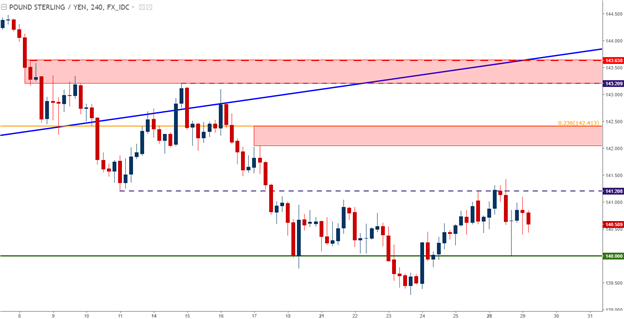