- Last week finished with fireworks as the Euro popped-higher after ECB President Mario Draghi’s comments, which seemingly avoided any topics around monetary policy.

- EUR/USD pushed up to a fresh 2.5 year high while DXY dropped down towards 2.5 year lows.

- There is one target left for DXY in our Q3 Forecast, and you can access that in-full from this link. If you’re looking for short-term trading ideas, check out our IG Client Sentiment.

Last week closed with a bang as the Euro posted a firm topside rally on the heels of ECB President Mario Draghi’s comments at Jackson Hole. This also led to another move of weakness in the U.S. Dollar, as ‘DXY’ sold-off to another fresh one-year low ahead of last week’s close. After gapping-lower to start this week, the U.S. Dollar and, in-turn, EUR/USD, quickly filled those gaps and continued in the prior trend-side direction.

There are a considerable number of drivers on the horizon that can continue to push volatility into each of these markets, as this week’s calendar is loaded with a heavy emphasis on USD news. There are high-impact US announcements each day of this week: Monday brings Trade Balance and Tuesday brings Consumer Confidence. Wednesday has the second read of Q2 GDP, Thursday brings PCE, and Friday closes with the ‘big one’ of Non-Farm Payrolls. The U.S. isn’t the only economy with workable news releases, as Europe sees German CPI on Wednesday, Employment on Thursday and an hour later – Euro-Zone Inflation for the month of August.

The Dollar sell-off on Friday got started early, just as comments from Fed Chair Janet Yellen were coming in from Jackson Hole. While Chair Yellen artfully avoided any comments that could be construed to carry any element of bearing on monetary policy, traders pushed the Dollar below prior points of support that had showed-up earlier in August (this area is shown in the red box below). This left USD on the ropes as Mr. Draghi took the mic at 3PM, just ahead of US market close. And as Mr. Draghi spoke, that bullish burst in the Euro showed-up, driving the Dollar below the prior yearly low at 92.55 (shown in orange below). 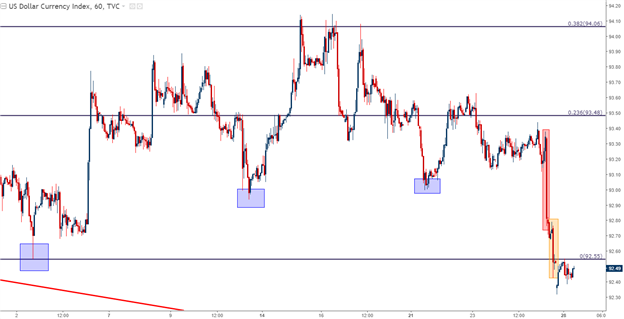 This extension in the bearish move in USD, combined with the quick entrance of sellers after this morning’s gap-fill, suggests that this move-lower in the Dollar is not yet finished. We’re nearing a key zone of potential support in DXY, as the three-and-a-half year low is just underneath current price action. This low came-in last May, and this bounce took place near the 38.2% Fibonacci retracement of a prior major move. That same major move has a 14.4% Fibonacci extension that helped to set the current top, so feasibly we could still see some element of buyer defense around the 38.2% retracement of that prior move, which is also the 2.5 year low in DXY. 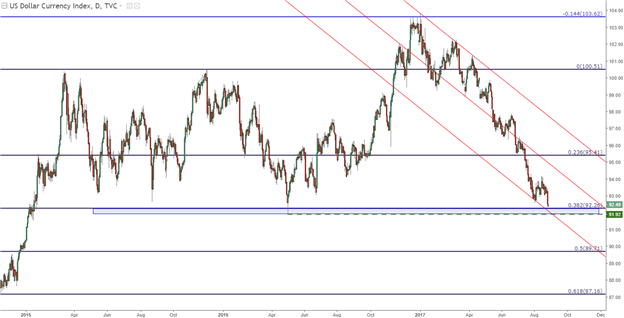 While Mr. Draghi didn’t say anything at all about a potential stimulus exit from the ECB, he did note the strength being seen throughout many pockets of the global economy. In a continuation of what we saw from Chair Yellen, Mr. Draghi used the rest of his speech to avoid talking about monetary policy, instead taking a political bent in his comments by discussing the benefits behind open markets and immigration. Markets inferred this absence of discussion around monetary policy to mean that Mr. Draghi and the ECB may be looking at tighter policy options at their next meeting in September. With the ECB’s current stimulus program set to expire in December, and with September being the last set of projections that we get before that December meeting, the ECB’s meeting in two weeks seems an opportune time to roll out any potential announcements. 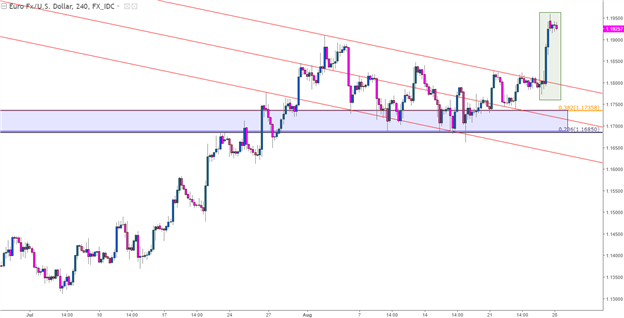 After gapping-higher in a continuation move to start this week, prices quickly-filled that gap before buyers stepped in around 1.1920. This gives us a small area of short-term support to work with, but just below this area are a few zones that could be more attractive for those plotting a bullish continuation move. On the hourly chart below, we’re looking at three potential zones of support that could be usable for such a purpose. 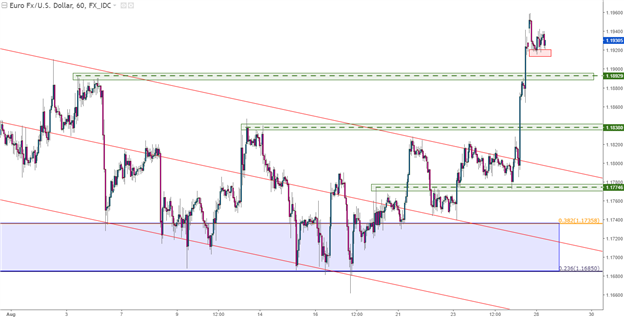 As we walked in to Jackson Hole, we noted the longer-term range that’s shown in USD/JPY. After Friday’s burst of weakness in the Greenback showed quite prominently against the Euro and the British Pound, USD/JPY remained at longer-term support of the range. While we’re still at an incredibly early stage for making any big picture prognostications, the fact that prices remain above support even in light of this recent push of USD-weakness is notable. And if we do see a low print in the Dollar at any point in the near-term, the topside setup in USD/JPY could be very interesting. On the chart below, we’re looking at that recent range in USD/JPY. Prices are working with the 50% Fibonacci retracement of the June-December 2016 major move in the pair. This level had helped to set support in June, and this is just above the swing-low that had showed in April. 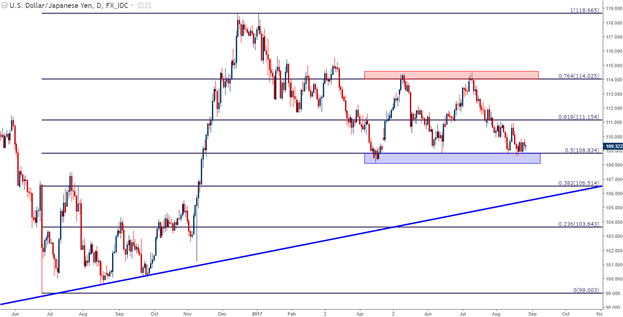