Euro, Yen and USD Ahead of Draghi, Yellen

- Mr. Draghi’s speech is at 3PM ET, well after the close of European business and just an hour ahead of the U.S. market close. This means we’re probably going to be looking at illiquid conditions across markets, and this can make for a dangerous backdrop if looking to do anything short-term in the Euro.

Today is all about the Jackson Hole Economic Symposium. While the event kicked off yesterday, today brings speeches from Fed Chair Janet Yellen and ECB President Mario Draghi. Chair Yellen speaks at 10AM ET, and Mr. Draghi speaks at 3PM. This is a few hours after the close of European markets and just an hour ahead of the close of the U.S., and this can be an especially frustrating time to look for liquidity, as many desks are already short-handed given that we’re towards the end of the summer. So, traders should be extremely careful if looking to execute anything around ECB President Mario Draghi’s speech this afternoon, as we’ll likely be looking at low-liquidity across Euro markets.

But perhaps more interesting are the potential ramifications to longer-term themes and setups. As we discussed earlier this week, last year’s Jackson Hole Symposium helped to bring some strength into what had been a weak USD throughout the year. So far, 2017 has been far more brutal than the first eight months of last year, but given that so much focus is going to be paid towards Central Bankers and their expectations around these speeches, the potential for trend change is there. Also of interest – next week’s data picks up a bit, and we’re seeing key data points released on European inflation, Canadian GDP and next Friday brings U.S. Non-Farm Payrolls for the month of August.

Below, we look at trends showing in three of the larger FX markets, along with what traders may want to look for as we go into what could be a very busy week.

Is the U.S. Dollar Carving Out a Bottom?

We asked this question last week, and since, the Dollar has continued to show support at a series of higher-lows. This could be resultant from a fatigued market exhibiting digestion ahead of Jackson Hole, but it can also be a sign of a market that’s just so incredibly stretched in one direction that we’re going to need some REALLY bad data to bring more sellers into the equation. Despite the fact that we’ve seen three rate hikes over the past nine months, the U.S. Dollar is down by more than 10% so far on the year. This is likely due to the Fed’s focal shift towards the balance sheet, and as the bank communicates their desire to begin reducing the balance sheet, markets have grown skeptical that the Fed will be able to invoke and hold to a ‘dual-tightening mandate’.

There is a lot of uncertainty here: While the Fed has been rather open with the fact that they want to reduce the balance sheet and even with how they plan to do it, they haven’t communicated priorities. Chair Yellen’s speech at 10 AM ET could help with that, but more likely we’re looking at the September FOMC rate decision to get any element of confirmed details on what the bank plans to do.

For trader’s interest – watch the area of 94.53 on DXY. This is the 50% retracement of the brutal July move, and if prices are able to trade above this level, we’d have some stronger elements denoting a bullish reversal in the currency. This can open the door for topside approaches, and as we discussed yesterday, USD/JPY could be attractive in those scenarios. 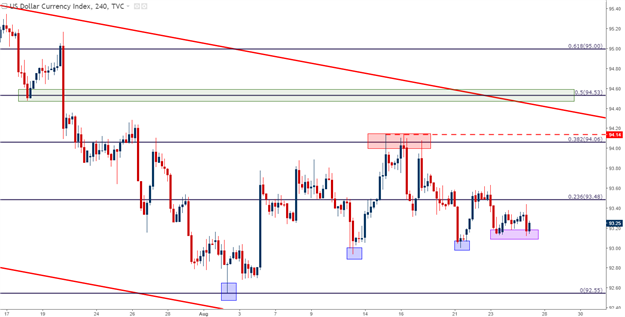 This pair will probably on the move into today’s close as we’re hearing from both Yellen and Draghi, so be very careful with risk as we go into the weekend. The big question here is whether we get a pullback in the aggressively bullish trend that’s lasted for much of 2017. The pair came into August considerably overbought, but has spent most of the month churning above a key support zone that runs from 1.1685-1.1736. Each of those levels come from longer-term Fibonacci studies and this is probably at least partially responsible for this continuation of support; but for the longer-term trend, traders may want to look for a deeper pullback before plotting those three and six-month projections.

What makes this so interesting is that, as of yet, we haven’t heard from ECB President Mario Draghi about the bank’s plans to reduce stimulus. While it’s highly unlikely that he’ll make any game-changing statements at this afternoon’s speech, the ECB meeting in September is just right around-the-corner, and with the ECB’s stimulus program set to end in December, time appears to be running short.

The key area of interest in the Euro is whether we can see a pullback in the bullish move, as brought upon by Mr. Draghi or perhaps from next week’s series of CPI prints out of Europe - in order to plot bullish continuation of the longer-term trend. Below, we look at two support levels below the current zone that traders can follow. 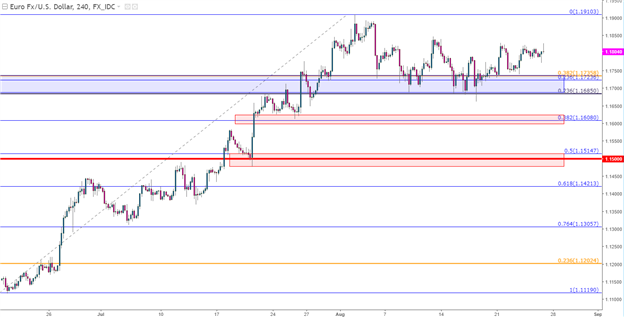 Will Long-Term Support Hold in USD/JPY?

While the Dollar has gotten crushed for most of 2017, USD/JPY has spent a good portion of the year in a range-bound pattern. While that weak USD showed up quite well against the Euro, the British Pound and even against commodity currencies such as Canadian or Australian Dollars, USD/JPY has been sideways for the past four months.

This shows that, should the Dollar find any element of strength, pairing it up with a weak Yen could be an attractive way to play continuation of that theme. We wrote about the range in USD/JPY in yesterday’s Market Talk, and we discussed it later in the day in our webinar along with some strategy points of what to look for. Below, we’re looking at the updated setup in USD/JPY. 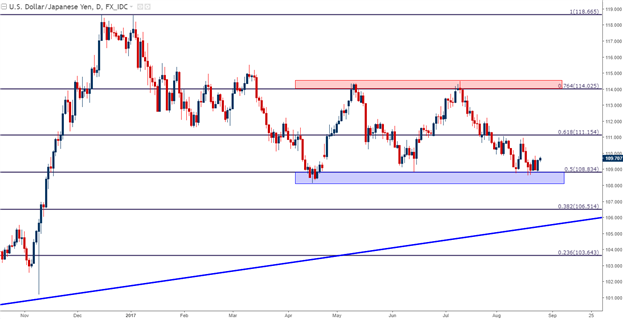